What Was Never Meant to Be

I know the doll is around here somewhere. Without it my daughter will not go to sleep. I search everywhere as I have her in one arm, blanket in the other. She rubs her eyes with little hands and says “dollllll”. I know baby. We’ll find it. It’s 9:23 AM, close to nap time.

I ascend the stairs trying to reassure her that we will find the doll when she awakes. She let’s out a cry that I can only interpret as meaning she’ll have none of that. Down the hall to the nursery we go, and what do you know there on the floor is the stuffed doll we’ve been searching for. Nothing is lost forever.

Where has all the time gone? I turn 30 in a week or two, yet I don’t feel any different. It doesn’t seem that long ago that I was working security at one of the honky tonks downtown. I was fresh out of the Army and not afraid of anything. I’d sit up on the balcony, watching the crowd below for any signs of trouble. Every now and again this girl, prettiest thing I’ve ever seen in my life, would break away from her friends to come take the stool next to mine on the balcony. I’d watch as she’d mosey up them stairs and on over to me and lean in close so I could hear her over the music. I never wanted her to go. Who could’ve imagined way back then how it would all unfold. That there’d be a time when we’d have two beautiful children together. I still remember those times like it was yesterday.

Every day that comes and goes it’s like I leave a little piece of me behind. Breadcrumbs to serve as a guide if I lose myself in the dream halls of memory. If only there was a way to stop time…. 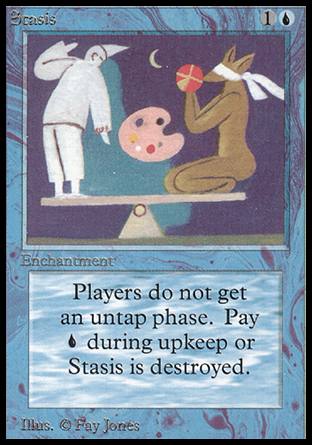 I haven’t played since August, when the Music City brethern and I decended into the pit at Player’s Ball. Beer was spilt, decks re-sleeved, and friends from far and wide gathered in the spirit of community. The two days in Chicago stood in stark contrast to the ugliness that has crept into our unsanctioned lifestyle. Yet my mind was made up. Player’s Ball was the last event of the year for me. I would take a break from the world of 93/94 magic, and spend the afternoons I would otherwise go to meetups at home with my family.

Although I took a step back from my involvement in Old School, including this blog, I haven’t been idle. I had to find a way to stop time after all.

For some months now I’ve been acquiring the pieces I needed to transition my Erhnamgeddon deck into Stasis Prison. We all have our reasons for choosing the decks we play, and mine was beauty. There are many obscure cards not readily seen at most Old School gatherings, passed over for more efficient and inelegant options yet not wanting for beauty. Cards like Hurkyl’s Recall, Mana Short, and Time Elemental. Truly showcasing the concept of synergy, that the sum total could be greater than the individual pieces themselves, all these cards had a home in Stasis Prison. 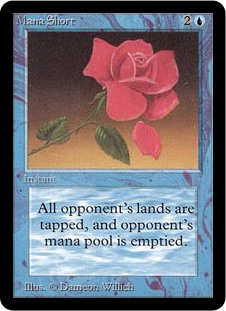 Ever the journey moreso than the destination, the deck took form slowly. Finding the card Stasis itself was a challenge. It’s become increasingly difficult to find black bordered cards and even more expensive to acquire them. What Alpha and Summer cards I had were sold or traded off for Moats and a Tabernacle.

When it came time to finish my playset of Howling Mines, there was one copy of this card in particular I wanted to find. One of the first old school cards I ever had. I’ve owned it no less than 3 times, having sold it, traded it away and bought it again when it resurfaced on eBay. I reached out to the last owner of this card, a great friend in the state of Missouri. When I heard back from him that yes he still had it in his possession and would trade it to me for a suitable replacement for his cube, I couldn’t believe it. A week or two ago I received a bubble-wrap mailer that couldn’t have made me happier if it were a Black Lotus inside. 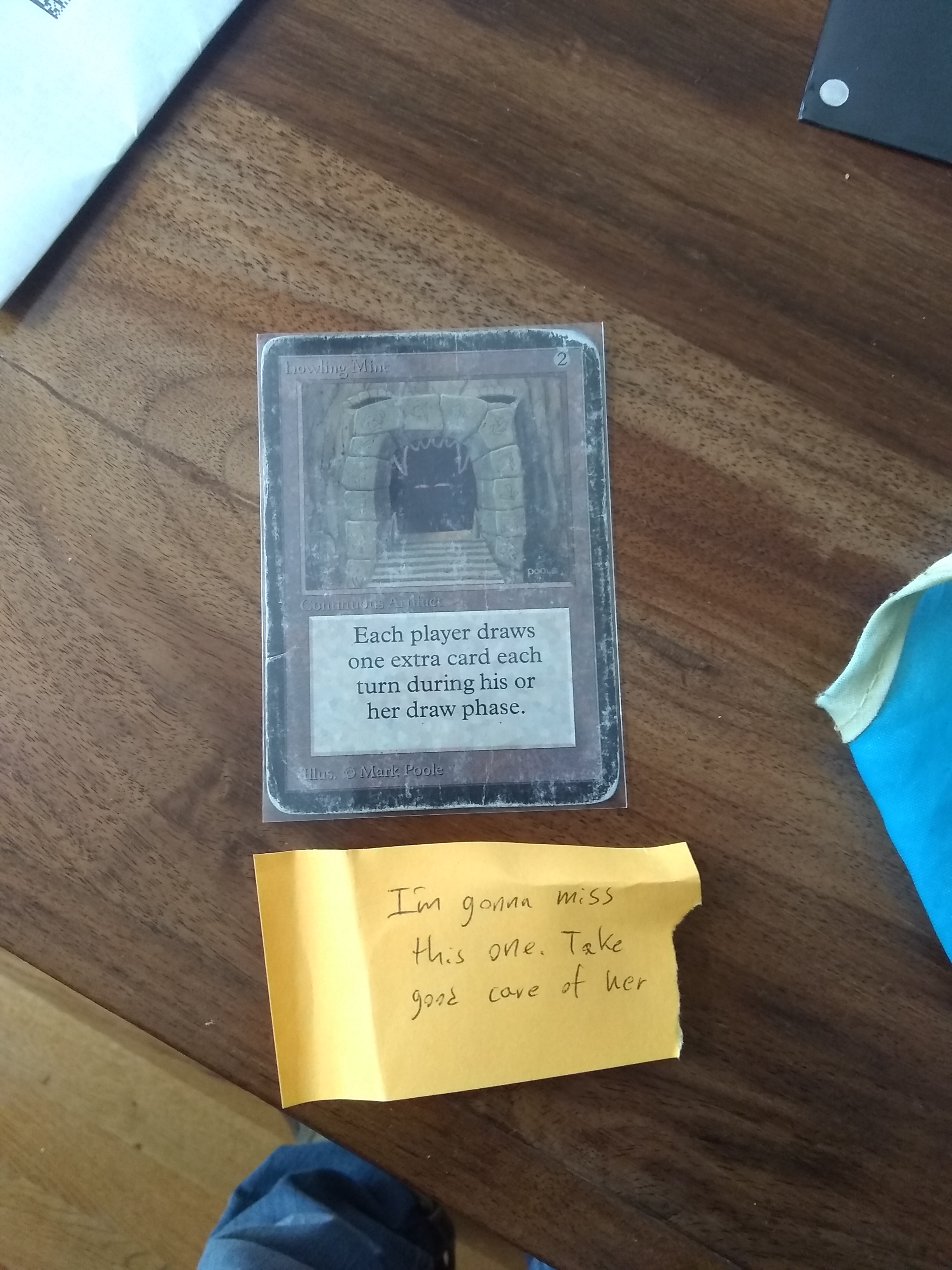 Now that this lost piece of my past was found again, there was very few non-power cards I needed. I’m not sure I’ll ever own a set of power nine, it’s become something of a unicorn to me. Luckily we are playing where Collector’s Edition is accepted and they’ve done their service as placeholders for now. For everything else, seeking out and acquiring these ancient relics has been part of the joy of the experience for me. Doesn’t matter if it takes a few months or years, with no destination in mind there’s nothing but time. Most of my nicer pieces have been the result of a few trades and sales, and that makes the acquisition all that much more sweet.

One card remained elusive, moreso than the others. The enigma known as Time Vault. From the great art to the unique effect during play, I’ve always wanted one and the ability to use it effectively in Stasis was a large part of wanting to build the deck in the first place. I came close to buylisting for one, but I didn’t like the signature on it. I love signatures in general, but I don’t know if it was the placement or what but it just didn’t vibe with me. That was someone else’s signed Time Vault, not the one meant for me. I would get mine signed when I could shake Mark Tedin’s hand myself.

As another month passed, a Time Vault seemed further and further away from my destiny. Prices went up again, and my binder was unusually bare. Overtime wasn’t as plentiful at work and I sold some of my trade fodder for other things. Sometimes when I had a rough day or had something I couldn’t get off my mind I would flip through my binder and look at my Stasis deck. It had been a joy filling the empty pockets over the past few months with the missing pieces. And now, so close to finishing what I had started, it seemed like it was not meant to be. Just too much equity tied up in cards that don’t translate well outside of this one deck. Buying Swords to Plowshares or a Time Walk is a great investment because those cards will go in any deck I’m likely to play. A playset of Stasis is only going in one deck, a deck I might only play if I’m bored with Erhnamgeddon.

So I came to the decision that the deck would never be finished. There was too many other things going on in life to invest more resources into the deck. The pieces unique to my Stasis deck are now gone, only a memory of what once might have been. 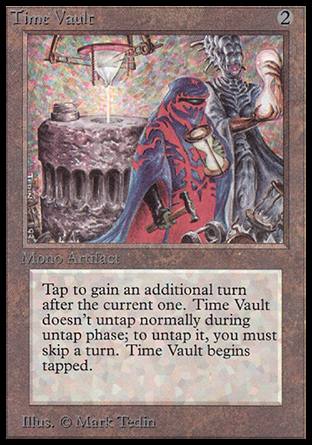 My eyes opened in the darkened nursery. I looked down at my baby girl, blissfully asleep in my arms. The clock said 9:31. Right on time. I laid her with her doll still clutched in her tiny hands in the crib and covered her up with her blanket. I had to get to sleep myself, with another night at work looming over me like a black cloud. Yet when I laid her down I was suddenly paralyzed by the realization that there will only be so many times I have the opportunity to rock her to sleep. I will grow old and she will become a woman and leave out into the world on her own. This moment will become another memory, and one day that will be all I have. Everything that has a beginning has an end. And as these moments blossom and wither they are all the more beautiful because they won’t last. If only I had a Time Vault to store these precious seconds before they’re gone….