Over Cokes and a Cigarette

It’s rare these days to have a moment to myself, where I can sit in quiet and sift through the endless weave of thoughts. Once I believed I knew where I stood on earthly matters. I had opinions on politics, religion, current events. When I was younger it seemed important to finalize everything, as if life was always just around the corner and I had to get there. It now seems more empowering to say that I don’t know, as in not knowing everything is to be gained. Everything is possible.

So here in a rare moment of silence unto myself I sift and weave. I have discarded nothing, no, indeed some things have struck me like a thunderbolt. Some things have changed the world to my eyes and cannot be undone.

Wow, that’s heavy. I’ve given a lot of thought as to what that means, but grasping the meaning of words is like trying to scoop up the moon from it’s reflection in a pond. The virtue is intangible, but when you see it you just know.

I wanted to share a short story, one that I promised to tell a while back. The story of how I came to possess my Alpha Chaos Orb. 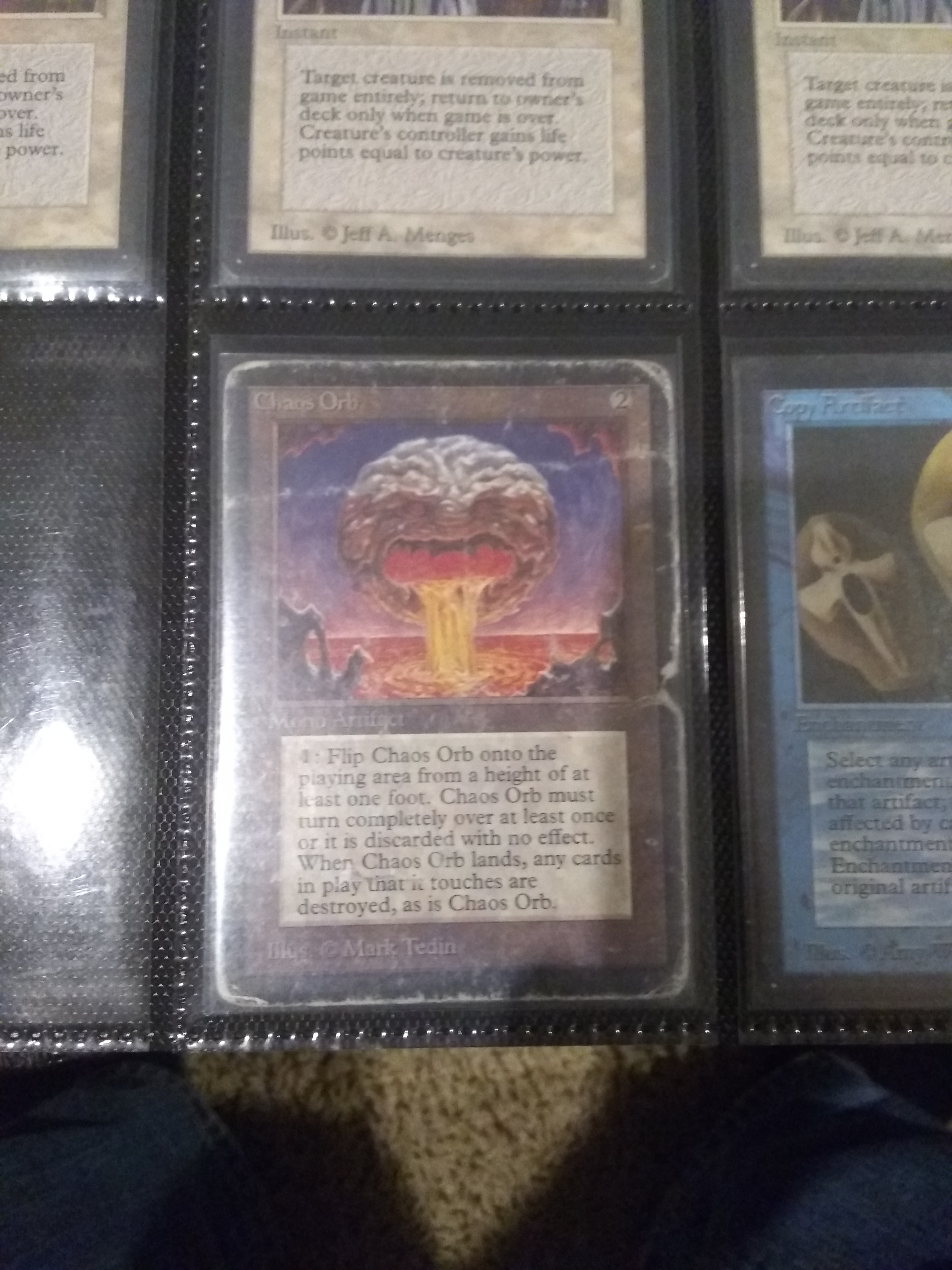 She’s a beauty! I will never, ever sell this card. It’s worth much more than any dollar amount someone could offer. I’m no professional grader, but I think it could be considered “damaged”. It has little worth perhaps to a collector or investor, but it’s worth a hell of a lot when you’re holding a Swords to Plowshares and you’re staring at a Black Knight across the table.

There used to be a little old brick house down in Columbia, Tennessee that was to be refashioned into a card shop. Back when I used to frequent such establishments I’d go down there to rumage through long white cardboard boxes of the early sets in search of gems for my Old School collection. I remember the elated feeling of finding a Beta Shatter. I got my first Mirror Universe there out of the glass case.

The owners, a husband and wife, were bout the nicest people you could meet. We’d haggle over a small stack of the good stuff, and I’d always add “and a Coke” out of the cooler behind the counter. New (old) cards in hand I’d sit out front with Alan, the owner, and over Cokes and a cigarette or two I’d listen to him reminisce about “the Gathering” and early 90s Magic in the South.

Most folks around there understandably play Standard and Modern, and a little Commander. I remember Alan telling me as I showed him a newly acquired black bordered Nightmare that cards back then had “soul”. He didn’t care much for the newer sets, having given up playing a long time ago.

As my brother and I set our sights on our first old school tournament in Chicago 2017, I flipped through my binder showing him my deck, where there was only one empty pocket.

“That’s gonna be a Chaos Orb one day”, I told him.

“Is that even legal?” He laughed. “I haven’t heard that card mentioned in years”.

Yeah, crazy right? And you actually have to flip it on target! I hadn’t been able to track one down as of yet. My whole deck was black bordered, except the Lotus and Jet my brother and I went half in on. I was holding out for an Alpha or Beta.

We finished our cigarettes and I was getting ready to head home when he told me he’d have something for me in a few days. I thought he was talking about a Hellfire, the card that was the object of my afternoon search but one hadn’t turned up digging through the Legends box.

Two days later I returned on a rainy Tuesday after work and he got a big smile on his face as he laid out the most beautiful card I had ever seen on the counter.

“Holy shit, is that an Alpha?”

“Yep. From when I first started playing.”

Then in an unfathomable act of generosity, he told me it’s mine.

That it would make him happy just to know it would be played again.

I offered to buy it, but he refused. Out of all the cards he sold to fund his store, this was the one he kept. It had seen battle, unsleeved, many times before. Many a Shivan Dragon or Mahamoti Djinn had been laid low by this Orb from twelve inches above the table. And now, it had been passed to me.

How can you show an appropriate amount of gratitude for such a gift? I left the store that day, my deck complete, but even more importantly I had been shown what the spirit of Old School was all about.

Alan and his wife have since sold their store and retired from what I hear. I hope they are doing good but I wouldn’t even know how to get in touch with them. I’ll forever be grateful for that simple act of kindness, and hope I’ve kept that spirit alive and have given more to this community than I have taken. It’s not about the cards to me, for the Perfection of Charity states nothing has been given at all. The cards are only a vessel for us to express our best self to others. Maybe that’s what the secret to it all is, Magic isn’t a game that can be played alone but only shared can it be truly experienced and enjoyed.

Or maybe I just don’t know, but either way these cards sure got soul….