I Won Players Ball and Had Fun Doing it

Okay, so right out of the gate, I didn’t win the 2019 Old School Players Ball. That honor went to mage West, who ran what amounts to a white burn deck that forces you to play 24 rounds of Magic in an 8-round tourney. That tale is recounted here: https://www.eternalcentral.com/story-time-at-the-old-school-players-ball/

When I say I won, I mean that my expectations for the day–and the entire weekend–were far exceeded. From the Friday night hangout and my fellow B&B mates to my deck’s performance and the quality of games on Saturday and my eventual record, OSPB was one of the best Magic weekend experiences I’ve had.

First, I have to say that our hosts–the Lords of the Pit–were endlessly hospitable and deserve the highest praises for putting on The Ball and the associated happenings. I had a chance to catch up with Moss and Carter–a pair of dudes that I first really hung out with back at the beginning of the summer at our own Bootleggers Ball. Carter and I nerded out on our shared love of Rush and other prog rock, while Moss (another big Rush fan) took me to the woodshed at the DMen Taproom with a Middle School Slivers list. 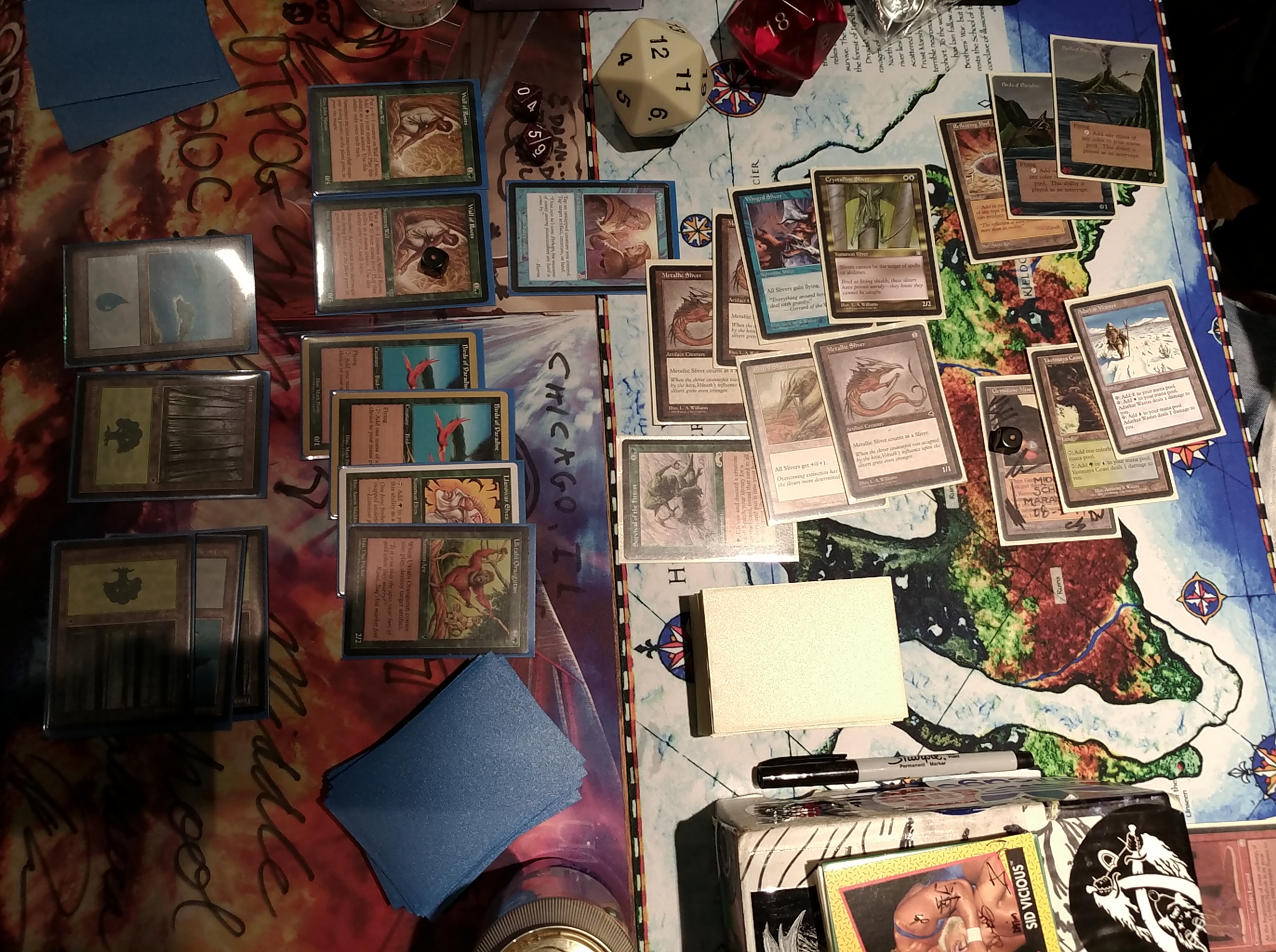 Opposition doesn’t do much if there’s a Shroud Sliver on the other side of the board.

I look forward to the next time we convene. Beyond just me, though, several in our group have developed good relationships with several of The Lords through philosophy, punk rock, record players, and old cardboard. Our respective tournaments seem to bookend the summer, with dates on Labor and Memorial Day weekends. Truly, Nashville and Chicago seem to be the Minas Tirith and Minas Ithil of Old School in the Middle West–maintaining the character of the format and keeping watchful eyes over all lands in between.

White is the meanest color in the pie. 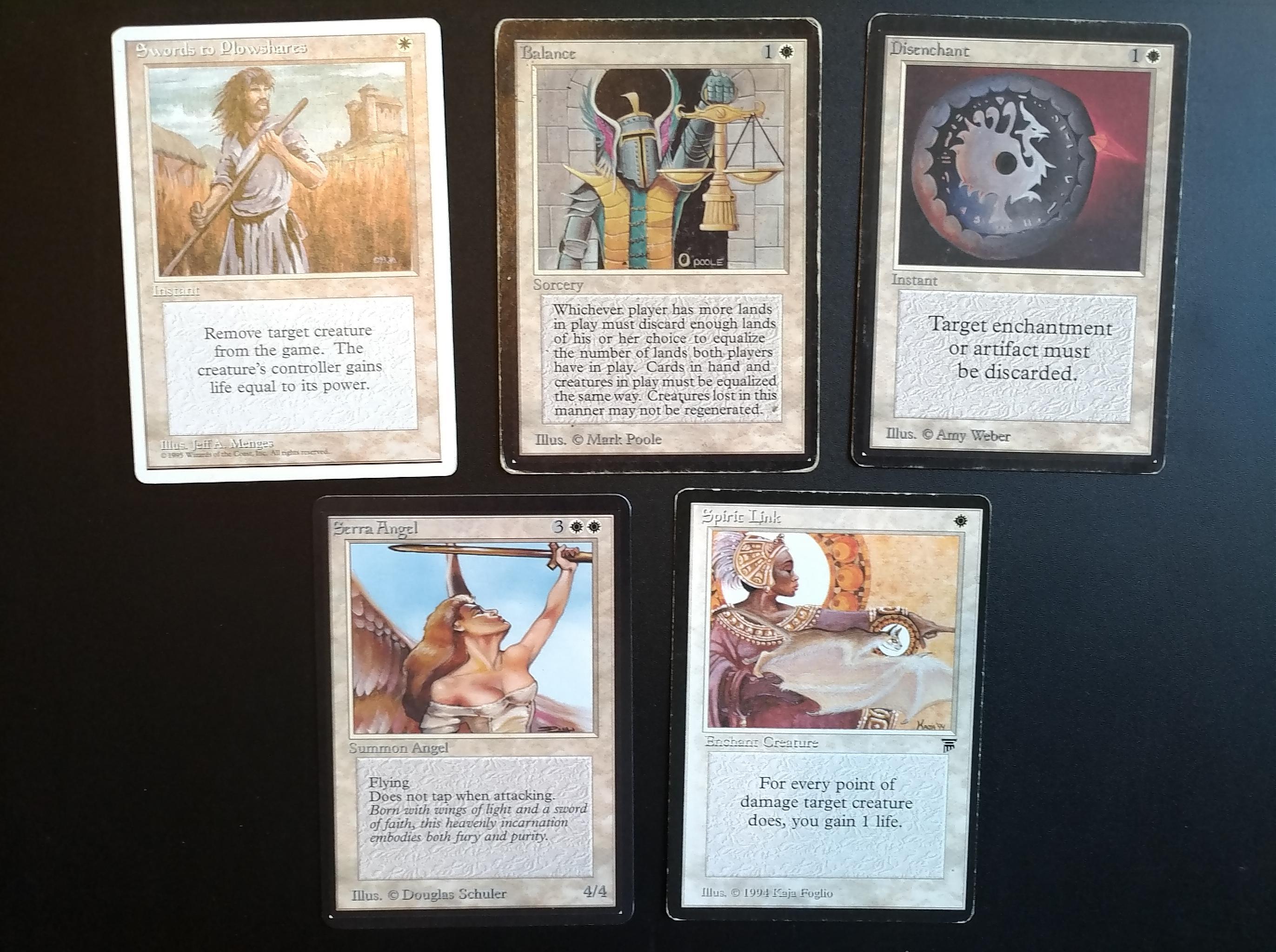 Heaters and beaters. Playing these was a privilege.

White has the best removal in the game. End of story. My deck ran 4 Disenchants, 4 Swords, and a Balance that was clutch. Serra Angel is an incredible creature that laughs at Meekstones, Moats, and Paralyze (not that I saw any of those…). But Spirit Link was something I debated on right up until the night before The Ball.

Originally, I worried that Shops was going to be running rampant. It was a summer that saw lots of talk and lots of results. There are a lot of good artifact decks in the Music City meta also, so I originally played a single Dust to Dust main. It just never felt right, though. On the eve of Players Ball, I decided that I liked gaining life more than I liked 2-for-1ing artifacts. That turned out to be a good decision, as Spirit Link allowed me to solidify games and functioned as a 5th creature removal spell. But most importantly, I felt good inside about that choice.

My approach to deckbuilding often involves the inclusion of fun-ofs–single cards included in a list that just seem to check the right boxes for how I want the deck to FEEL. This is more a decision rooted in spice than it is settling on an optimized list designed to elbow drop off the top rope. My deck featured several fun-ofs: The aforementioned Spirit Link, plus Psionic Blast and Icy Manipulator. Each of these cards were answers to weaknesses I saw that I needed to address. But I also just wanted to run them because they made me feel good. It made me feel even better to see each of these cards do work when it came to the games in my 8 rounds.

Third, the games. OSPB was 8 rounds… For most people… I, on the other hand, wound up with an inadvertent first round bye when my opponent didn’t show up. I was bummed out that he didn’t show up, and felt conflicted about registering that as a 2-0. Eventually, I finished 7-1 on rounds for 5th overall. But I’ll see that with an asterisk as that 2-0 in the first round felt unearned.

Thankfully, the rest of my 7 rounds were absolute knife-fights. Every opponent I faced provided a great gameplay experience. Almost all of my games were viciously interactive–something that I really want out of a game. (Why do you think all these removal spells are included?)

Round 2 was against a Pink Weenie deck that I was very afraid of. My deck is weak to wide, low to the ground creature decks. Pink Weenie has that, plus great removal, plus burn. Somehow, I made it out unscathed 2-0 games, 2-0 rounds.

Round 3 was against a slightly different Atog build–another deck I have issues with. My opponent, Chris Taylor, decided not to go with Ankhs and Black Vices (which really wreck me), and instead opted for Tetravuses and Triskelions. That list took him to 8th overall, but I had the right removal at the right moments, and my efficient creatures did the job. 2-0 this round for 3-0 overall.

Round 4 was against David Lance, who gifted me (and all his opponents) a CE Lance. Unfortunately, this gave me First Strike, as I took this round down 2-0 as well. However, I have to commend David for an absolutely sick build. He was on a BUG list that revolved around Nev’s Disk and Khabal Ghoul with thrulls, hippies, and hymns. I never saw a Ghoul, but my eyes lit up when he showed them to me. Beat me into a pulp, skeleton daddy. So far, 4-0.

Round 5 saw me matched against Pit Lord Grant on Naya Zoo (heretofore dubbed “Chicago Zoo”). Two decks that rely on creatures and also pack 10+ removal spells make for an incredibly fun and interactive match. We drew even after 2 games, and so we went to 3. That’s when I realized the power of my super secret tech. I was prepared for Mono Black. I was scared of Order of the Ebon Hand and its protection from white. So I was packing a trio of Psychic Purges. Losing 5 life off a Hymn is a great feeling, but that single damage from a blue card turned out to be a very useful capability. My Purges were sided in after game 1, and I proceeded to lay waste to the 1-toughness dudes on Grant’s side of the board. Grant sided in The Kang, Suleiman himself to deal with my Dibbos and Ernies. Well, come to find out… Suleiman is a 1/1. 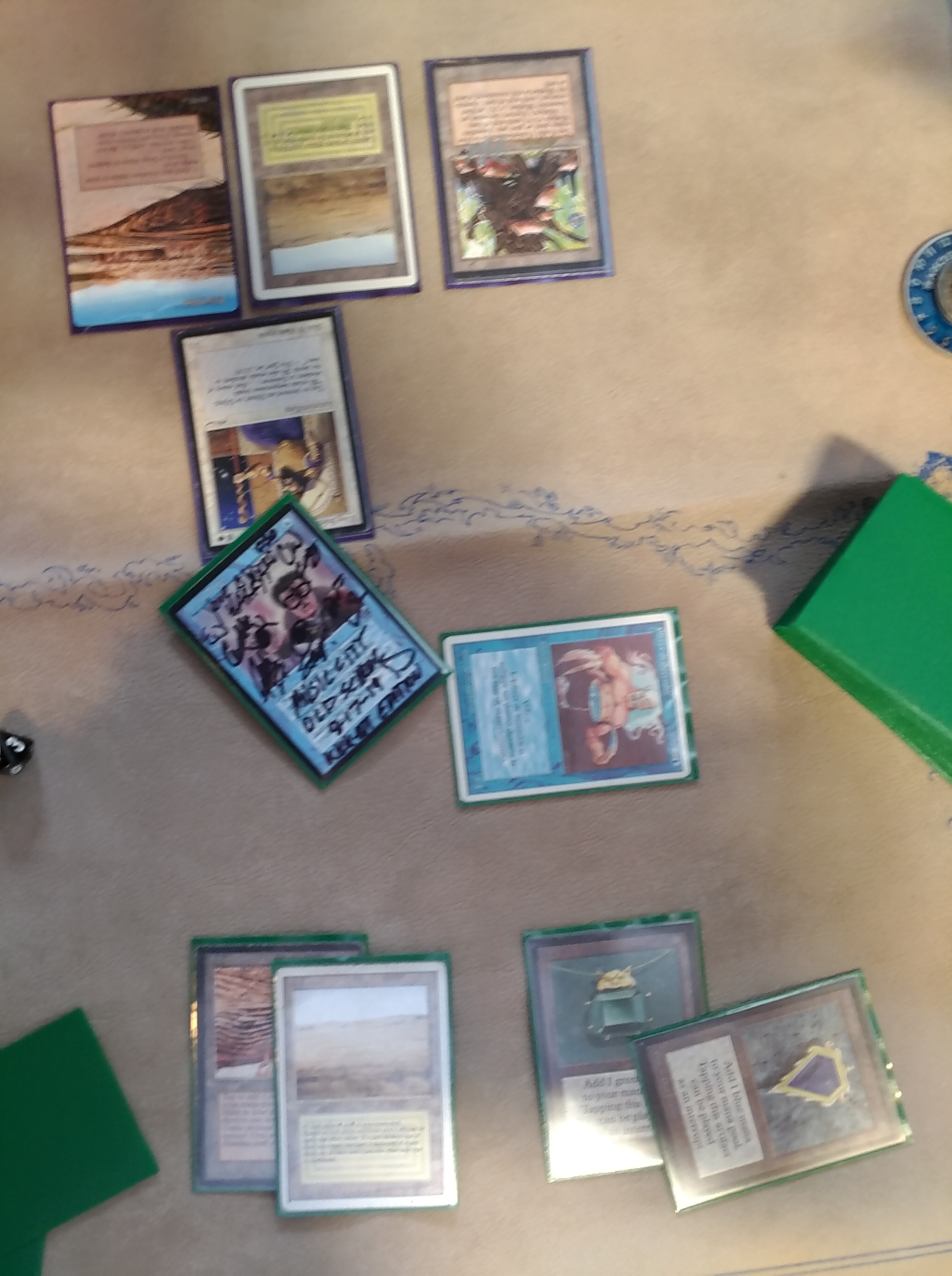 The King is dead.

Round 6 was when my fortunes changed. I was paired against Andrew McLennan, brother of Librarian of Leng Shaman Ben. Andrew was on a deck that I have secretly wanted to make work for so long–UG Berserk. A critical mass of 1/1s and other efficient critters backed up by Pendelhaven, Giant Growth, Unstable Mutation, and put over the top with Berserks is just a fun little creature-combo deck. My Psychic Purges did not take me there. I was unable to send big fatsos to the farm with Plow. Andrew bashed me over the head with Old School Infect. I drop the round 0-2, grinning like an idiot the whole way. It was an honor to lose to something so explosive. 5-1.

Round 7 was another knife fight against Jedi Bill on Hurkyl’s Fireball combo. These games were long and well fought. At any moment, Bill could go off and Fireball me for a trillion. Fortunately, this didn’t occur and I was able to eek out another 2-1 round. 6-1.

At this point, I had done better than I expected. I had wanted to go at least 5-3 on the day. A prospective 6-2 was going to be a great result that I would have been very pleased with. But now, the prospect of 7-1 was upon me and a Top 8 finish was within my grasp–something that had never occurred before. I had had fun up until that point, and I had exceeded expectations. Whatever happened next round would be gravy.

Round 8 was the moment of truth. To my pleasure, I was matched against one of the original Lords himself, Danny Friedman. He was one of the most pleasant and amiable people I have ever had the joy of playing against.  As the cards begin coming down and my creatures were Plowed and my enchantments were Disenchanted I realized something–Danny was playing The Deck. The Deck is my nemesis. I hate The Deck (mainly I hate The Abyss). But I recognize that people enjoy playing it and Danny’s was full of beautiful black border cards and he piloted it extremely well, seemingly having fun. Props to him for using the Mirror/Fireball kill, though. I liked that. Before I knew it, we had drawn even on games. I was playing against The Deck on a Game 3 that would decide who would be going to the Top 8.

This was my Boss Fight. The White Mage of the Southlands was doing battle with his Smaug.

Game 3 was a barn burner. Danny drew more cards off Tomes than I cared to count. My creatures were Plowed left and right. After a mid-game Armageddon to claw back some ground, I was out of threats and it seemed that it was only a matter of time. I looked at my library to see how much time I had left. Then, I realized something. Danny had stopped drawing off his Tomes. I glanced at HIS library… There were much fewer cards in his. Danny asked to look at his sideboard to check something. Yep. He had sided out his Timetwister. A few turns later, Danny draws his final card and says “well, let’s see how this goes.”

Over the course of the game, he had Plowed several of my creatures and I was sitting at somewhere around 36 life. He casts Lightning Bolt. Then he counts up his lands for the Fireball. The total count comes to less than 20.

The mid-game Armageddon had saved my hide. I triumph as my opponent decks himself. I finish the day 7-1, good for 5th place overall, and one hell of a day of Magic.

Unfortunately, I didn’t get many pictures in-game. I was having too much fun playing and interacting with my opponents. This post serves in part as the record of what went on and my chronicle of the time spent in Chicago. I wish that every other tourney I attend has dudes as good as I met at OSPB and that all my games will be as fun as they were there. 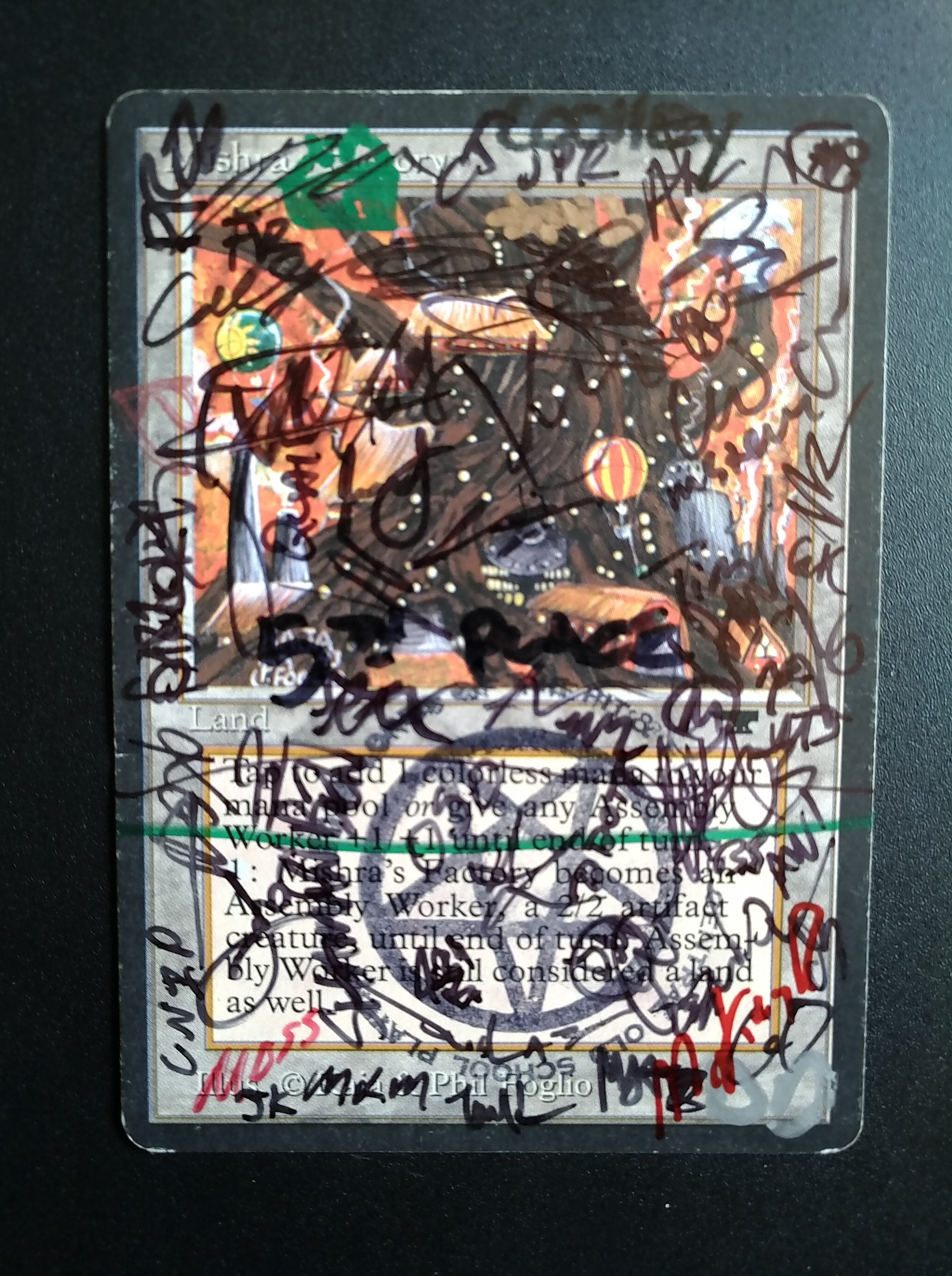 An incredible prize for 5th. It will be used in the future…

So what comes next?

I’ll keep Erhnamgeddon together and play it from time to time. I’m looking to pimp a little and get some more cards black bordered. Arabian Erhnams are in the mail, as are some CE Angels and Armageddons. It’s a great deck and a lot of fun to play, but after a big event like this, often times, tinkering occurs. Not this time. I wouldn’t change a single card in the list. It’s a very very tight list and it seems perfect for the meta. Who knows what the future holds, but this current 76 feels right. And I commend The Lion, Alan, and everyone else here in Nashville who have lent their expertise and experience with building and playing this style of deck. My success at Players Ball isn’t my own. I owe it in part to the others that helped make this happen. 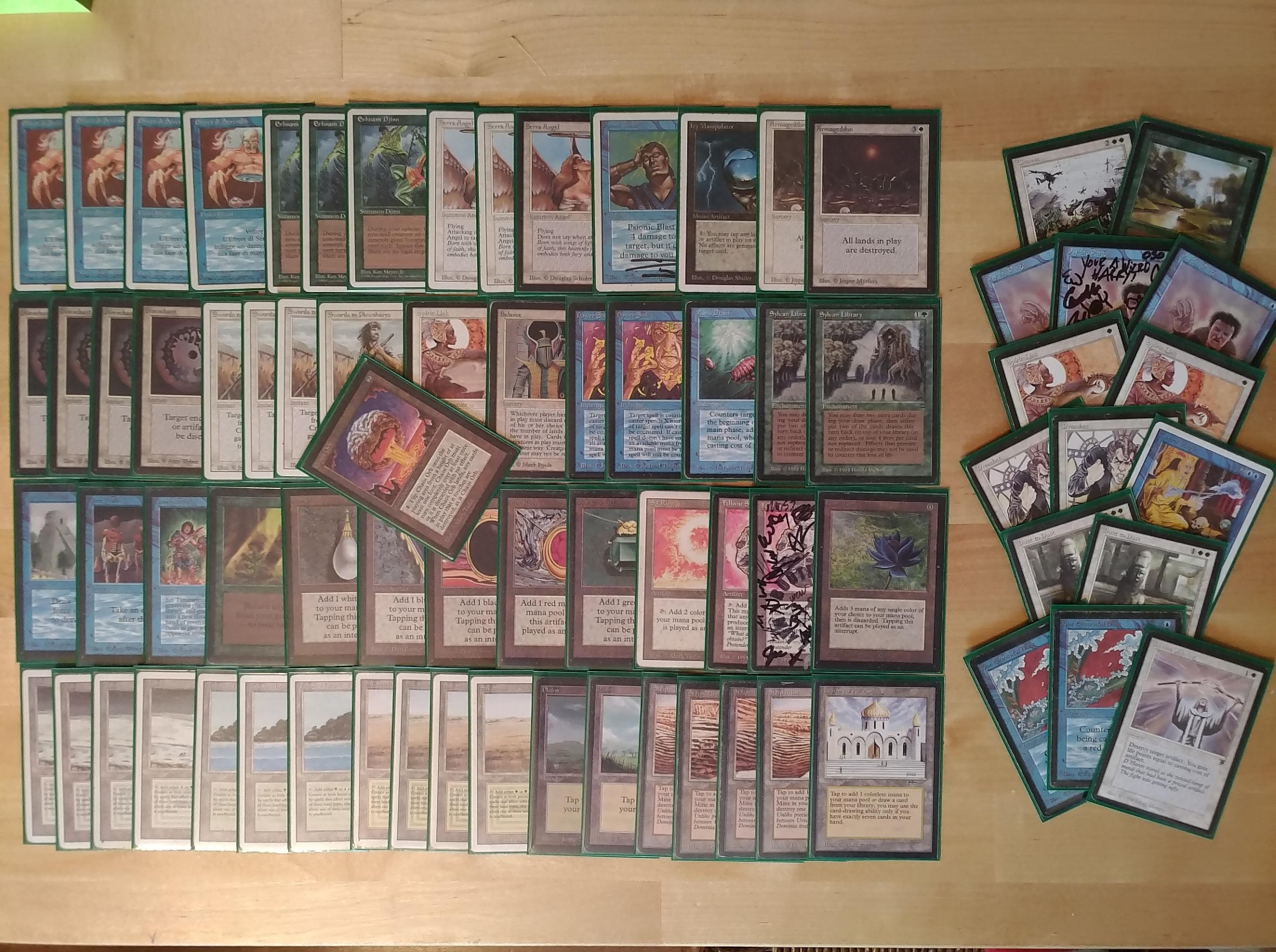 So here’s to next time. We have a Middle School event coming up, and an Alpha-Alliances format planned for our small Christmas event. Those should be fun too. After that, it’s back to 93/94. And when that comes around, I may find myself back on Arabian Aggro…