Somebody once told me you never know what you have until it’s gone. Or maybe I heard it in a country song. Either way the older I get the faster time seems to pass me by and I try to appreciate every precious moment more and more.

I had intentions to do a tournament report from the Madison Offensive, but I’ve put it off so long I don’t remember the details. I won a Beta Grizzly Bears, so definitely worth the flight, but realized I was weary of playing Mono Black. I wanted something new, something colorful. However, one does not simply change old school decks. 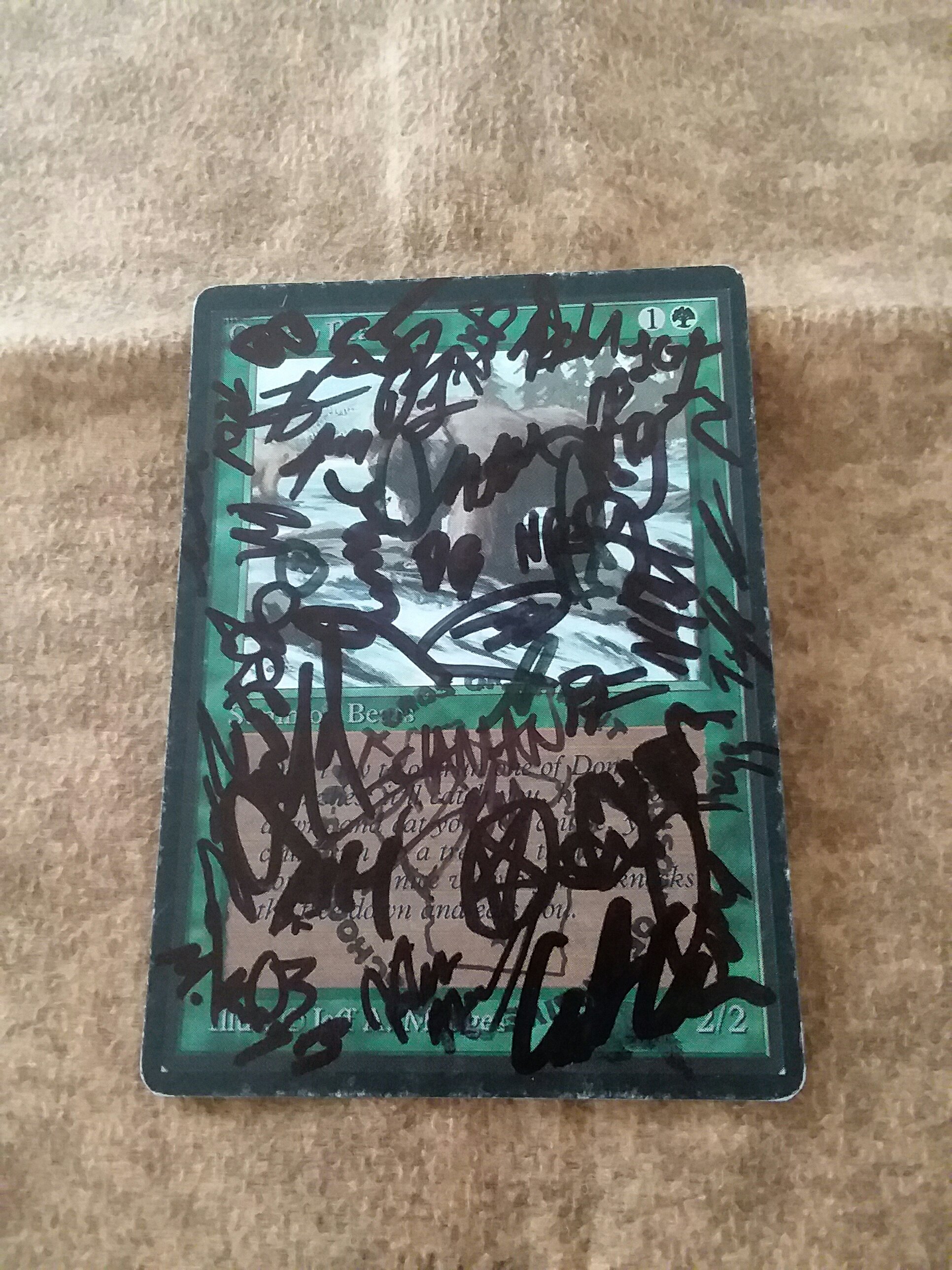 After a month of hitting buylists, trading forums, and eBay I managed to put together UWGb Erhnamgeddon. Some of the cards were Collector’s Edition, but I did get my hands on two Alpha Birds of Paradise which are one of the coolest old school cards. I barely missed my Juzams.

In March at Old School meet up I played against Zack’s The Deck, losing to a first turn Mind Twist for five in game three. And won in game three against Derek’s Goblins after getting mollywopped game one. None of that really mattered though outside of picking up a second Alpha Circle of Protection: Red, what matters is I was having fun and really liked the deck.

I made it home just in time to read to my son before getting him into bed. But getting toddlers to sleep without Venarian Gold is sometimes it’s own turn one Mind Twist for five.

He was quiet for ten minutes or so. I thought I might have a window to pull out my deck and return it card by card and in ascending order by mana cost to the safety of a binder when I heard the door creep open and the pitter-patter of little feet on hard wood floors. With blanket and stuffed dog in hand he came around the corner, wide-eyed at the contents of a 25 year old Shivan Dragon backpack spread out on the coffee table.

Now I don’t get mad at the boy for being curious. He just wants to hang out. He wants to get into whatever Papa is into. At two years old my son helps me change the oil in my truck and hauls brush with me in a little wheelbarrow.

“Sure buddy, we can look for 5 minutes then we have to go back to bed”.

He gets the biggest smile and his eyes light up as he climbs up on the couch beside Papa. I pull out my trade binder which really doesn’t have much in it. We flip through the first few pages til we get to the red cards, and excitedly his little finger points to the page.

I laugh. He then points out another card.

Seems like an odd word to know for someone with a small vocabulary but down here sippin sweet tea in a rocking chair on the porch and watchin the storms roll in sounds like a good evening. 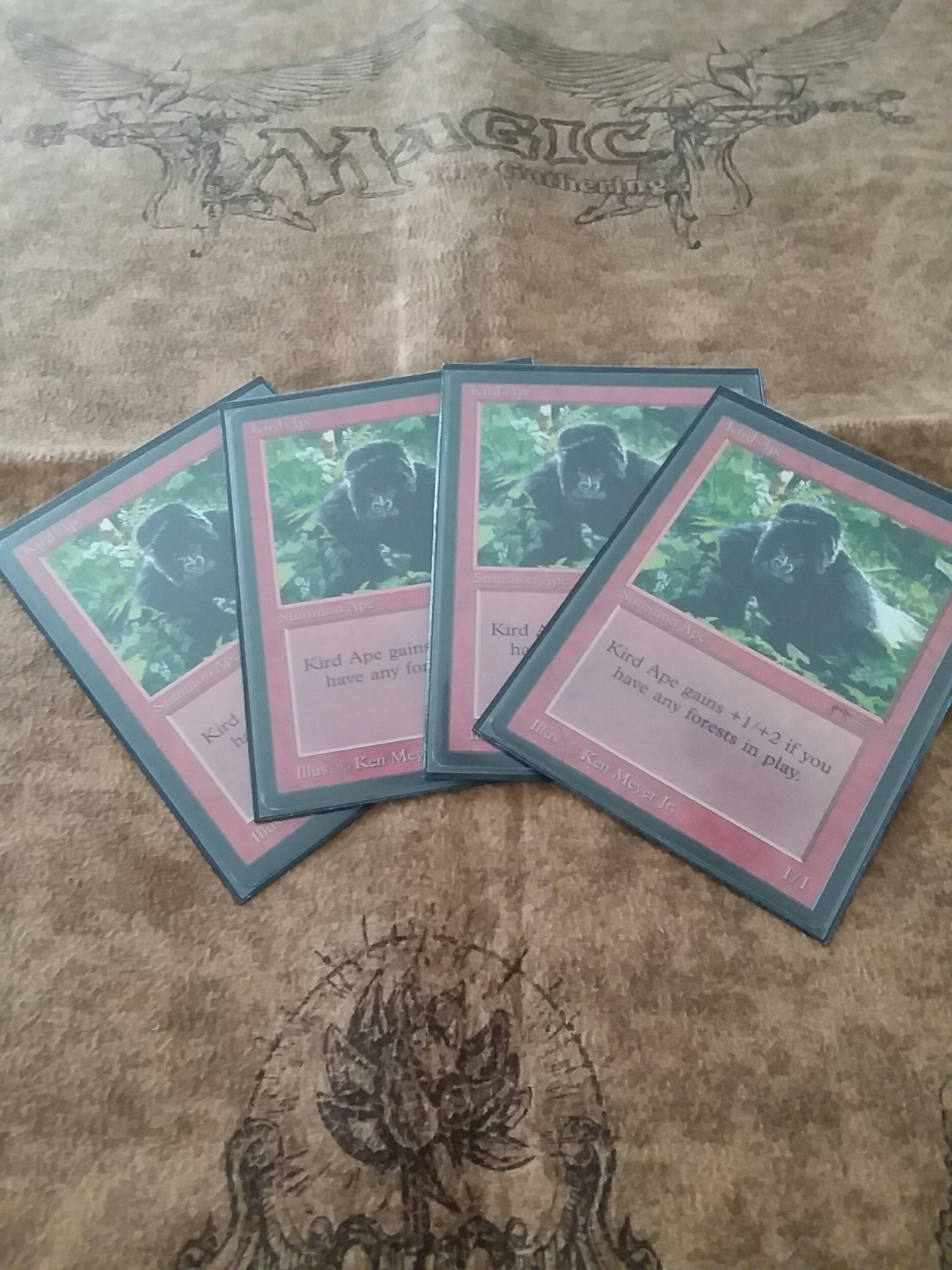 We finish flipping through the last few pages and I note the glaring void where all my black cards used to be. I get him back in bed and he’s out like a light, content to have spent a few more minutes with Papa.

So the boy likes his Monkeys and Lightning Bolts. Guess I know what deck to build him. I’ve had it in mind to build him a deck for a while because I figure down the road if he’s interested in playing it’ll likely be too expensive to acquire a second deck. Hopefully he’ll want to play some Old School with Papa one day but if not, that’s ok. RUG Zoo is a hell of a deck.

So soon after I acquired playsets of Serendib Efreet and Erhnam Djinn I moved them out of my Erhnamgeddon and into a new space in my binder, a space for my son and his Monkeys and Lightning Bolts.

I was left with a pile of Swords, Disenchants, and Counterspells, not to mention a good chunk of the restricted list. What to build for Papa? I think you already know.