It had been a long hiatus, but in mid-2017 I finally fell off the wagon.

I started playing Magic back in the halcyon days of high school. My friends and I in 2002 decided that to get the fullest experience, we’d play what was known as Type 1. All the sets were legal, there was a banned and restricted list, and we could do whatever we wanted. We wanted to do the coolest things possible, so we netdecked and homebrewed and bodged together cheap crap. We drafted Odyssey and Onslaught. We all had our pet decks. Stasis/Kismet, Prosperous Bloom, Oath of Druids. I landed on Trix. I thought it was such a cool combo. (Can you tell it was the early 2000s? Aggro was out. Combo was in.)

Games didn’t last long back then.

After graduating and landing at college, I tried to take my obsession with me. But as the workload increased and the amount of money I had went the other way, I decided to lay off Magic. And so my cards and decks got buried in their carrying case at the back of a closet. After college, I got a job and forgot about them. The game seemed to always carry a social stigma for me, for some reason. Maybe it was the latent self-consciousness about being a nerd. Maybe it was “card games are for kids.” But then one day, I decided all of that was bullshit. Kids don’t drop thousands of dollars cardboard. I’m a grown-ass man. I’ll do what I want. And by God, Rush is COOL now. I’m finally vindicated in my fandom.

So the cards came back out. I researched what had changed and what I needed to do to get back into the game. It looked like Legacy was where I was going to fit best. Delver of Secrets looked cool. A 3/2 flier for one blue mana was just obscene, so clearly I’m going to play that. And I had playsets of Force of Wills and Volcanic Islands from my Trix days. (Aside: I regret not buying Underground Seas in 2004. I hated the idea of paying $50 per land. Now a playset will make two mortgage payments for me. Hindsight sucks.)

Over the course of a few months, I had put together a few Legacy decks and tweaked older ones to fit the format. But it seemed like something was missing. Things were… complicated. I enjoyed playing again and building decks. But that pesky Delver of Secrets was a portent of the rest of the metagame. Power creep is real. The Phyrexian Negators from my Suicide Black deck were worthless now. Phyrexian Obliterator takes the concept and ruins what was a balanced card (for Urza’s Destiny) by eliminating the drawback. Tarmogoyf is insane. Storm is even worse. Death and Taxes? Prison decks should not be mono-white. Five. Color. Leovold. Humans. And the cost of making a deck that was even halfway competitive was almost prohibitive. The flavor seemed different too. Artwork just wasn’t as distinct. The new artists, while talented, just aren’t as eye-catching as Phil Foglio, Harold McNeill, Ron Spencer, Rob Alexander, John Avon, Drew Tucker, or Rebecca Guay. 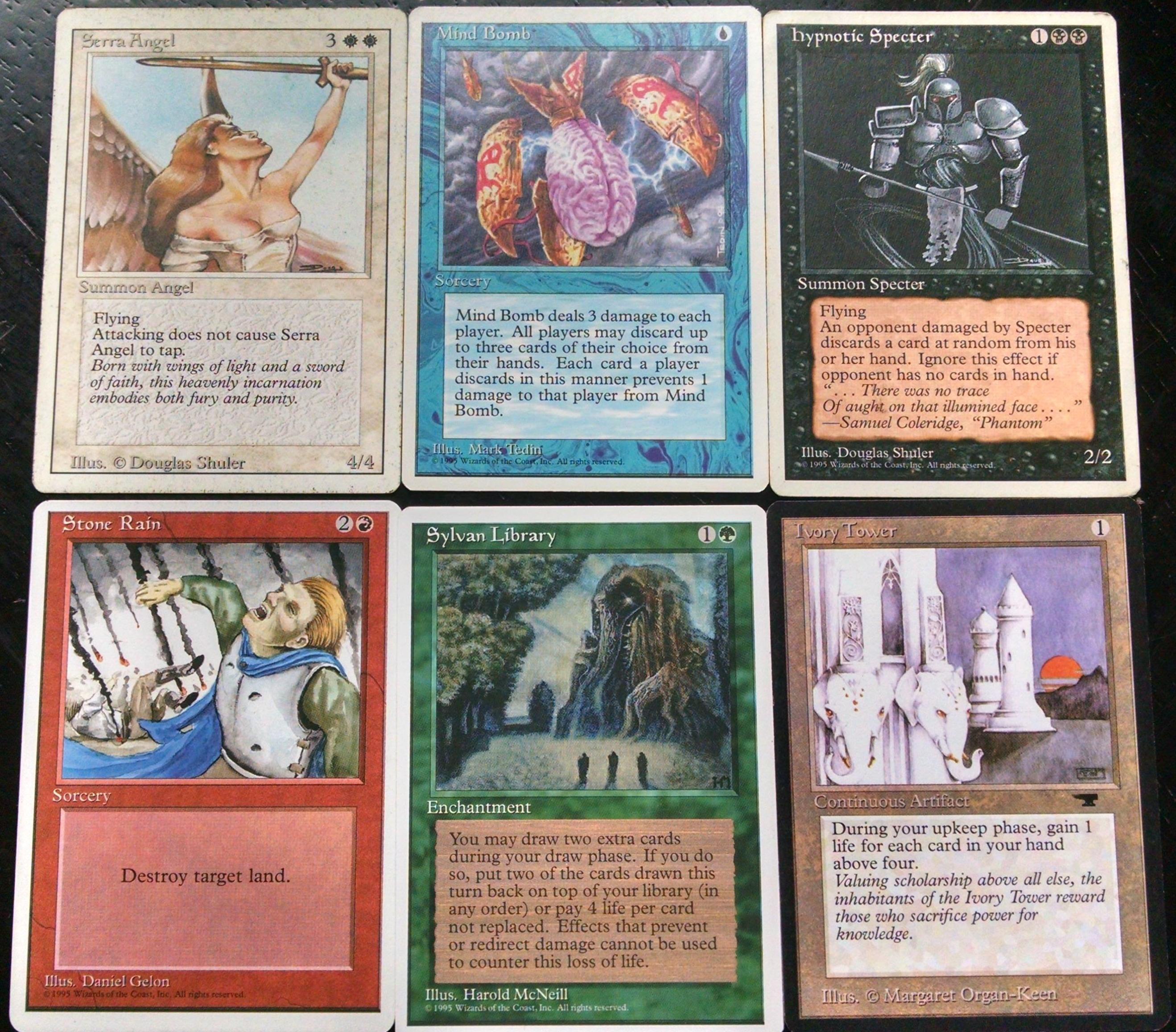 Sometimes you wonder what the prompt from the design team was. “Mind Bomb – take it as literally as you want.”

I came to the realization that, while the game was still fun and I was enjoying getting back into it, things just weren’t the same. The feeling was different. Planeswalkers were throwing me off. The overall atmosphere of Legacy was just too serious. Nostalgia had crept in and whispered to me “remember what it used to be like?”

But in late summer, I discovered something called Old School. The nostalgia that had driven me back into Magic now had a chance to be fed. When I started playing in high school my friends and I would frequent a couple of card shops. There, they had massive boxes on the countertops full of commons and uncommons from Fourth Edition, Revised, Mirage, Homelands, and all of the older sets. I spent countless hours standing at the counter sifting through these cards and flipping through the Rare binders. Looking at Old School decklists brought back fond memories, because I remembered all the cards! Serra Angel, Sengir Vampire, Clone, Ball Lightnings–all the marquee fatties were suddenly playable again. Giant Growth and Crusade and Blood Moon were powerhouses. It looked HARD to make a combo deck.

Soon after discovering Old School, my focus on Magic shifted. Rather than order powerhouse Legacy staples online, I found myself spending hours at a local hobby store just like in the old days sifting through white border cards from Revised and Fourth Edition. But spending two hours hunched over card boxes as a 30 year old is very different from doing it as a 17 year old, as my aching back can attest. Nevertheless, my persistence was rewarded. I wound up with the bulk of four different decks for an Old School group I got connected with. And I even pulled these from the commons box.

Both of these were found in a 5 cent box at a local hobby store. The Ent is in a hardshell case now. The Force was sold to fund the completion of three decks.

Turns out, when you buy cards in bulk for a nickel apiece, they don’t count them individually. Which is how I paid a dime for eighty bucks worth of cards. I sold the Force of Will to finish the rest of my Old School decks. I kept the Gaea’s Avenger. Why? Because like I said above, the artwork popped. It’s a massive Treefolk holding a sword and pointing at an unseen enemy. That’s just cool. And it’s not in very good condition either. Cards that are beat to hell just seem better. They have character. They’re well worn because they’ve been played.

And that’s what all of this is about. I returned to Magic so I can relive what was fun about playing in the old days: Building a pet deck or two. Brewing something cheap and wonky. Getting together regularly and just playing games.

For the foreseeable future, that’s the plan. Now that I’m a part of this Nashville Old School group, I intend to tune a few decks into machines. Expect to see articles on my experiences with White Weenie, Black Aggro/Tempo, and Red/Green Zoo in the future. In the meantime, however, I’m going to feed the addiction and just play the game.

White Weenie, in development. Sideboard needs work. Rule of Cool still in effect for Army of Allah and Clergy of the Holy Nimbus. More playtesting may mean their inclusion could be in doubt… Stay tuned.