The above header picture is the most old school picture of Nashville, TN I could find (circa 1860). I moved here a year and a half ago with my family to start a job and not long after, got back into Magic after not playing since I was a kid. I started by building a standard deck, since that seemed to be the most popular format and I thought I’d be able to play with more people that way. It was fun for a bit, but the more I researched the 16 years of magic that I missed out on, the more I disliked it. I thought planeswalkers were lame and I fucking hated eldrazi. Long story somewhat shorter-I eventually stumbled on a tournament report for an Eternal Weekend old school event. I gawked at the decks for a very long time. I remembered all the cards. Most of them anyway. I dismissed the whole thing fairly quickly though, as I thought there would be no way I’d be able to afford the cards, but I kept coming back to that tournament report. I eventually did some research on the format and after a few weeks, I decided to bite the bullet. I didn’t give a shit if it took me a year, I would build an old school deck. I figured I’d probably never find anyone to play with, so at best, I could at least piss off my friends who were playing modern and standard. I sold the cards I had and decided to buy 4 Mishra’s Factory to get me started, one of each season.

I’ve since been able to build 3 decks with a bit of bartering and scraping. I also managed to find 4 like minded fellows. Our gang meets monthly, trading meetings between a local game store and a low key coffee shop/bodega. I’ve had a blast playing old school. The art and nostalgia are what hooked me initially. I remember the first pack of cards I bought. Fallen Empires. The only card I remember specifically in that pack was Night Soil. I recall being so intrigued by them and not sure why. Even before I knew how to play I loved the cards. I guess it was the art and general aesthetic, but it was the first sort of “other worldly” thing I had really experienced or been into. I never read comics or had been into star wars or anything. Because of that, I think it was like an automatic escape from reality, which on occasion is completely necessary. With the old cards, I get that feeling every time I look at them.

Anyway, this is our blog. The point is to try and connect with other old school groups out there and to have somewhere for us to come ramble. I don’t think I’ll post too often. I’ve never really liked being very present on the internet (other than my anonymous Facebook account for old school Skype games). Although, we have 4 other members that will add to the site to try and keep it interesting. Pics of our meet ups, occasional deck techs, and other ramblings to come. I’ll leave you with a couple shots from our last meet. 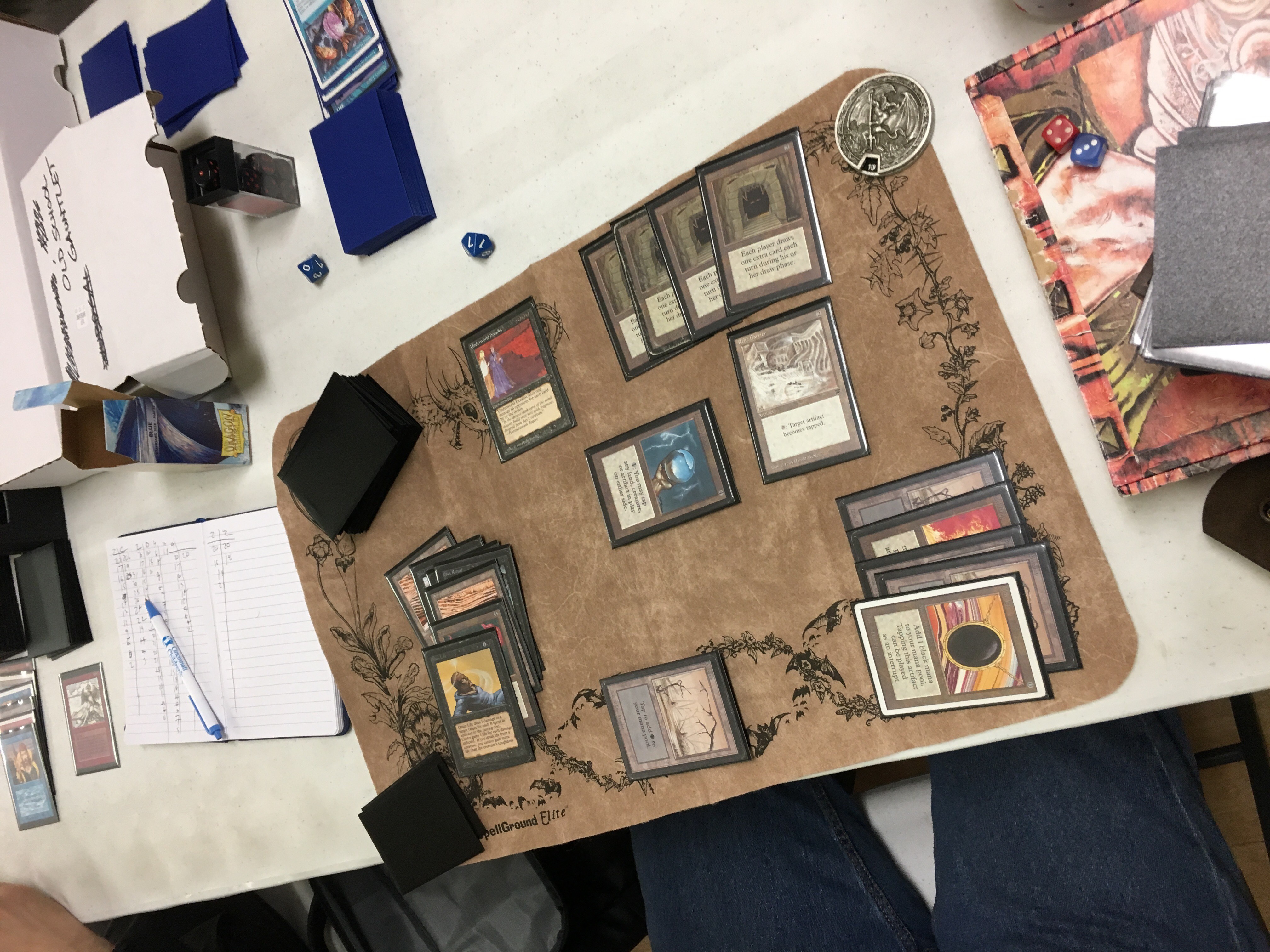 Brendon doing some work on the new guy, Cayce. 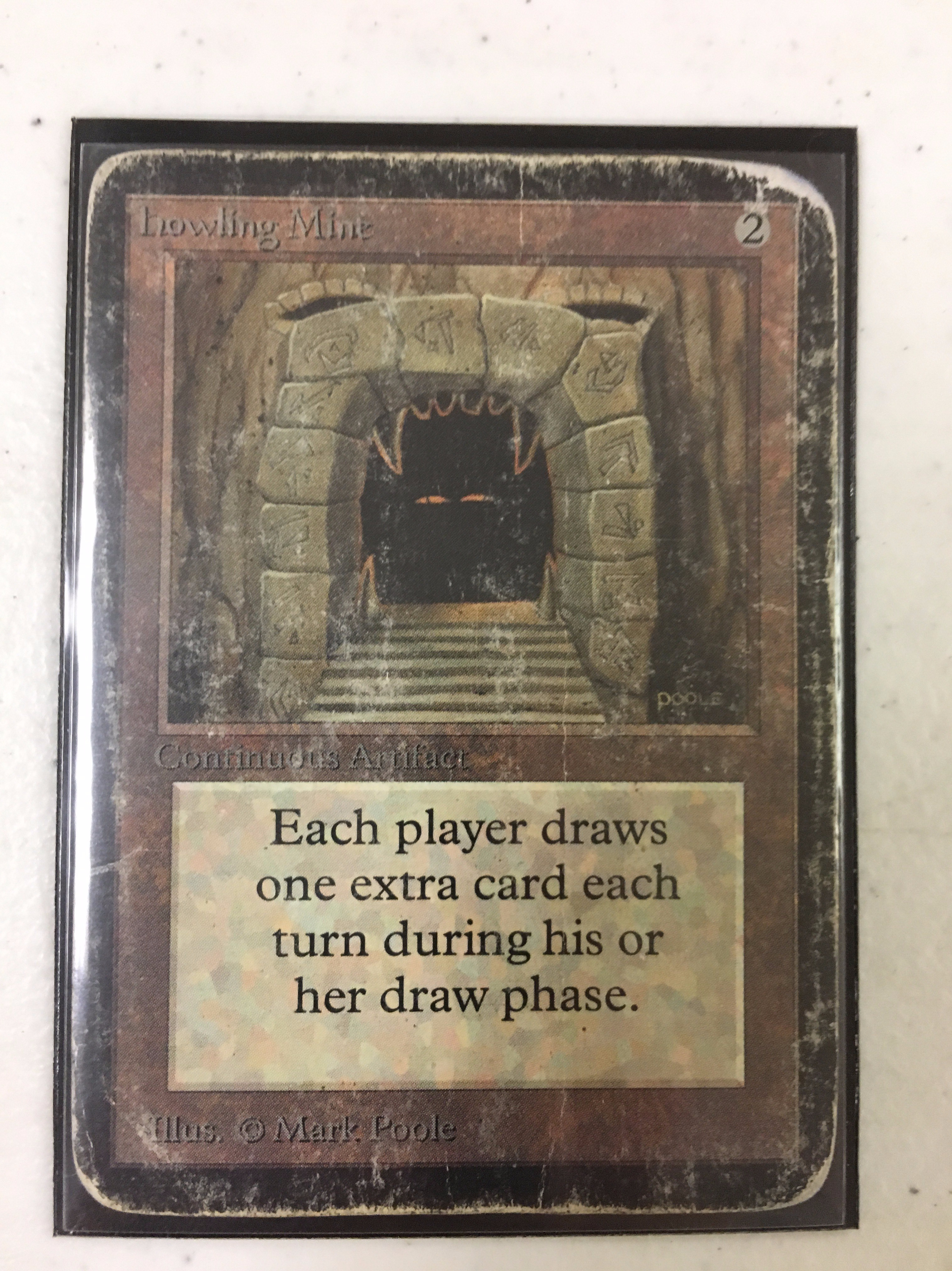 Brendon’s near mint Alpha Howling Mine. 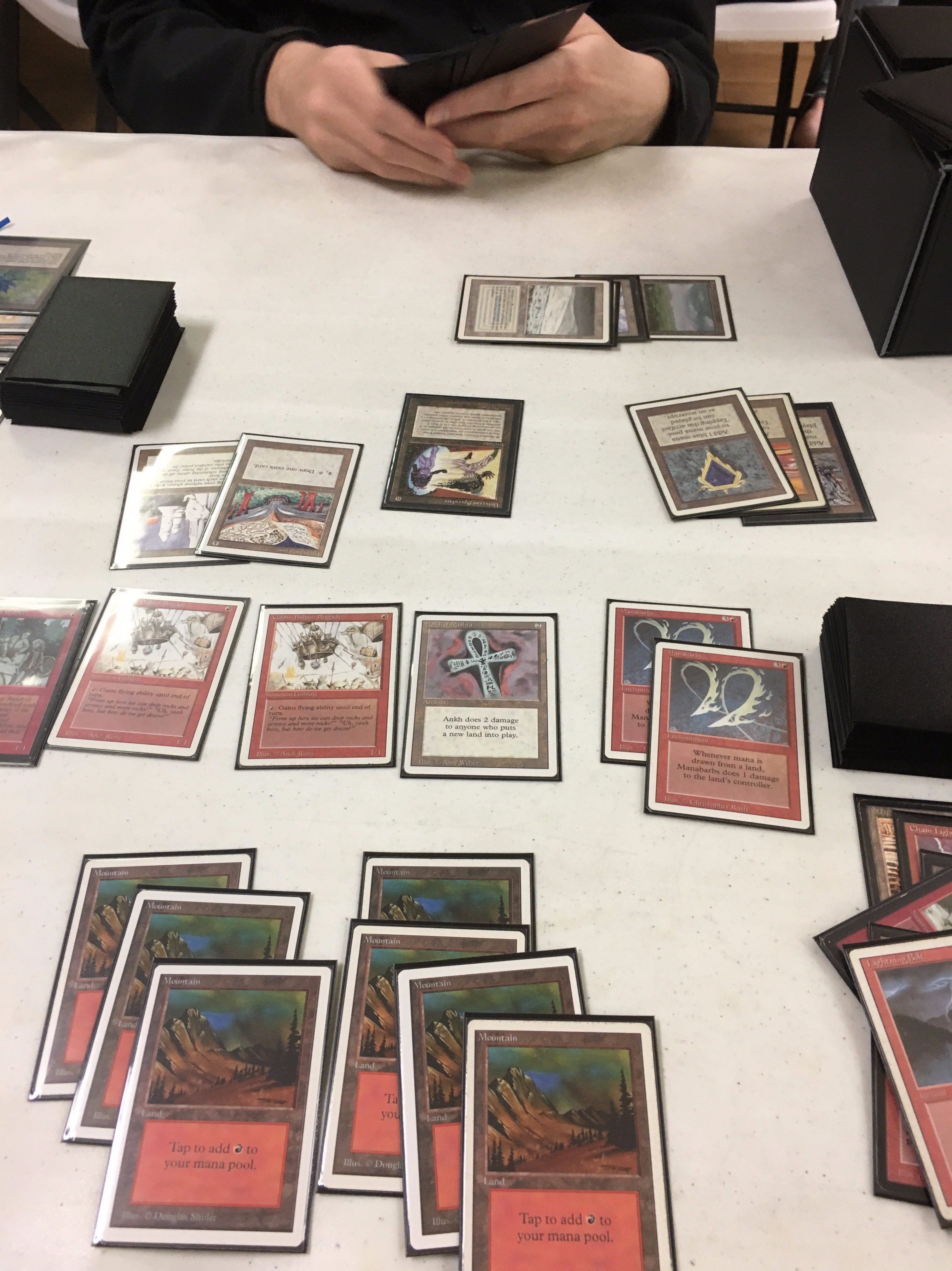 Post board against Zack, who was playing The Deck. After it was too late, he pointed out that I could have tapped out in response to him activating the mirror, sinking my mana into the balloon brigade, taking 14 from the flares, and rendering his mirror pretty useless. Oh well.