It’s about 10:30 and I’m watching n00bCOM in 2-3 minute intervals while drinking lukewarm coffee and trying to finish up some work before I say fuck Friday. Meanwhile, my two kids are swimming around with ferocious amounts of energy. I’ve just finished tutoring my daughter as she is out of school for the rest of the year and she is now ready to rage. However, my son has been raging for quite some time and will probably continue on his war path until I get them both outside to run around and blow off some steam. I’m not complaining, I’ve felt very lucky and grateful over the last few weeks for a lot of reasons and I’ve enjoyed the extra time with my family. This is just how it’s been and I’ve gotten mostly used to it, but just the same, some days are more stressful than others. Luckily the weather is nice today. Outside we go for driveway hockey.

Like many other Old School tournaments this year, Bootleggers Ball 3 will be canceled/postponed. I don’t want to get ahead of myself so I won’t throw out a specific date yet, but I’m going to play it by ear and hope to re-schedule for some time in the fall. We’ll see. Until then, I’ll be refunding everyone over the next week, so be on the lookout for that. Regardless, it will happen and we’ll make sure everyone that was signed up gets first dibs. I hope everyone can make it out to hang hard and battle for this years’ Jesper Myrfors altered Titania’s Song. Check it. 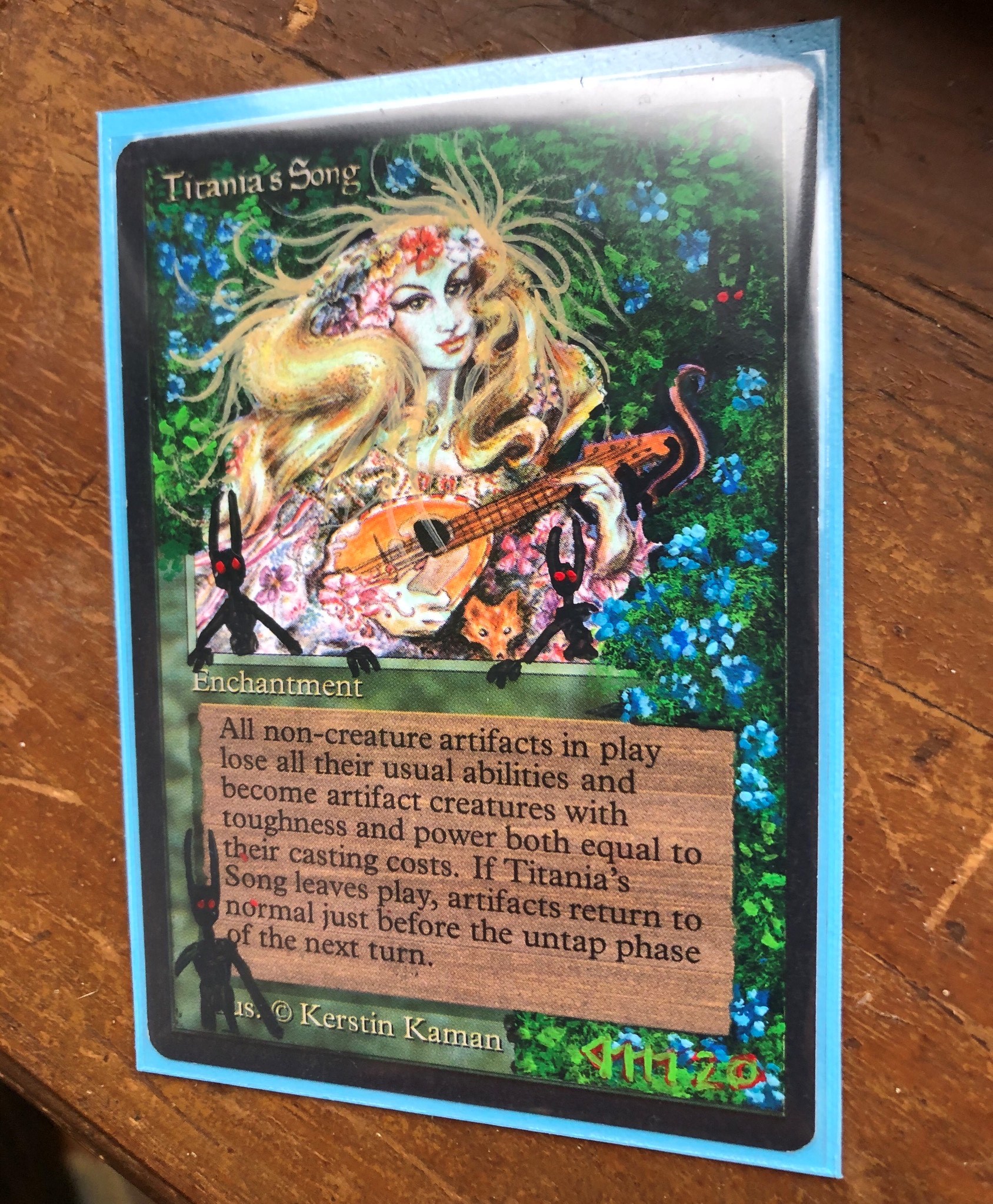 Thank you Jesper and Spoofs.

Not surprisingly, online play has picked up quite a bit over the last few weeks and being stuck at home, I’ve been brewing here and there and playing cam jams when I have time. I brewed up a fun Blue deck just to get use out my Phantasmal Terrains and DanDans sitting in my binder. I’ve also wanted a set of Unlimited Lord of Atlantis’ so that was an excuse to nab some of those. I’ve recently played in a few online tournaments and have had the chance to play with some rule sets I haven’t had the chance to, one of which was SWE+Scryings. I was really pumped during the spoiler season for Scryings and then for whatever reason I never got around to building anything when it was fully revealed. Since I’m here and it’s been a while, I’ll rant a little about my Scryings Stompy build. 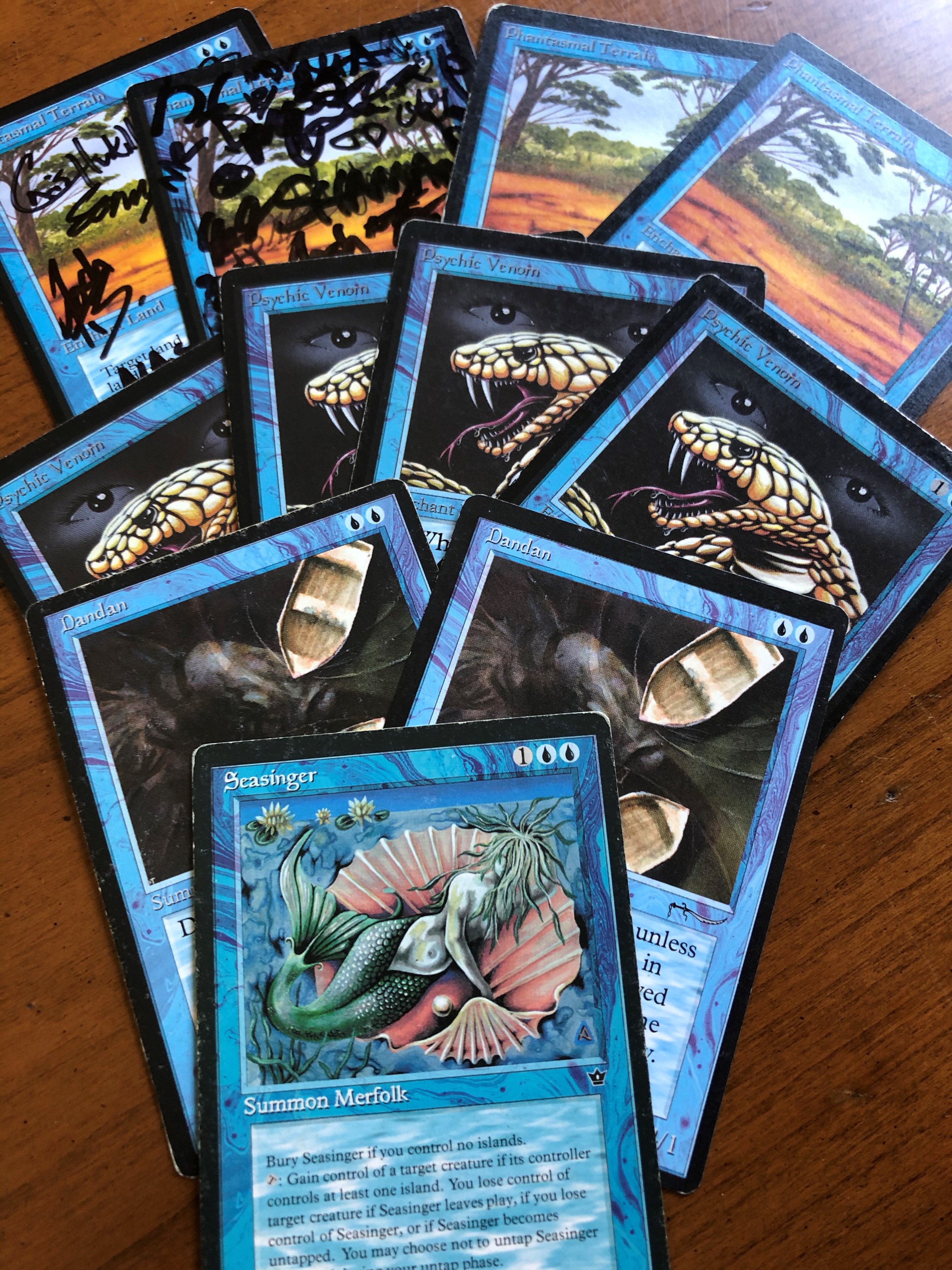 I played a small round robin Scryings tournament and wanted to play a mono B Pox deck, but I got stuck on brewing it, so I did what I usually do and took a stroll in the forest. I very quickly updated my EC Stompy deck the night before the start date with some very good additions from Scryings and took out 3 Strip Mines. I ended up here. 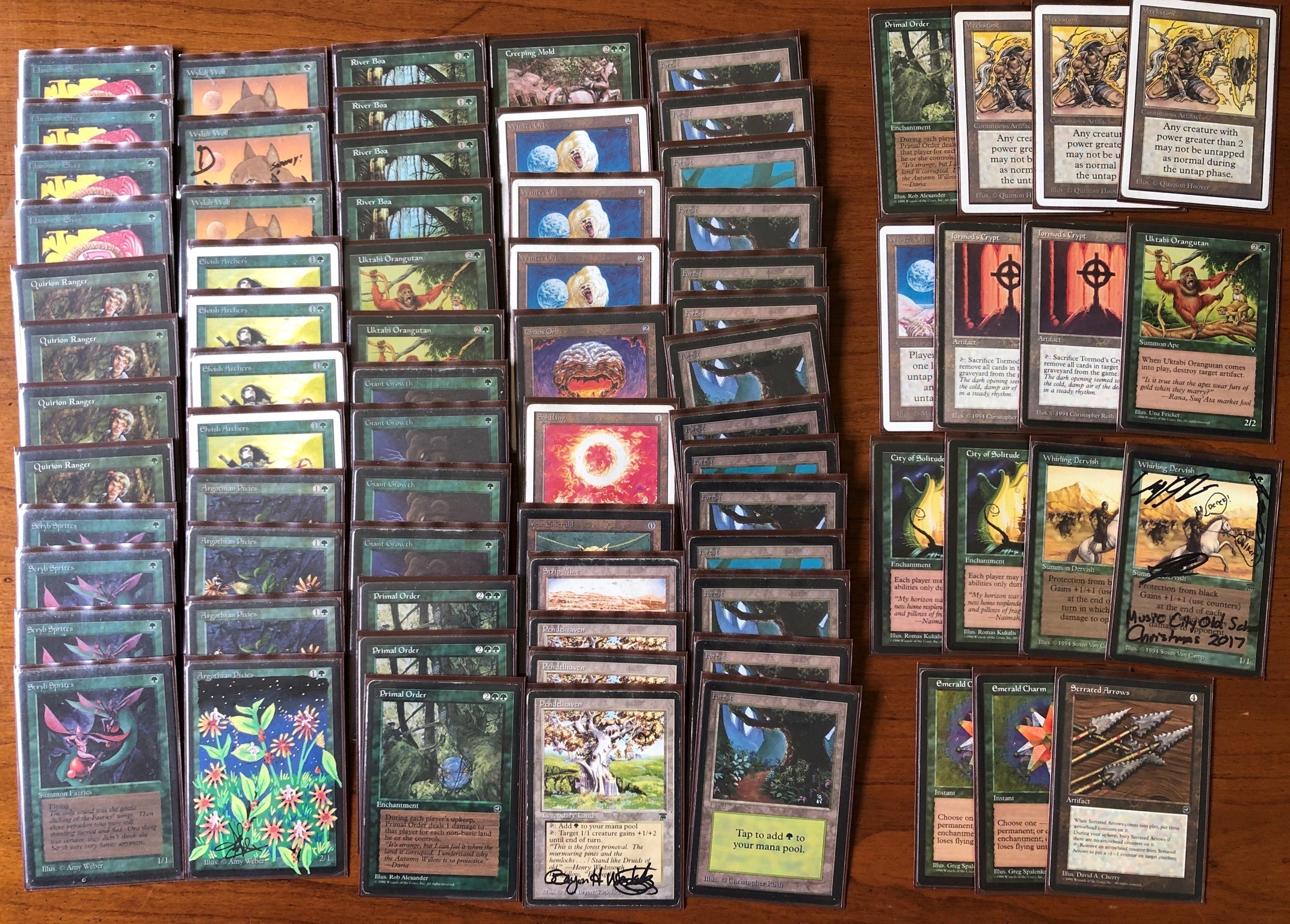 I think the deck is great, although I finished pretty bad at 2-4. I blame that on the sideboard, my playing, and throwing it together without testing it. It’s pretty similar to my EC build, but it has some fresh bangers. The first card I added was Primal Order. Expectedly, it did work. Not one of my opponents was on a deck that played less than 3 colors, so their dual lands ate them alive. Primal Order is a 4cc card, which is a cost I stayed below in the EC build of this deck, but without the worry of 4 strips and the ability to make a lot of mana with very little due to Quirion Ranger’s ability, I figured 4 mana would not be hard to come up with. Speaking of Quirion Ranger, it is my favorite addition to the deck. Aside from helping make a ton of mana with very little resources, it also works well with combat tricks; notably un-tapping creatures to block and pumping dudes twice with Wyluli Wolves. There were times when I was able to get in for 4 with an island walking boa. 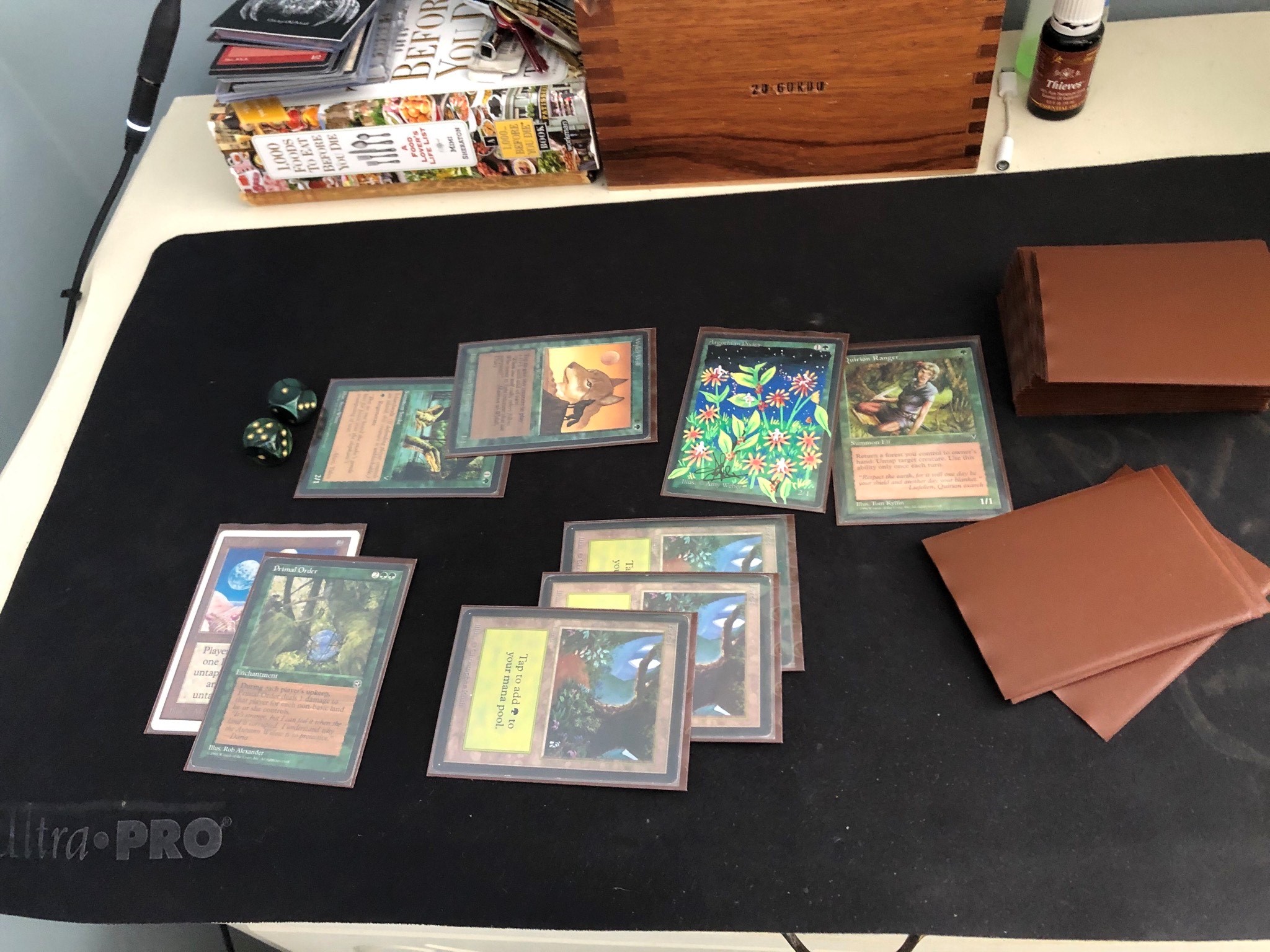 Here I’m using Quirion Ranger to cast Primal Order with only 3 Forests and to pump the River Boa twice with Wyluli Wolves. Bitchin’.

Next is Uktabu Orangutan. Not much to explain, except for the sensual artwork. It’s a great creature that gets artifacts gone. I also threw in a single Creeping Mold. This card is super versatile and I thought 1 in the main would be a good life saver. I’m not sold on it, but so far so good.

For the main deck I’d like to bring back Timber Wolves, which are present in the EC build. Combat tricks just get trickier with Quirion Rangers, so they may be a good addition as a 2 or 3 of. I also think adding the 4th Wyluli Wolves is probably a good idea. Not sure what else is in store for the maindeck yet.

I think the sideboard is where I went wrong. I don’t like City of Solitude there as it turns off regeneration in my opponents’ turn, which I need for boas and I’m not really sure how it would aid me at all. I think it’s a better card for combo decks so that they’re able to do what they do un-hindered. Or something. Tormod’s Crypt probably needs to stay for Reanimator, which is pretty busted in Scryings. I think I like the Serrated Arrows, although I never brought it in, but probably should have multiple times. I’ll more than likely add a second and test that. I think the Emerald Charms are good, but I don’t know what the right number is. So anyway, those are my immediate thoughts. I’ll stir it around and run it back when I get the chance.

I also recently sleeved up that mono U deck I mentioned earlier. I don’t usually play blue, but I had bits and pieces laying around for a U-bru, so I figured I’d give it a shot. I thought going all in on playsets of Psychic Venom and Phantasmal Terrain along with 4 Strip could put a good hurtin’ on the opponent’s mana base while taking advantage of islandwalking merfolk, a couple DanDan, and a Seasinger backed up by the unavoidable ‘Dib. After a handful of games, I definitely think the Psychic Venoms should be Flying Men. I could also probably drop the single Magical Hack, a Counterspell, 1-2 Boomerang, and one or both PowerSinks for some number of Psi-Blasts and River Merfolk which would give it some more aggression. Nothing super creative, but it’s fun to play a color I haven’t really dove into yet. I’ve actually seen a lot of these mono U decks doing fairly well, which is refreshing. No deck pic yet, but I’ll tinker with it and blast out a post on it sometime in the near future. 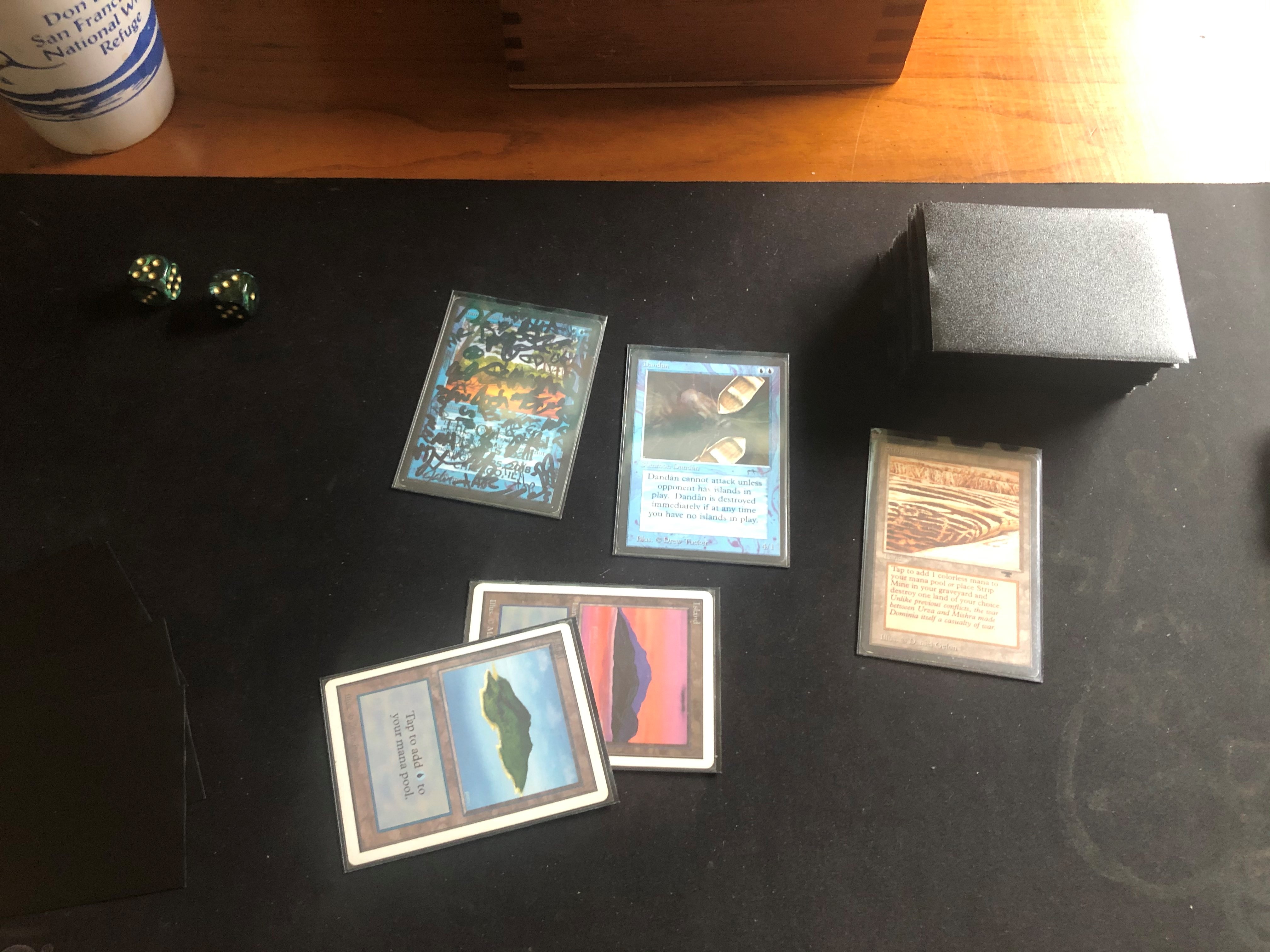 That’s it. Peep the music suggestion and card below. Drink your quarantine. Stay sane. Go outside. 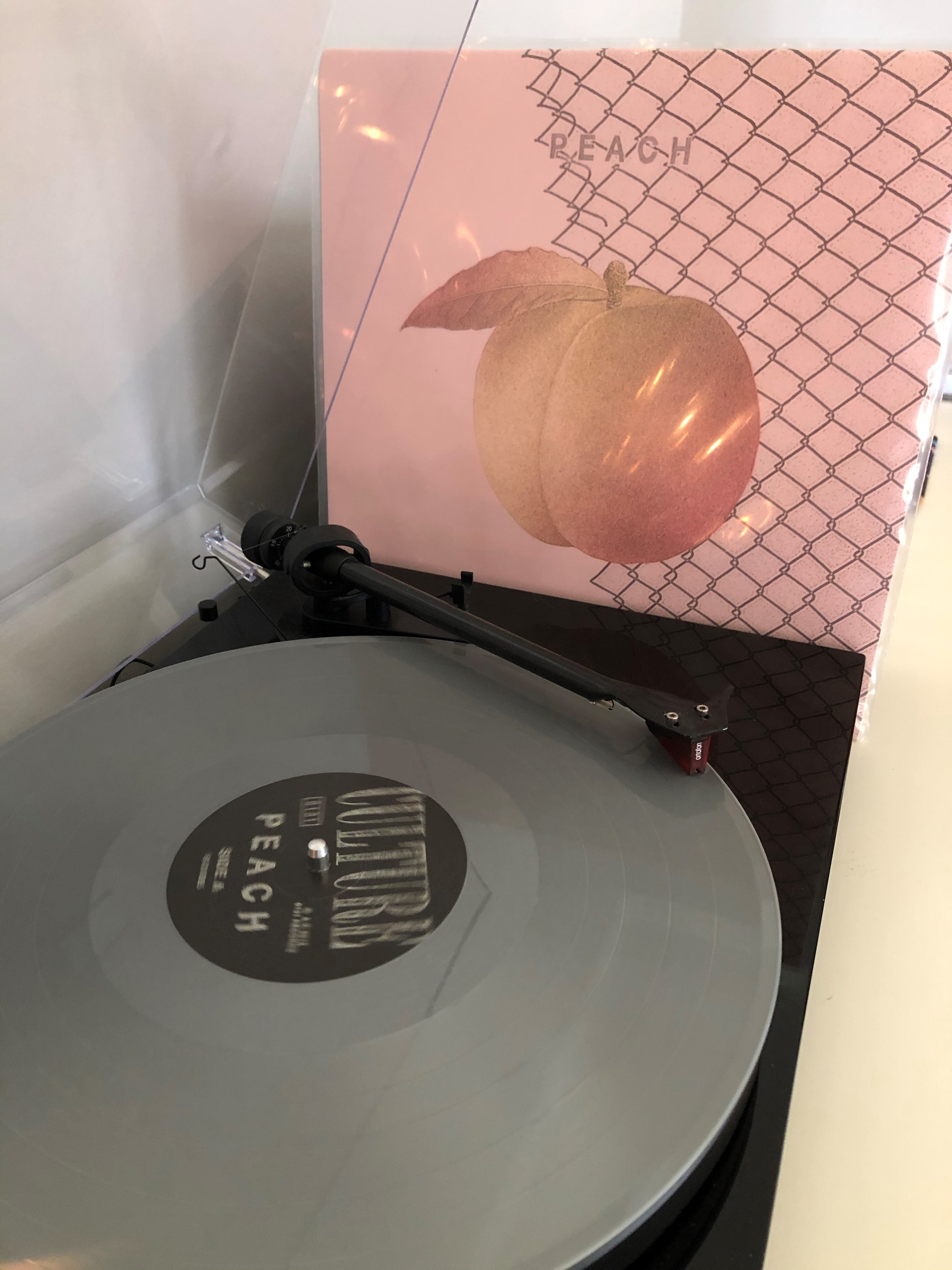 One of my favorite things about music is when it encompasses two conflicting sounds in being aggressive and heavy, while at the same time being catchy and melodic. There are a lot of bands and artists that do this and sometimes they will lean more one way than the other, but Culture Abuse do a great job at keeping their sound very balanced.  For some reason, I have a hard time describing this band. At the time of writing this I’m listening to their record and I stopped to think and just listened. I hear hardcore, distorted vocalss, good ol rock and roll, harmonica?!, big ass catchy riffs, and a ton of good things just meshing super well and tastefully together. Their album, Peach, is killer front to back. I’ll leave you with the first song that stuck out to me when I first heard the record, Dream On. I also highly, highly suggest taking a listen to the closing track, Heavy Love. Hell, just listen to the whole record. Blast it.

I like how blue can be under the radar aggressive. Aggro is not something you usually think of when you talk about blue cards, but there a lot of great options in the color for a fast aggro deck. I’ve always really liked Unstable Mutation. My favorite card is Giant Growth, so this is kind of the blue version. Like many of the cards I talk about here, it’s not great. But, roll the dice. Pop a couple on some Flying Men and ride that shit until it burns up.