I woke up a few mornings ago around 6 A.M. I lay in bed completely still until I hear the coffee maker kick on, which is my cue to start moving. This past year I’ve been renovating a 100 year old home and trying to play catch up on a career that I started way later in life than I should have. The grind lately has been…especially grindy. Before the sweet morning nectar even started to drip, I heard my phone buzz. I grabbed it to see a work related text, but also noticed I had another message with a picture attached. This one much more intriguing. I checked it and stared at the screen for at least a good 5 minutes. I had been periodically messaging Tom Wanerstrand about the Titania’s Song alter he was working on for Bootleggers Ball for the past few months, which I explained a couple of posts ago. I was trying my best not to bother him and to contain my excitement and in the middle of the night he had finally delivered a picture of the most beautiful magic card I’ve ever seen. 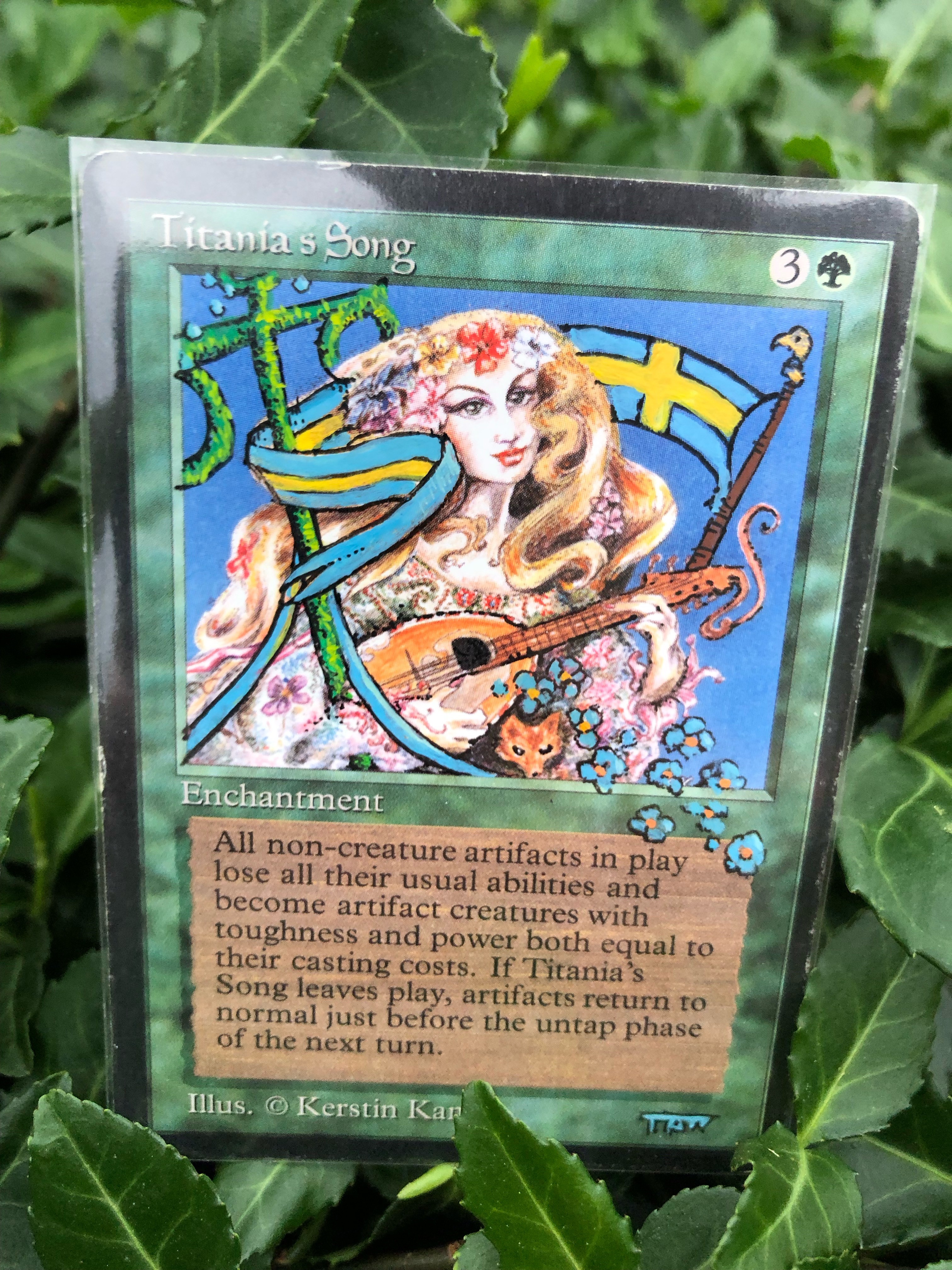 This card is not only beautiful because of the stunning artwork, but because of the sentiment behind it. Tom was extremely kind to do this for us, but I think this was really for his mom, Kerstin. I sat up in bed and felt a surge of emotion. My mother has not been well, so this may have compounded those feelings. Before I did anything, I texted her a picture of the card. I got out of bed in a daze and within 10 minutes I was in my car with a giant cup of coffee, matted hair, and still sort of struck. Crazy to think a Magic card could spark such emotion. What you’re seeing is Titania wrapped in a Swedish flag holding a Maypole at Midsummer (Tom’s family is Swedish and Midsummer is a celebrated Swedish tradition that includes decorating a Maypole). The blue flowers spilling out as she plays were Kerstin’s favorite.

We adopted Titania as our Music City den mother a while back. In the beginning, we just thought the art was great as well as fitting for our group. But, for whatever reason, we started digging on all the information we could find about the card. The artist-Kerstin Kaman, where she may have gotten the inspiration, how that real life inspiration tied into the game, etc. We went deep. Really as just a fun thing to do, but it turned into more than that. Jesper Myrfors eventually put me in touch with Tom and I can’t believe we landed here with this masterpiece. It’s nice to have this card, even if for only a short time. It’s all I could to do to come up with these few words to present this piece of art. There’s no way I could even begin to chip away at the story of Titania. So, I’ll do you one better and let the Lion tell a tale. So, come on back for that soon.

This is more than an alter. It will be very hard to let go of. It’s sparked some very unexpected feelings in me. But, alas, this very special card will go to the winner of Bootleggers Ball 2019. At this point we have raised over $1000 for the charity No Child Wet Behind and I hope that this event will bring people closer together and at the very least get us away from modern life for a little while and enjoy what will hopefully be a very beautiful day in May. Excuse the mush and this very cliché statement-Life is short. Don’t take anything for granted and be good to each other. I cannot thank Tom Wanerstrand enough for doing this. Thank you a million times. Keep moving, brothers and sisters. I’ll see you at the Ball.