The Wind in your Sails

Have you ever stopped to ask yourself what it is exactly that motivates you? Do you move through life quenching the fire from one desire only to be consumed by another? Or do you drive forward guided by purpose? 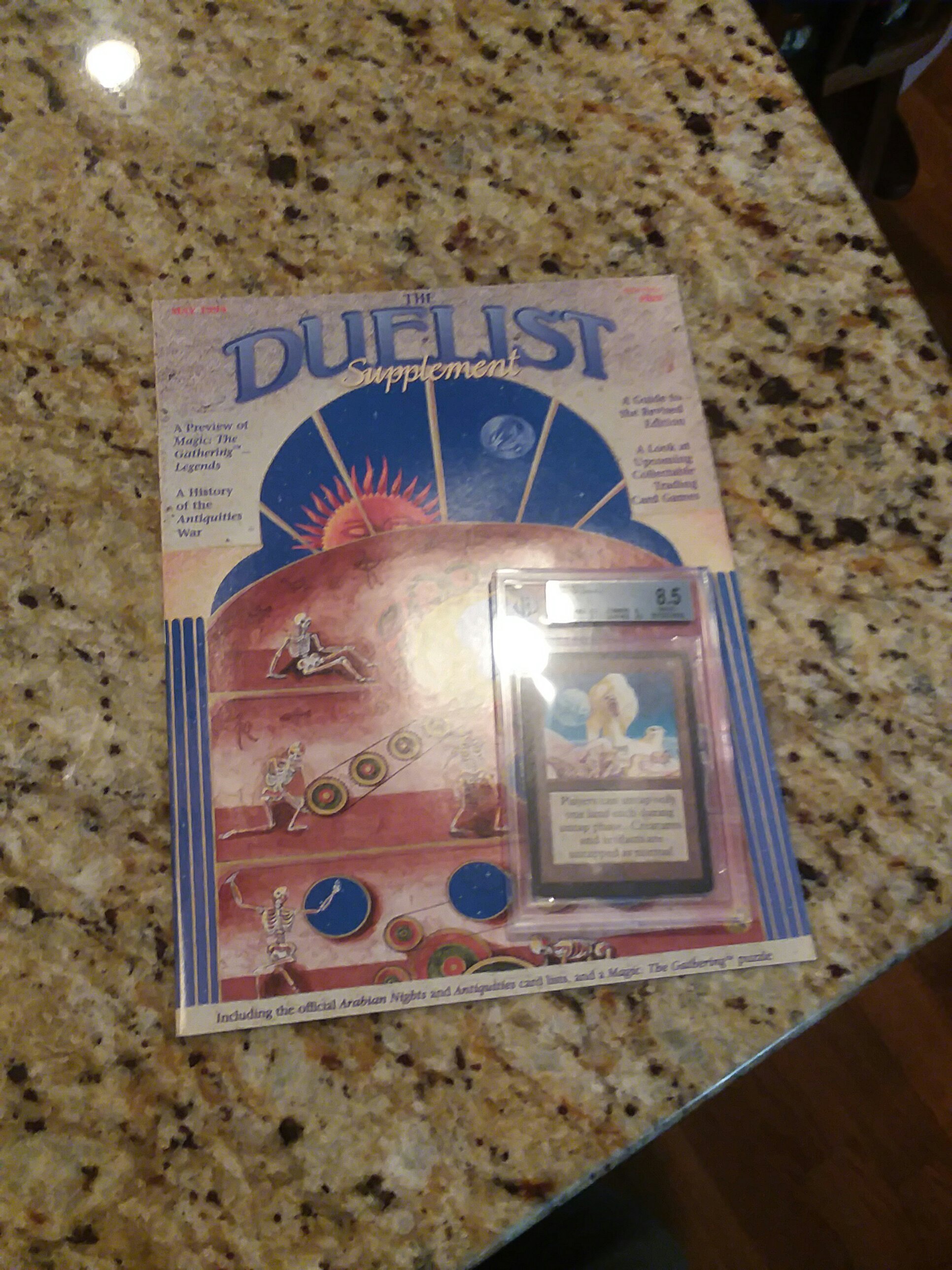 Or do you just buy random shit off ebay because it seems cool? Was a good read, enjoyed the cryptic allusion to summer magic

Life waits for no man. A million dollars won’t magically appear in your bank account. A new house or a new car won’t fall from heaven. The man or woman of your dreams won’t come knocking at your door. The greatest treasures of the world await only those with the heart to find them, no matter how long the journey or perilous the path. 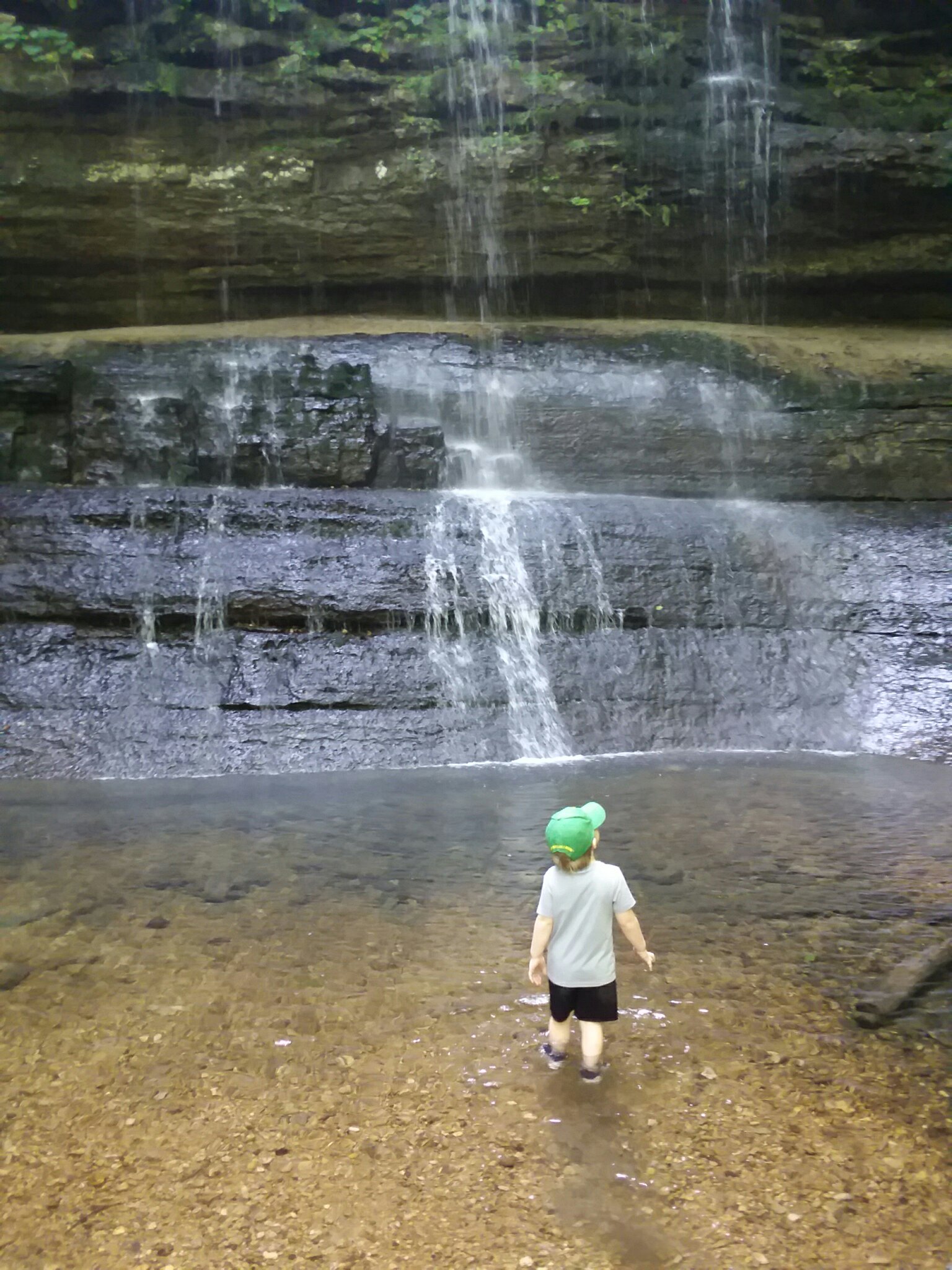 We took our kids on a short hike, about two miles round trip to see this waterfall on Saturday. I carried my one-year old daughter but little man made the journey through the rocks and trees himself.

Whatever it is you want to do in life get after it. We won’t always have what we have today when tomorrow comes. Fight for it if it’s worth fighting for. Be the wind in your own sails.

Old School Magic teaches you a lot about having goals. I approach this, and I hesitate to use the word, “format” with a fire burning inside me. It’s a lot more like a lifestyle. I’m not building decks to win a tournament or for any body or any reason other than myself and my own happiness. But no matter if you’re setting the goal to acquire your first piece of power or the whole nine in Alpha it’s gonna be a struggle. Right now I’m hunting high and low for an Alpha Black Lotus to replace my Collector’s Edition one. It’s been top of my list for several years. And it’s not just finding one, it’s gathering the funds to buy it. The two points in time as of yet have not met. It’s been disheartening watching the market dry up. I’ve come so close so many times this year only to find the one I was watching has disappeared or the price has gone up past what I could afford.

I came within seven cards of completing The Deck in all Alpha. A goal I had set two or three years ago. Of course those last seven cards were power and duals, and the time it takes to acquire the next piece was measured in months not days or weeks. 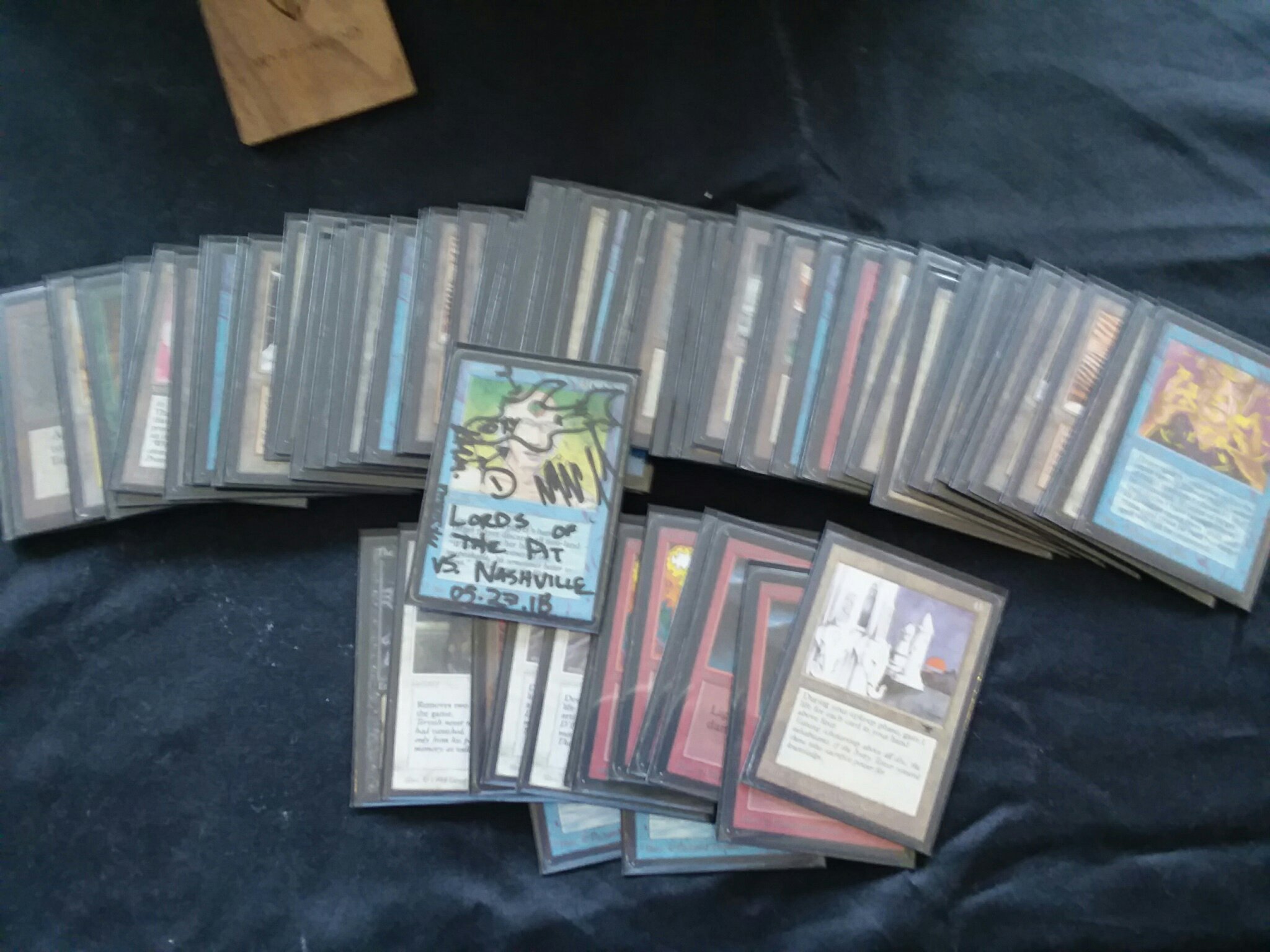 The only known picture of my “almost all Alpha” The Deck. Not big on deck pictures anymore, just ask Azure Drake why.

With a few Collector’s Edition stand ins I’ve played The Deck since February or so this year. Learning the intricacies of the father of all control decks was challenging, just as hard as finding an Alpha mox. It won a lot, but I noticed that I wasn’t having as much fun as I had with Mono Black or Erhnamgeddon. There is something inelegant in slamming an Abyss down knowing your opponent is locked out of a meaningful game simply by tapping four mana. There is something anti-climatic in activating a Factory several turns in a row while your opponent recovers from a Mind Twist. Sometimes on the way to completing a goal we realize we don’t even want what we thought we did in the first place.

Guess at the end of the day I just like blowing shit up. 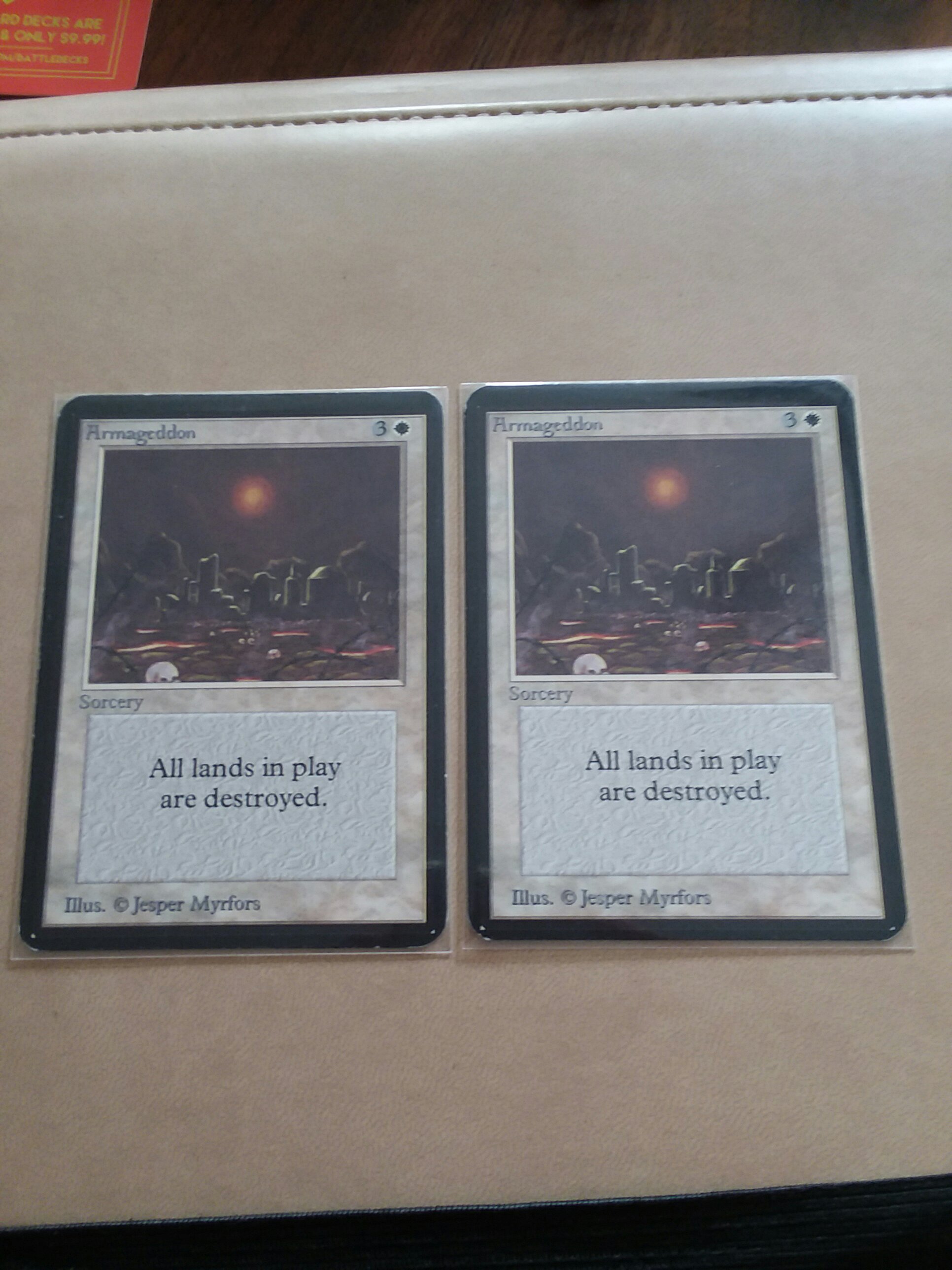 I made the tough call to downgrade a lot of my Alpha to Beta, and build a new (old) deck in the process. My old love. Of course I kept my pair of Alpha ‘Geddons though.

Building an Old School deck isn’t about having the most pimp deck or crushing opponents. Indeed winning such lopsided games actually detracted from the experience.

I’m more excited to see new faces at the Nashville Old School meet ups than to continue down the Almost-All-Alpha The Deck path. Especially this last Saturday. After our hike to the waterfall and a big lunch of Texas brisket and apple pie, I drove into town to an informal “tournament” of sorts held by Music City Old School MTG for a guest of honor. 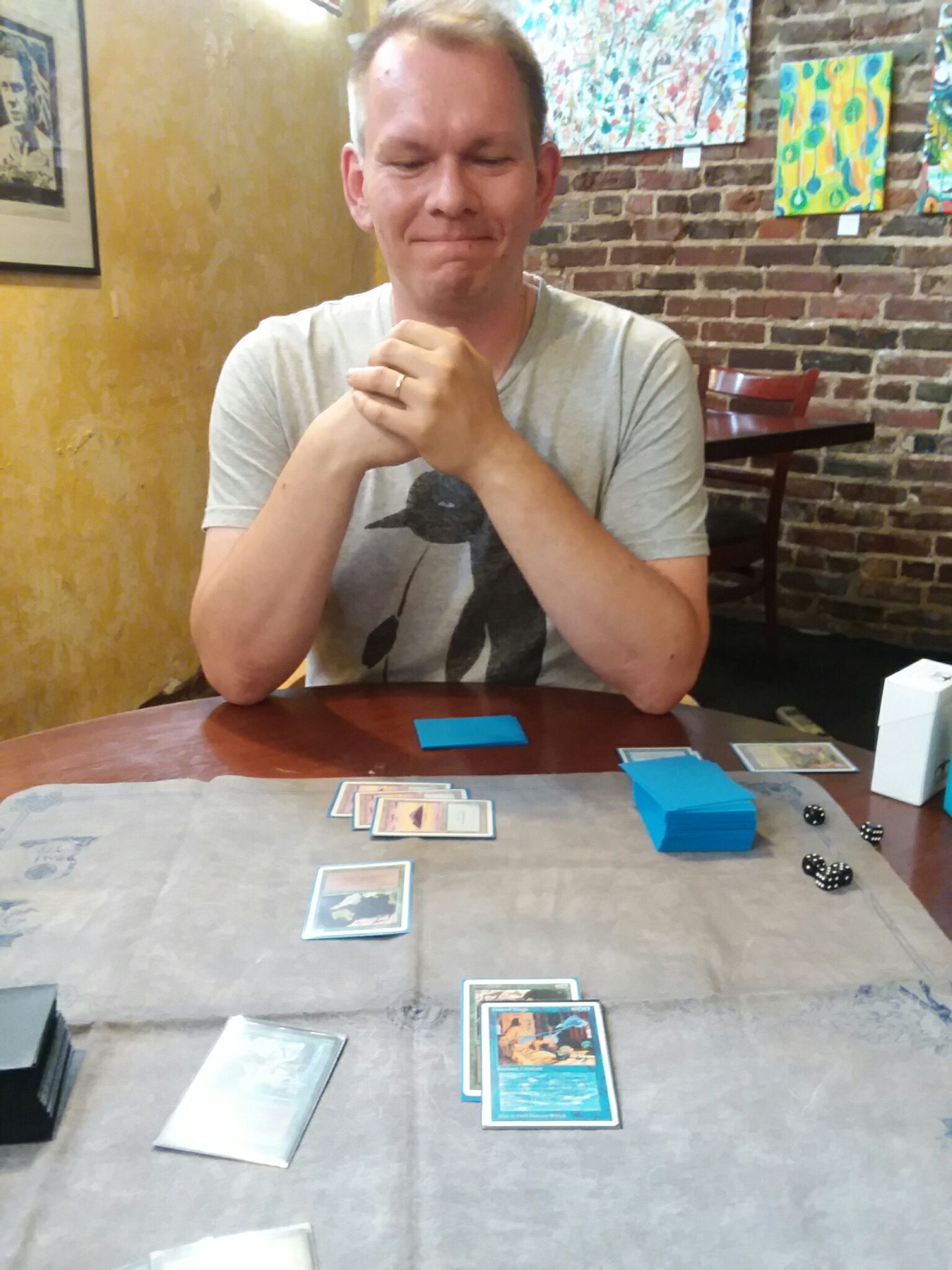 Came all the way from Finland just to lose his Efreet to control magic. And did it with a smile!

When Derek told me Timo had reached out to see if we wanted to play some games, I figured hell let’s throw him a whole damn tournament. We just paired ourselves until one man was left standing undefeated. 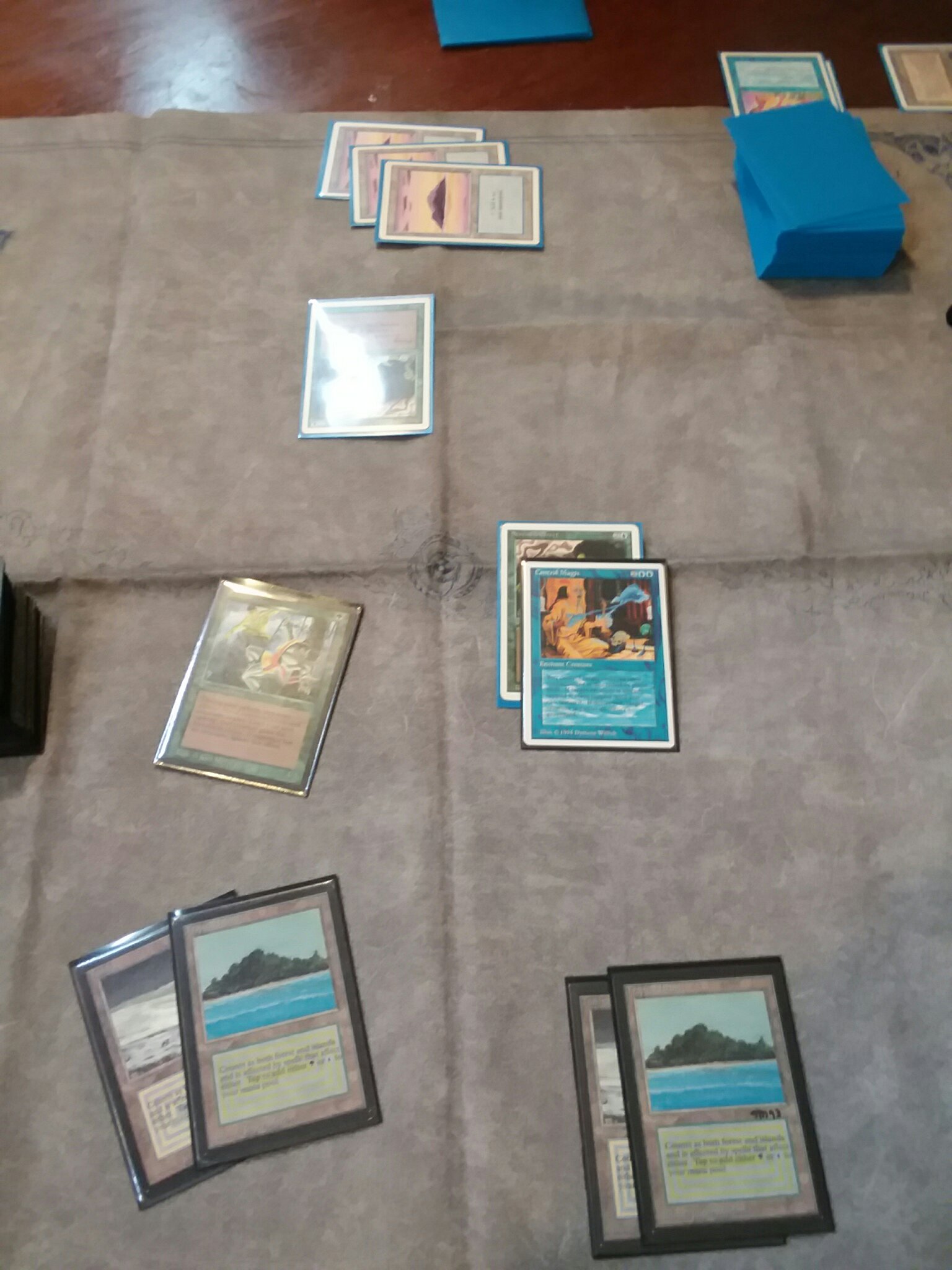 Yes, that was a Summer Control Magic on a Revised Serendib Efreet. Lot of strange Magic history goin on there. First time casting that since I got it by the way, a goal achieved in and of itself!

The small corner market where we gather could barely hold the excitement from the crowd of a dozen or so Old Schoolers. Some were familiar faces, some I had never met before.

One guy, who is a Nashville local, heard about our “tournament” through the grapevine and dusted off his old box of cards he dug out of the closet to come do battle with his Nevinyrral’s Disks and Blood Moons. Though he had sold his power a long time ago, I could tell he was enjoying himself and I hope he makes it out more. The guy gets it. He bought me and him a round of Dead Guy Ales for our second game and was telling me about Pro Tour Dallas in 1996 when he ripped that fucking Blood Moon off the top and slammed it down with a Royal Assassin and Hypnotic Specter in play. Hot damn that’s some fucking magic!

I played a game against Music City OG Zack and his version of The Deck which is pretty well tuned. The game went back and forth and I seemed to be gaining the upper hand when over the course of three turns he played some line like Balance (killing my Serra Angel and Serendib Efreet) into Time Walk, Timetwister, drew another card off of Library during his extra turn which was of course fucking Mind Twist and I kissed my hand goodbye as he began to get it in with a Factory. That’s also some fucking magic and even inebriated our games are always challenging and fun, though to be fair I’m usually playing some fully powered bullshit too.

Eventual Champion of the day Josh, who drove 2 or 3 hours to come throwdown with us ended up playing Zack next and I got to see him Fork a Disenchant onto Zack’s Abyss, which was pretty sweet. Didn’t take a pic, too caught up in enjoying the moment. 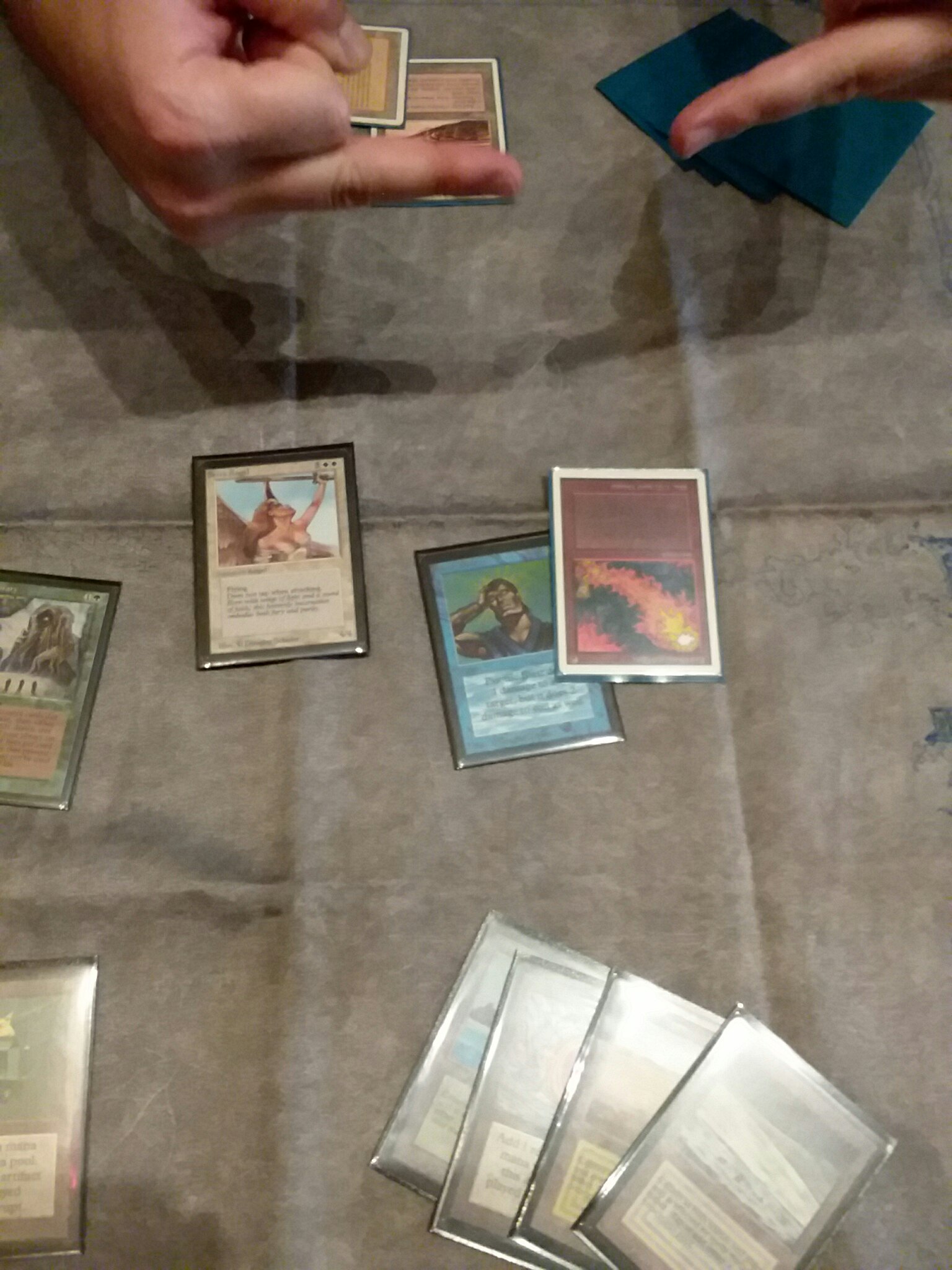 Another opponent of the day who, close to death, staves off his eventual defeat with a timely Red Elemental Blast. Two birds for the would be Kingslayer, Psionic Blast.

People floated in and out of the market, the air heavy with nostalgia and camaraderie. This is what it’s all fucking about. I’m proud Southern Old School showed up for Timo’s first experience in Nashville. When it came time to sign the prizes, I threw in an Arabian Nights Aladdin for him to take back to Finland. I love the flavor of that card, but hell I don’t even play red. I hope it ends up stealing some artifacts halfway across the world. I didn’t have time to play Josh, who was at 5-1 to my 4-1 so with the best records we settled who would be champion with the glorious martial tradition of flipping Chaos Orb onto the coveted Fellwar Stone. Josh is a fucking beast at flipping and beat me from two feet in the air. This guy makes you sign his Berserk when he kills you with it and the number of signatures on his Unlimited playset is growing all the time. A well deserving champion if I ever saw one!

I may not ever achieve my goal of acquiring an Alpha Black Lotus. But it doesn’t really matter. The fire is burning brighter inside of me than ever. What we have built here, what we are building has outgrown the five original Music City Old School members. It’s bringing people together to experience something real, not something behind a computer screen or on a TV. The journey isn’t over yet though, far from it. It’s just beginning.