End of a Year: A horrible meet-up report w/ Recollections and Ramblings

Our gang is starting to mature. This is all casual fun of course, but we’re all in it. With life’s responsibilities, I can only acquire so many cards, but I did manage to pull in a pretty good haul over the past couple of months and among other things, completed my mono B deck. It needed some staples and I was finally able to get my swamps upped to beta before they reached an even more ridiculous price.  Another comrade just took a plunge and snagged an entire Collector’s Edition set. He will soon be taking extra turns and drawing 3 cards left and right. Brendon’s been working on a mono B creature-less control brew with other decks in the works and the two Zack(h)’s are still doing hard work with their pet decks, WW and The Deck.

I had the idea of doing something along the lines of a tournament report for each of our monthly meetings. Keeping track of matches and interesting board states etc, but I totally dropped the ball on taking notes. I’ll do what I can with this one, post some pics, and just rant a bit to make up for the lack of memory from a whole 2 days ago. 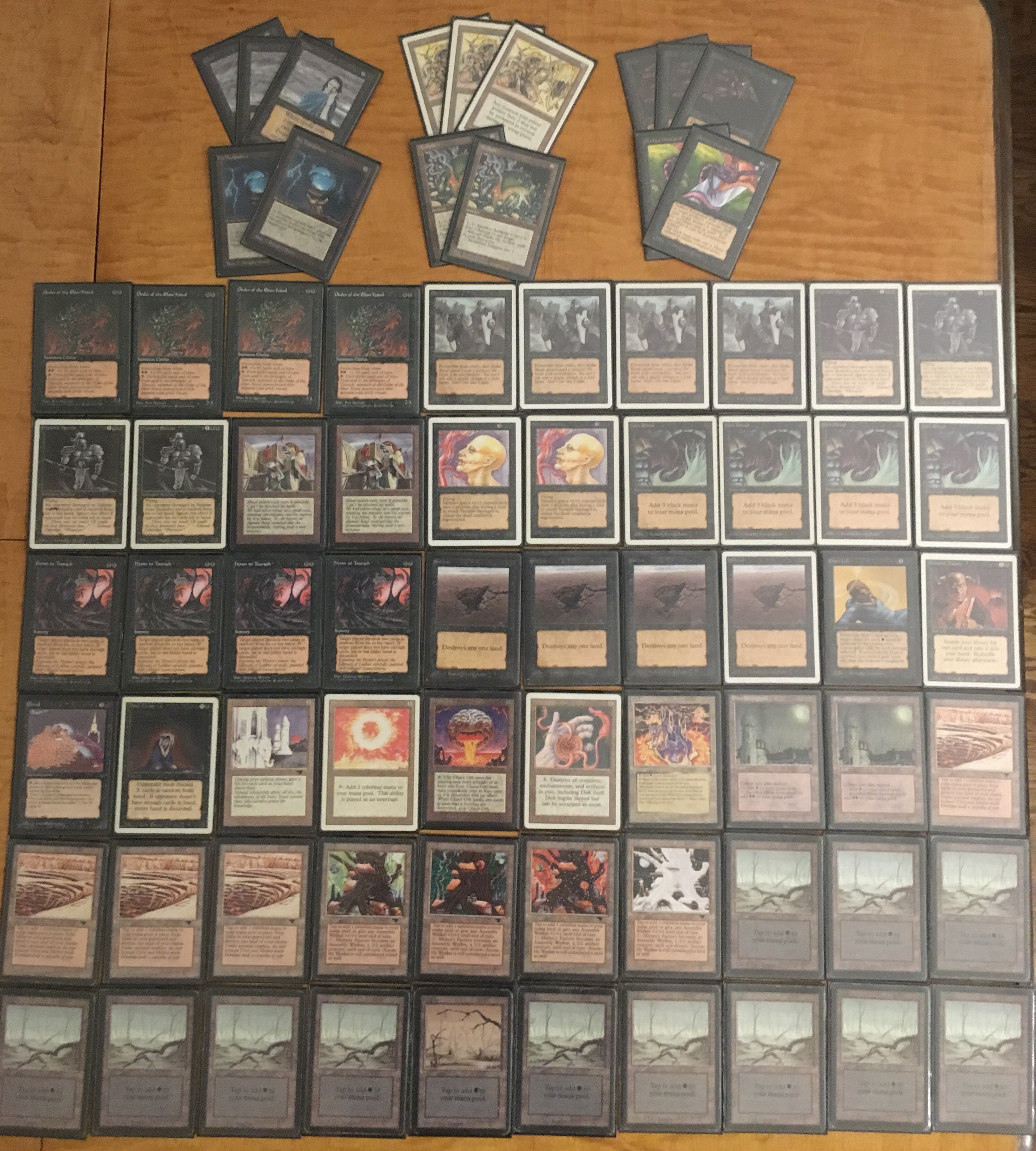 I played Zach B. first. As usual he was on WW, which he has recently tweaked a bit and it’s a rager for sure. I wanted to play my mono B deck, but Brendon was late and he had a couple of cards I needed, so I played my Sligh deck for the first match. I’m fairly burnt out on this deck. I played it during the last meeting as well as on Skype numerous times over the past month and while it’s fun, it hasn’t lived up to my expectations. Not a bad deck, but I have plans for reworking it. I ended up going 0-2 against Zach. I sideboarded like a monkey after game 1 and this deck hasn’t fared well against WW. Like I said, I didn’t take notes, but nothing especially interesting happened during these games, but I did board in a Flashfire and managed to cast it, which did absolutely nothing considering Zach had a Land Tax in play. Not the best card for the sideboard, but it was fun setting his plains afire. No clue why I didn’t put in Mana Barbs. I knew he’d board in CoP: Red and that’s exactly what they’re there for. Moving on. 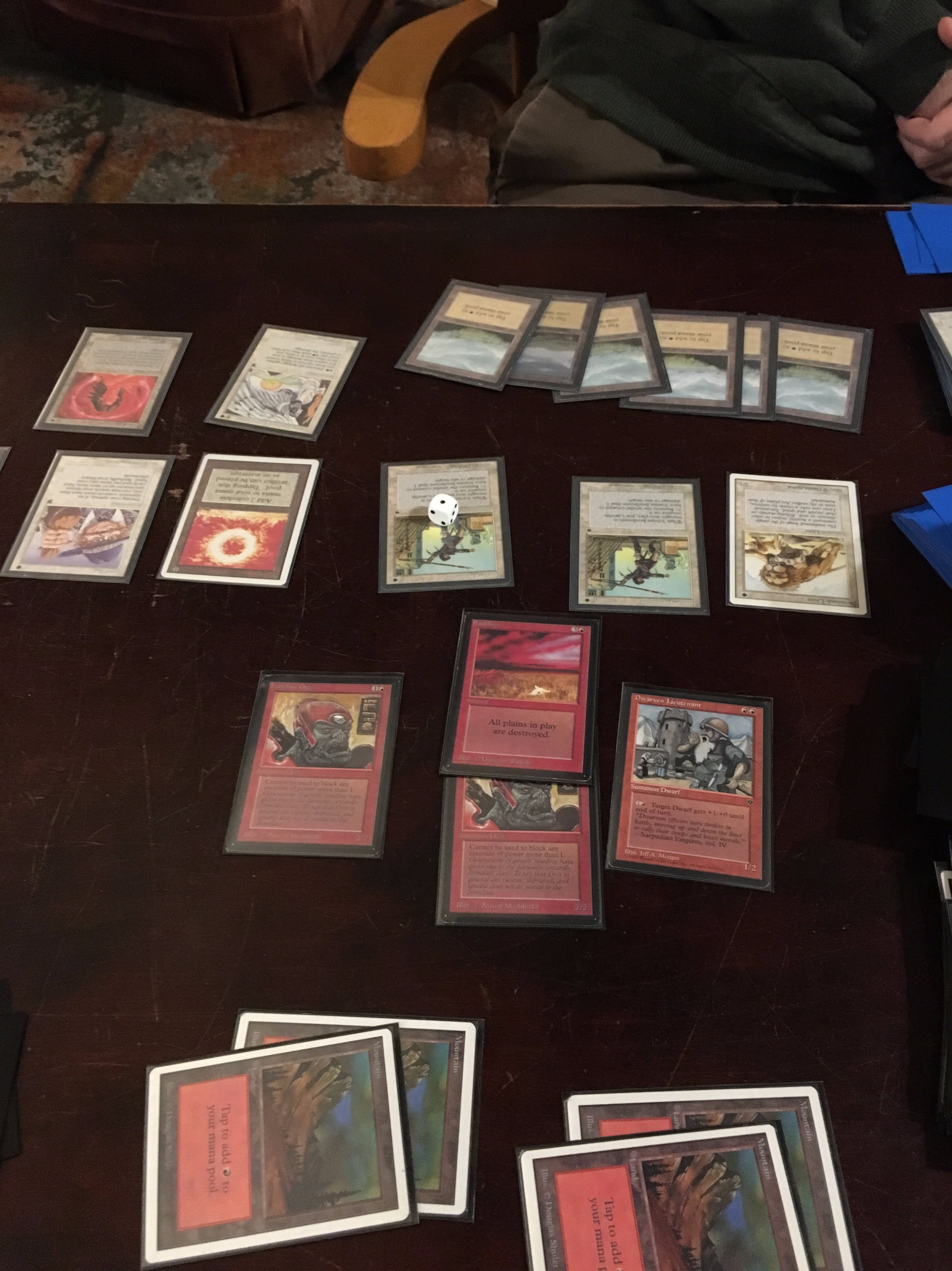 Brendon showed up with the goods and I start playing mono B. I play against the other Zack who was piloting The Deck. This is usually a pretty good match up and game 1 goes my way with a Hymn to Tourach on turn 2, 3……and 4. I felt bad for doing it, but it had to be done. I don’t remember much else other than some land destruction keeping him at bay while I kept a swingin’. Game 2 went to Zack. He played The Abyss, my least favorite card, and I stared at my hand until I drew a disk. I cracked it, but Zack cast regrowth on his Abyss and I stared at my hand some more while he assembled his lock. I finally drew Chaos Orb. I recently got this and haven’t missed a flip yet, which I announced right before I flipped and missed. The only other out’s I had were drain life and Mishras Factory, which I didn’t draw, and Juggernaut, which got disenchanted. The Abyss jammed hard and I died to a million tiny wasps, courtesy of The Hive. Game 3 I resolved an early Sinkhole and Mind Twist for 3. Zack was mana bonked and I beat him down with creatures for the win and got the match 2-1. We did end up playing another game or 2 while waiting for the other matches to finish and he got me with more Wasp/Abyss shenanigans. 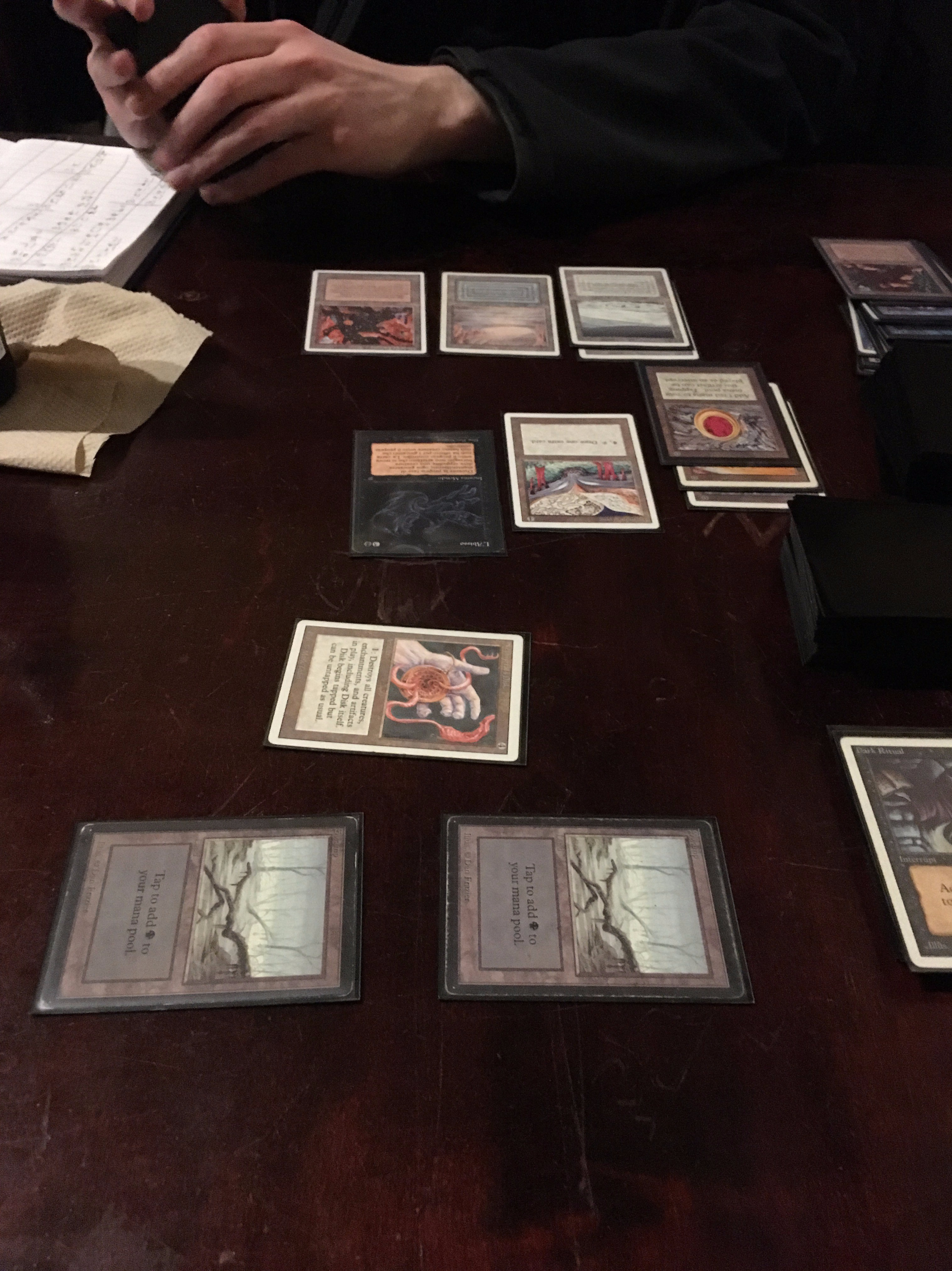 Not good enough. Where are all my lands??

Having an odd number of players, I sat out for a while and watched the Zack(h)’s battle is out. WW vs. The Deck. This matchup is always epic and ends up taking forever. Game 1 is fuzzy, but game 2 Zach (WW) managed to take care of an early Abyss and swung away with a Spirit Linked Order of Leitbur bringing his life total up to a whopping 42. Zack (The Deck) always seems to stabilize around 2 life and that’s exactly what he did as he trudged through his opponents 42 life points eventually resolving a mirror universe for the win. They shuffled up for game 3 and I went to check out Cayce and Brendon’s match. Cayce was on RG Berserk and Brendon on mono B control. During the first game Cyace got Brendon down to 4 with the beats. Brendon then cast a Mirror Universe, bringing Cayce to 4 and drained him for……4. Game 2 was a quick one as Cayce pulled off his first Channel/Fireball. The match ended up in Cayce’s favor. As a horrible recap goes, I don’t remember much of game 3, but I do remember Giant Growthed/Berserked Ball Lightnings. That’ll do it! 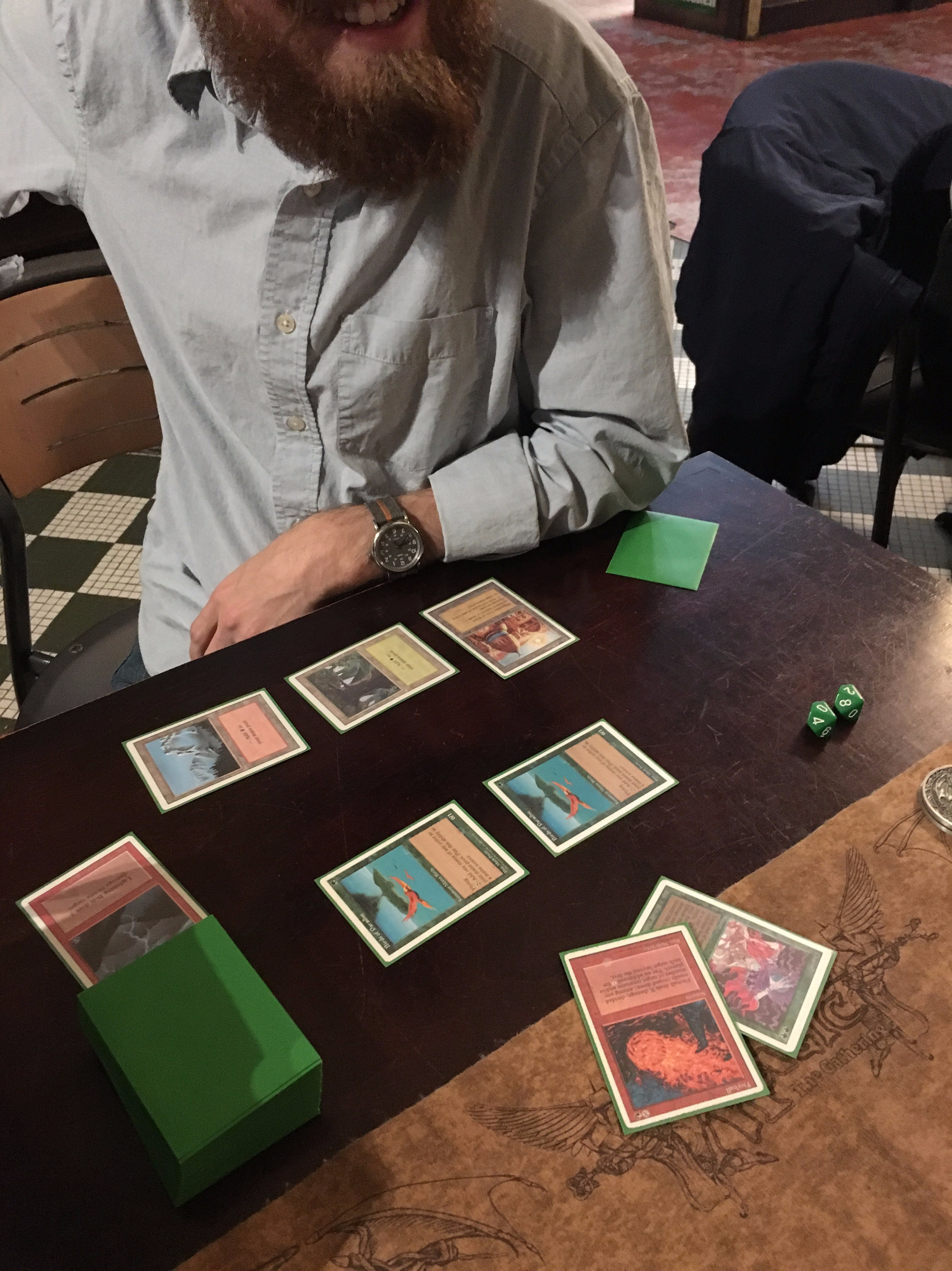 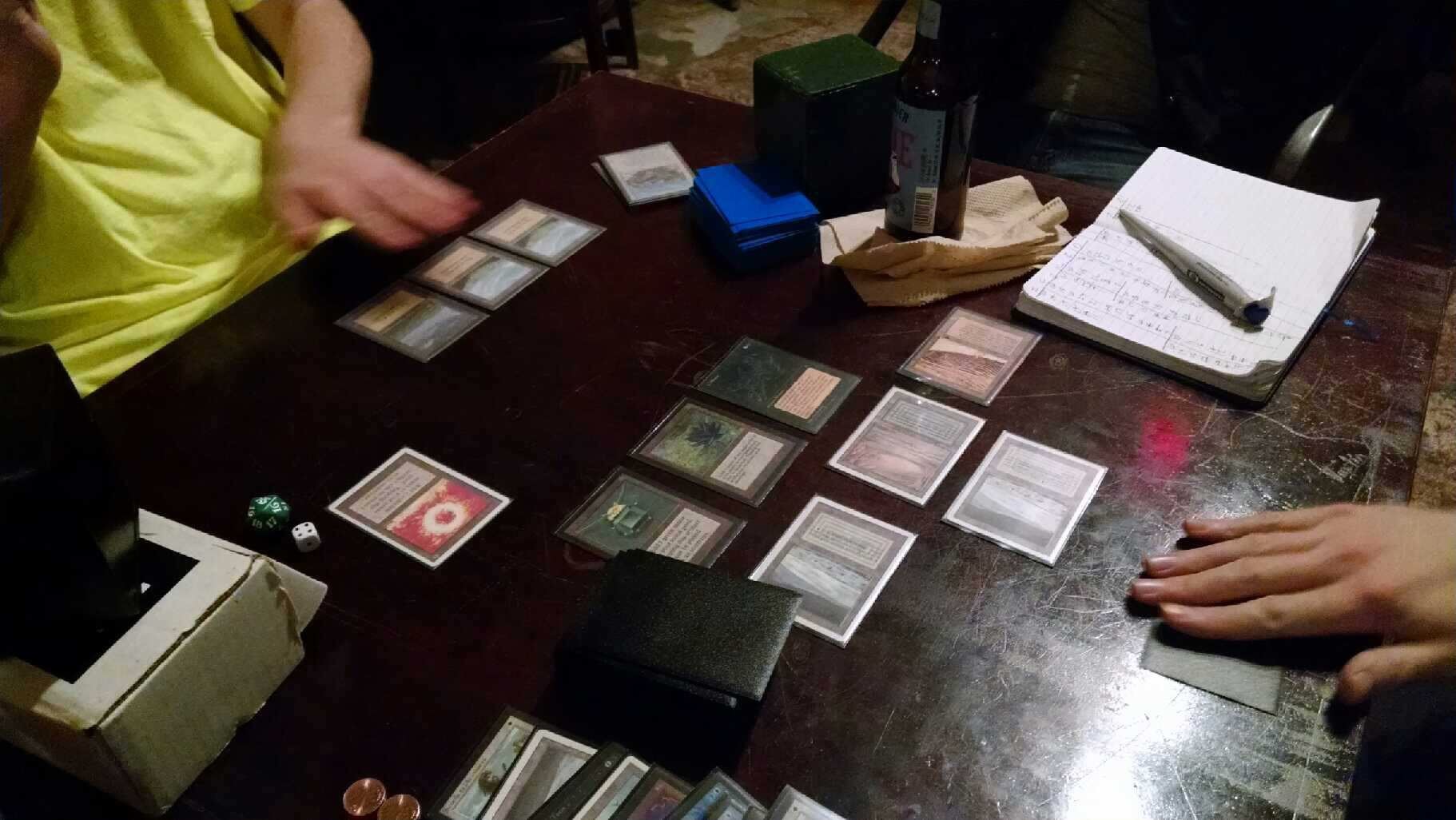 The only time I like seeing The Abyss on the board is when pro black creatures are on the other side. But, it looks like they were all plowed. 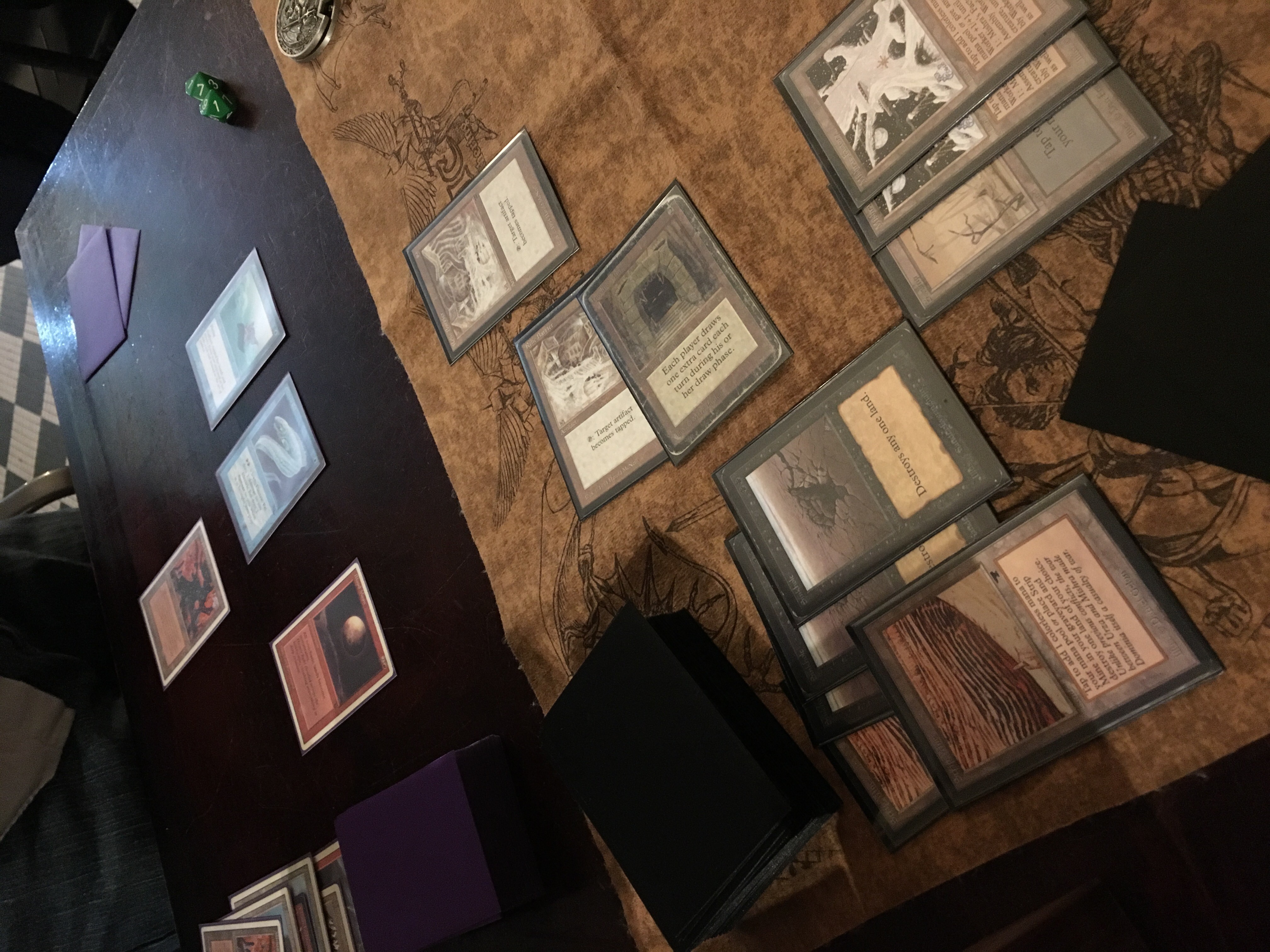 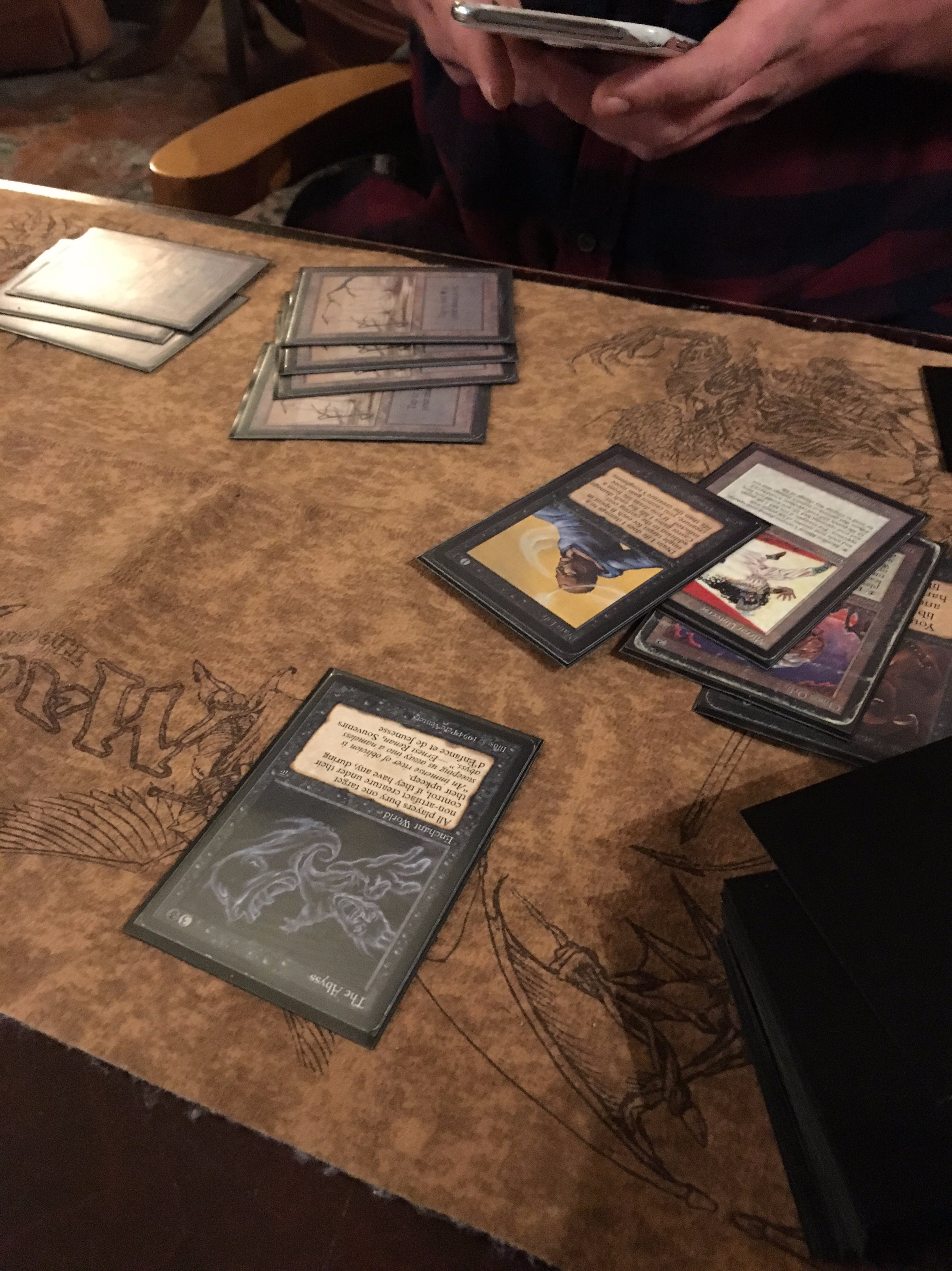 Due to time constraints I wasn’t able to play against Cayce and only got in one game against Brendon’s mono B control deck. It was a good tight game though. I cast a first turn Dark ritual into a sink hole and an Ivory Tower. Throughout the next few turns Brendon cast a couple of Underworld Dreams, so I kept my hand full to fend them off with the Ivory Tower. Luckily, the only creature I managed to cast was Hypnotic Specter, which slowly dwindled his life and hand away until he cast another Underworld Dreams and a Howling Mine. This was too much for my Tower to hold off and I ended up at 3 life and drew a Demonic Tutor. This was my last chance, so I sac’d my Ebon Stronghold for BB and went for a Chaos Orb, casting it with my only 2 swamps. During my next upkeep I flipped it on his Howling Mine and hit it. This allowed my Tower to break even with the damage from the Underworld Dreams and I finished him off with the Hippie. 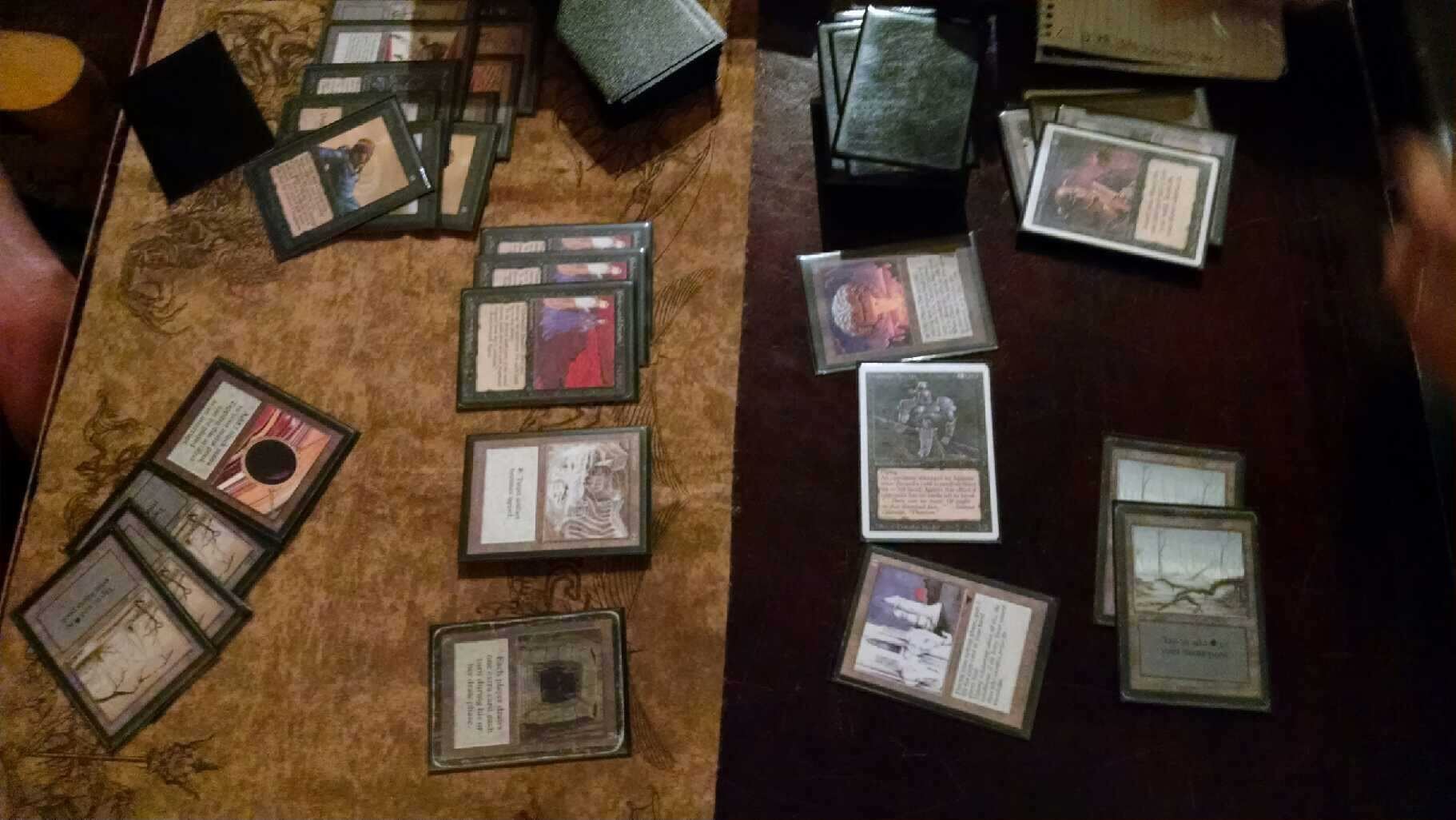 Cutting it close here. At 3 life, I was going to gain 3 in my next upkeep, but then lose all of it to the Underworld Dreams. Luckily I top-decked a Tutor, went for an Orb and took care of the Howling Mine before it was too late.

We’ve been meeting up since around June. As the end of the year approaches, looking back at our first meet up, we’ve come a long way. I remember the first time we played having a half assed mono B deck with Black Knight proxies! We’ve got at least 10-12 decks between the 5 of us now, gained a new member, and more importantly we’re having a lot of fun and playing consistently. I never thought I’d have anyone to play with, much less have a great group of dudes that are all on the same page. I know at least a couple of us are planning to attend a couple of the bigger old school tournaments next year. Probably the Player’s Ball and whatever else pops up that we’re able to make the drive to/have time for. Hopefully our deep dive into old school will fare us well in these events. 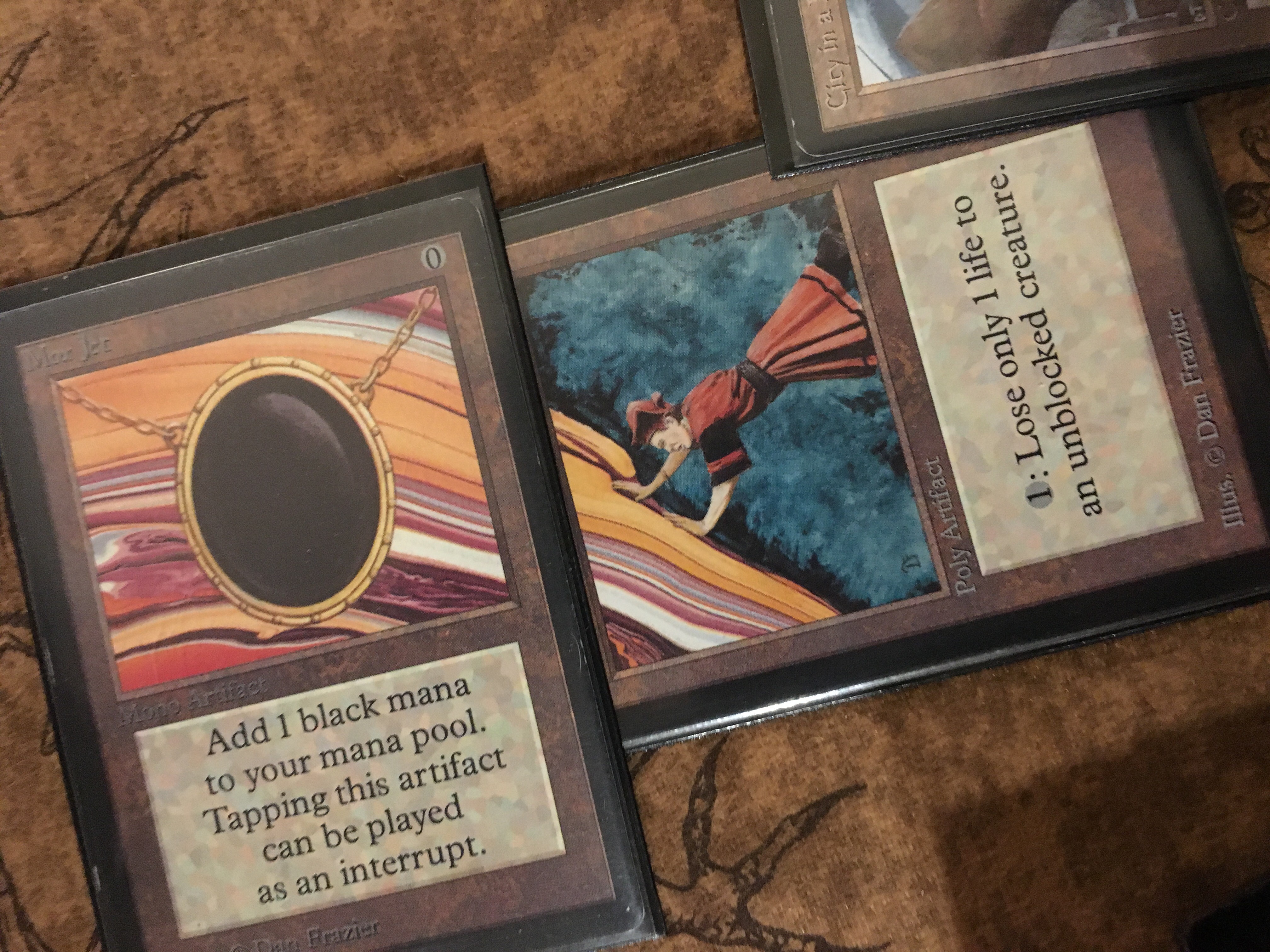 I’m not sure whats going on here, but its cool as hell.

This is my only hobby now. This is what I do for fun, for a release and an escape from reality. Everyone has their thing-restoring old cars, playing sports, collecting vinyl, whatever. If you’re not dipping into your kid’s college fund and scraping for groceries, GO DEEP! I sometimes have buyer’s guilt and some kind of self-reflection when it comes to playing Magic and buying cards. Am I really spending this much money on little pieces of cardboard so I can play a game? I also caught a lot of shit from ass holes in middle school when I used to play as a kid. Why is your past time better than mine? But, if I dig a little deeper, there’s more substance to it. It’s more than just playing a game. Playing old school magic has so many things I enjoy and different aspects to it; you get to collect and seek out relics, there’s competition, great artwork, you meet people, and there’s community building, especially in this format. Having this blog and a solid group also makes it feel like a project of sorts and being a part of something that has such a strong cult following is really cool. That’s a lot to get out of one hobby. So, why the hell not? How is sitting around studying statistics for a fantasy football league for 12 hours cooler than playing Magic? It’s not. I’m not sure how I got off on this short tangent. I guess just looking back on how I’ve spent my time for the better part of this year just made me think about it. Most of my friends don’t play Magic and have no idea why I’d spend X amount of time/money on a card game. That’s cool though. I don’t understand why they watch football when they could be watching hockey.

I chatted a bit with one of the fellas before we left the meetup. Both of us raised hell and played in punk bands as youngsters. There are definitely worse things we could be doing in our free time. I’m glad we stuck to slinging old card board and not something else……….drugs. Go deep.