“What the fuck is a sideboard?” I asked myself this as I watched a VHS titled “MTG: Road to the 1998 World Championships” when I was around 11 or 12. Way back in the late 90’s I had gotten super into the championship decks. I bought a few and ended up with this video and I watched the hell out of it.

I always played extremely casually as a kid, because, well, I was a kid. I never used a sideboard, but I did have a playset of beta Lightning Bolts and some Ball Lightning’s signed by Quinton Hoover that a young me swindled out of a dude trying to keep up with the times. 20 years later I’ve got a beat up set of revised bolts, but they’ll do. I always liked playing fast aggro decks, especially red. While watching that old championship video, Dave Price’s Deadguy Red deck intrigued me. It was basically an updated version of the original Sligh deck. I recently found this video again on YouTube and after taking a dip in the nostalgia pool, I made up my mind that my next deck would be an Old School Sligh deck.

Now, I’m not one to get too tech-y. I’m not the best player, I just like having fun, but I thought I’d at least share my deck with you and what I do know about Sligh in old school. I’m sure most people in this format are familiar with the way this deck works, but Sligh is a mono red deck that utilizes the concept of mana curve. A man named Jay Schneider thought up the idea and Paul Sligh originally piloted it in 96’. It uses a tiered system regarding casting cost; more 1cc creatures than 2cc, more 2cc than 3cc, etc. It also uses a hefty amount of direct damage spells and some artifact/land hate. The idea behind the mana curve is that the deck wants to use all of its mana on every turn, starting from turn 1. It comes on strong and doesn’t let up and it can be very hard to deal with. That’s the very minimal gist of it.

I brushed up on the deck before I built it. I found some really great articles on Sligh, but the one that was most helpful was on the Classic Dojo. I just stayed within the confines of the suggested mana curve and went from there. It’s an extremely easy deck to build, but here’s my take on it. 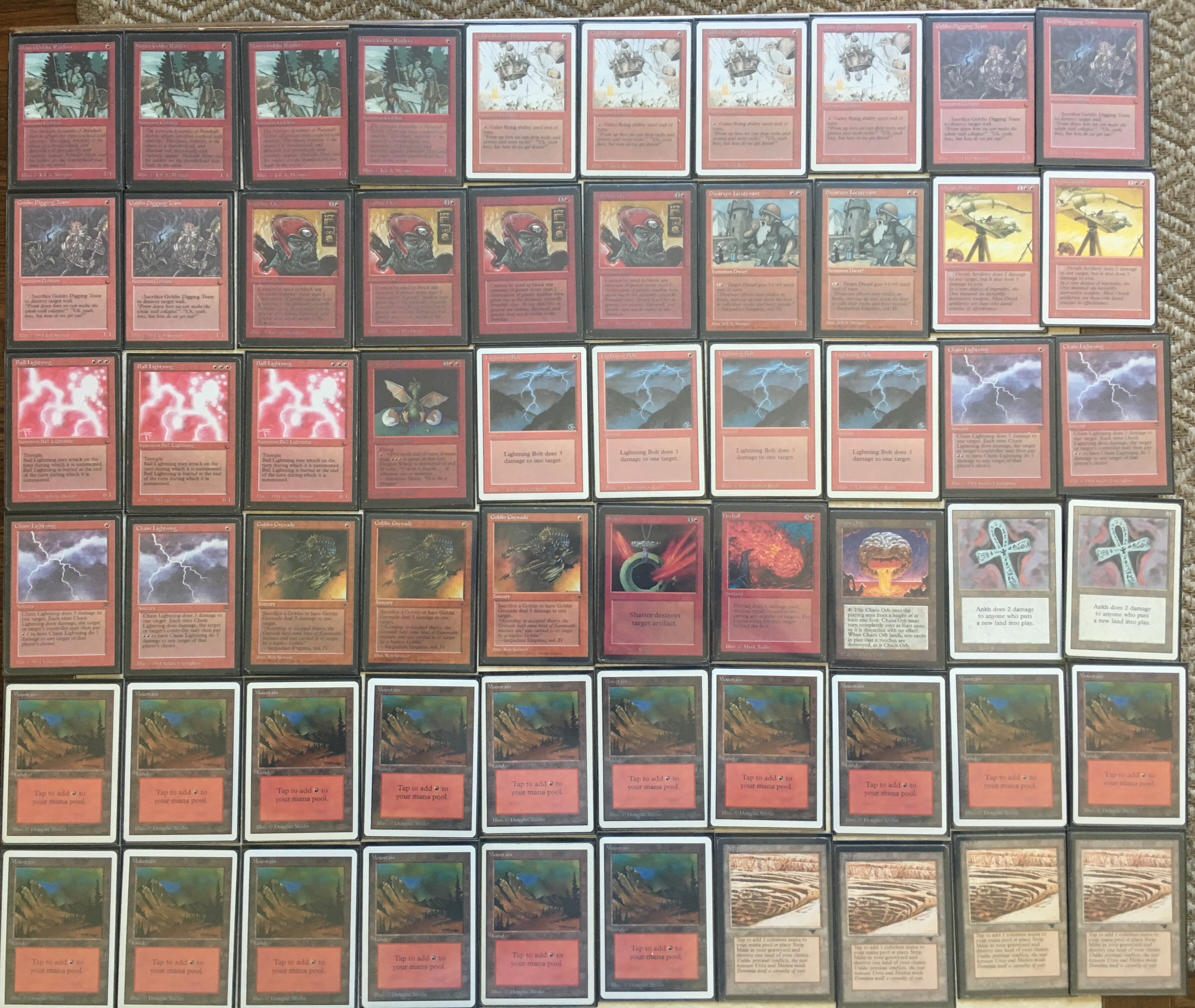 I’ll start with the creatures. The 1 drops were pretty easy choices. I went for all the goblins, but the one that may stick out a bit is Mons’s goblin raiders. I opted for them over the more popular Goblins of the flarg because I knew I wanted Dwarven Lt. in my 2 drop slot and some goblins just don’t get along with dwarves. The 2 drop slot was not as easy to fill. I knew a playset of Ironclaw orcs was making the cut, but I had two more slots to fill. There aren’t a lot of 2 drop red creatures in old school, but I had landed on Dwarven soldier or Dwarven Lt. I went with the lieutenant because he can pump himself and he’s a great late game mana sink. The 3 drop slots were also pretty easy. Ball lightning? Yes. I almost put in four, but decided on three due to space as well as a somewhat hefty RRR cost. Although the deck is mono colored, I’m only running 16 mountain and with strip mine running rampant, I found that it was not always easy to have 3 red sources on the board. Orcish artillery finally made the cut for the other two 3cc slots. I went back and forth between some other options, but I finally realized what a great card this is. It can ping djinns and other fat boys into bolt range and big creatures are this decks worst nightmare. I take 3 as well? Who gives a shit? The only 4 drop slot belongs to Dragon Whelp. I also had a hard time with this one, but I thought evasion + mana sink couldn’t hurt. I also thought that by turn 4 or 5, or whenever I’m able to cast him, the opponent should be low enough for me to pump him 3 or 4 times and swing out for lethal.

The spells were all pretty easy. The 8 obvious choices are playsets of Lightning bolt and Chain lightning. A tougher choice was Goblin grenade, or how many rather. I knew I wanted to use it, but not sure how many. 5 damage for R and a goblin is awesome, but I can’t go saccing my dudes left and right, so I went with 3. I could probably even drop one more, but so far so good. Ankh of Mishra is really good. It works great early on and/or after stripping a land or two. This deck can run on 2 or 3 lands just fine, so it’s not bothering me. Chaos orb needs no explanation, but I just got this orb and ended up flipping it 4 times in our last meet up. I’m 4-0 in flips with it! The last two cards are a single Fireball and Shatter. Fireball is a good finisher and Shatter will take care of annoying Ivory towers, Mirror universe, or whatever brown card is in your way.

I’ll end with a quick breeze through the side board, whatever that is. I only lack a few cards, but this is what I’ve decided on. Since I don’t have all the cards for it yet and some are shared with my RG deck, here’s the list.

The 3 Mana barbs have proven to be great against The Deck. I’m sure they’ll do some work if I ever go up against CoP red as well. A couple more shatters for artifact heavy decks. 3 Red blasts for Serendib efreets and other stupid blue cards. Brendon tore apart is UR deck, so locally, they’re not doing much. 1 more Orcish artillery to fend off fatties. Another fireball just because and a couple of blood moons to do what they do. 1 Meekstone, again with the big creature hate. Last, I put in a couple of Flashfires. Definitely not the most effective thing against WW, but I figured if I burnt all their dudes and then their plains, it’s probably game over.

I did alright with this deck in the last meeting. I went 3-1 with my only loss to 1 of 2 white weenie decks I played that evening. Minus the Orb, it was way less than $100, so it’s a great budget deck. Anyway, I recommend checking out that cheesy championship video. The final match between Mike Long and Matt Linde is pretty awesome. Despite what some think of him, Long is a fun player to watch, especially when he loses. Interestingly enough, he lives in Nashville. Maybe we can get him to join our gang….