Cayce (emphasis on the C.E.) here. Derek and the Lion were unable to attend the recent Rukh Cup in St. Louis, but I lead a quartet of my fellow Raiders to the Gateway to the West and partook in the joys of blowing up chickens. Though we were down some of our brethren, the four of us met up with some friends from Chicago and had a grand old time.

The Friday night before the Rukh Cup, we crammed pizza down our gullets and slung some not-so-old school cards. I had selfishly been trying to get the group to do something in the 1995-2003 time frame of Magic for some time. So when Middle School came along, I was ecstatic. We jammed many a game of Middle School that night, tinkered with our Old School decks for the next day, and eventually I turned in for bed at the late late hour of 2:00 am. For, you see, I am an Old Man. I’ll elucidate on my feelings of nostalgia towards Middle School another time. But I know two things after this weekend. 1. Squirrels are dope. 2. Value is fun.

The following day, we trudged out of the B&B and into the cold. After a hearty breakfast, we descended upon the venue with great anticipation. We were staring down the barrel of five rounds of Magic with a bunch of cool dudes–some new faces, some familiar. What will follow here in this post is my attempt at a tourney report. When tourney reports go up, I would be considered a Lurker in trying to gain as much info as possible on the deck I am interested in.  I am not the most skilled Magic player. I agonize over too many fun-of card inclusions. To say the least, if you’re reading this to get insight on how best to play or build RUG aggro/tempo… maybe take these as some lessons learned if at all. Otherwise, have fun reading my recollections of the day. Anyway, off to the races! 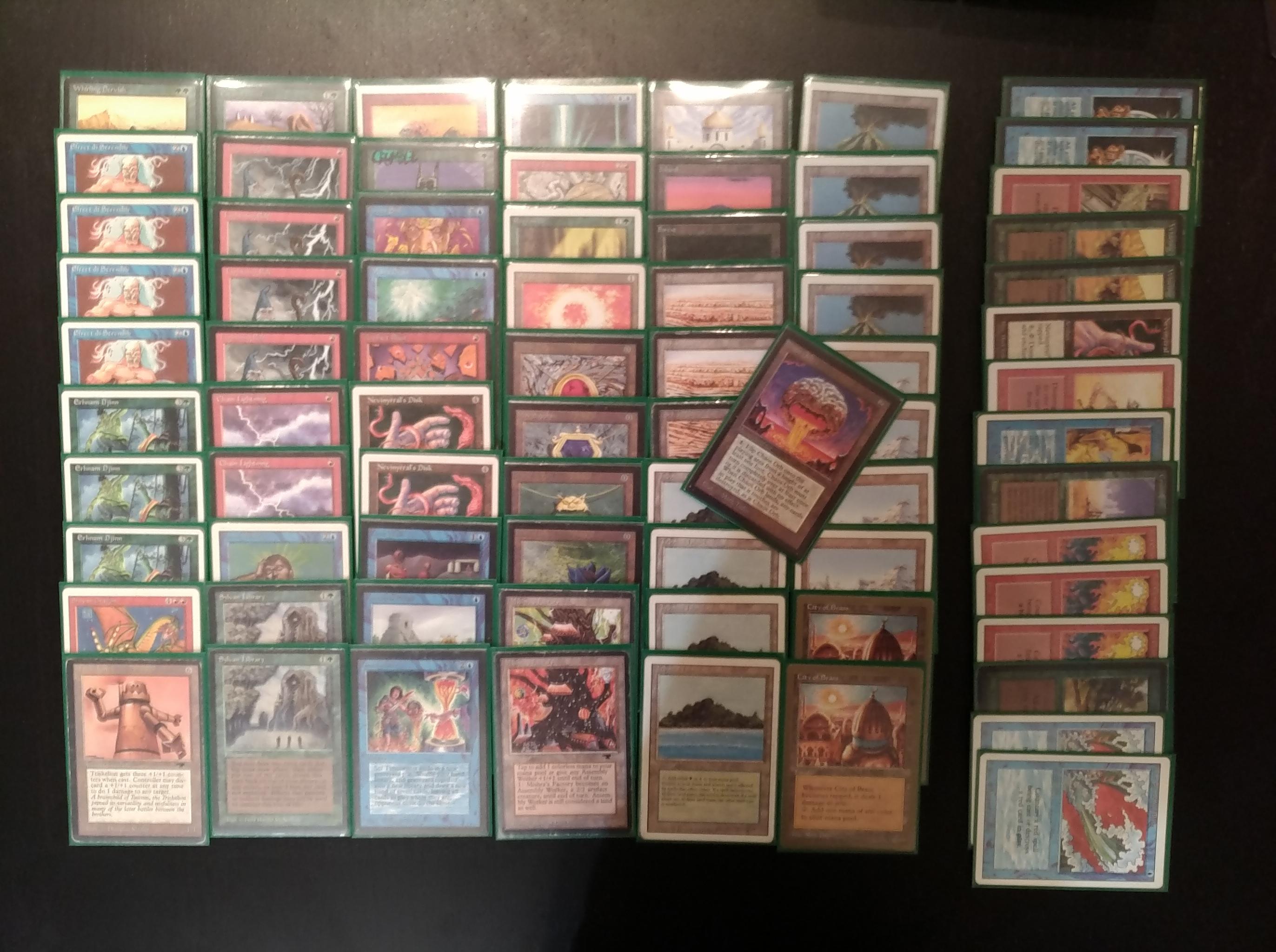 My weapon of choice: RUG.

For this tourney, I wanted to play the deck that I keep coming back to–RUG Zoo. Or tempo. I don’t know how to define tempo, but this ain’t it, chief. Overall, I just think it’s a beautiful deck. I like turning dudes sideways and slinging burn spells, so this fits me. It’s fun. But I wanted to break from the mold a bit. As such, you’ll note some unorthodox choices. First, I skipped Kird Apes. Instead, I went with 2 Chain Lightnings, and a Dervish and Citanul Druid for spice. Dervish is great and I wanted Druid to also be great. (Reader–they were not great.) Every deck I went up against on the day save one had Bolts in it. The other one? Terror. The Apes would have met a similar fate. I also ran a Trike because he’s a sick dude with a bad ‘tude. This being the Rukh Cup, I anticipated that Rukh Eggs would beget Disks, which would beget Trolls. Thus, Disintegrate main and side with the additional Power Sink to round out the support package and a surprise Artifact Blast main to nab City in a Bottle under a Blood Moon (this never happened). And finally, I opted to make all my Old School decks a full 60 before adding the Chaos Orb. Because I’ve talked myself into this being virtual card advantage. Also, I just want to play too many cool cards and can’t make the final cut.

Speaking of, let’s have a short break to listen to a very underappreciated Pink Floyd album:

Derek gets punk rock, I get prog rock. You guys are just gonna have to deal.

On to the rounds!

Round 1:
Here, I met John from Indianapolis. I believe he said this was his first OS event and that he crammed a pile together to join in. He sleeved up RGB Land Destruction, and it was pretty good. He wound up doing well on the day, from what I recall, but in R1 I gave him his first loss. Game 1 I managed to get a Mox Sapphire in my opening 7, dropping a Serendib under his Ankh/Vise. Despite land destruction, he couldn’t deal with the Dib and lost. Game 2 was no different. My first 7 here was just sick. Lotus + Dib + Mox + Land + 2 Bolts. That’s a hot start that John couldn’t recover from, and I am 1-0.

Round 2:
I then played hometown boy Kevin, on UBR Bazaar Reanimator. This is a deck I don’t see too often, so when I do I usually sit back in awe and watch it work me over. Which is what I did. Bazaar into Deep Spawn is hard to deal with if you aren’t running Swords. Eventually, I succumb to the Lobstah. Game 2 went even worse. I sided in Control Magic, because that’s a fun card and it’s one of my only hopes in this matchup. However, he rips an early Wheel of Fortune, dumping a lot of really mean dudes into the yard, along with my Control Magic. Then, a timely All Hallow’s Eve yielded three Deep Spawns and a pair of Trikes on the battlefield. Whelp. That’s me going down to 1-1.

Round 3:
Next, I’m matched up with fellow Nashvilian Jeremy Pratt on a GRW Tax/Tower/Land’s Edge list. We had jammed a couple games before the rounds started and I took quick wins there. But the same could not be said for the three games that counted. Game 1 had me dropping an early Dib backed up by Chains and Bolts for a quick win. Pratt never saw Swords or Tax/Tower. Game 2, on the other hand, was full of upkeep triggers. Pratt’s removal hit my guys on time. Dervish never grew beyond a 2/2, and Druid was bolted on sight. Timely Swords whisked my Ernies and Dibs away right when Pratt needed them. Land’s Edge got me. In Game 3 the same occurred. Pratt’s removal was once again in hand when I had a threat on board. And when Blood Moon hit the table, turning my Trops into Mountains, I sat there sad as I stared at my hand full of blue cards. After a valiant effort, I’m now 1-2. However, I am a Keeper of the Faith and believe that I can claw my way back.

Round 4:
This was easily the coolest match I played. Chris Wynes showed up with a spicy pile anchored around Fallen Angel (which I never saw) and backed up by Juggernauts, Two-Headed Giant of Foriys, and Bartel Runeaxe. I’ll tell you right now, he killed me in two games, but they were both fun and interactive and grindy. When two aggro-fatso decks bump uglies together, fun things happen. I can’t say enough good about the deck he played. It made such an impression, four of us in Nashville are now experimenting with Two-Headed Giant of Foriys in our respective decks. I commend Chris for having such an impressive 4 color brew here with creatures way way way outside the norm. It’s inspiring. Nevertheless, I was inspired to become 1-3.

Round 5:
The last round of the day was against James, playing UR Burn. UR Burn is the deck I started out with when I played my first tournament–2018’s Bootlegger’s Ball. It was neat to see someone else pilot it and I hope he had fun. But I knew what I was in for, and it was going to be tough. Game 1, I managed to land a Triskelion and get the kill supported by burn, and a flying genie of my own. After that, I knew Blood Moon was coming in, which absolutely destroys me. This deck is constructed to be less weak to Blood Moon than normal RUG builds, with a Trike, some burn spells, Big Daddy Shivan, and basics/moxen to help me cast off color things. I felt prepared. Then, in Game 2, the heavens opened and a wondrous opportunity presented itself to me.

As we reached the mid-game, I had a Strip and two Trops on the board, which helped get an Efreet down. But I had a burn spell in hand. After Braingeysering myself for only 2 cards off a Lotus, I felt pretty bad, because I had now drawn into two Bolts with no way to cast them. Within a couple turns I would be dead and I didn’t have the board to outlast an onslaught of two Serendib Efreets. I passed the turn, ready for a grindy wait for a Mountain. I had expected it, but not quite in such an opportune time–James plays the Blood Moon. My Trops are Mountains. My Strip is a Mountain. Two Dibs on board. Life check? He’s at 11. He attacks in and I take it. Pass turn.

I tap my lands, freeing 9 damage from my hand straight to his face. I don’t even bother swinging and I pass the turn. His Dibs eat him alive. That’s game. 2-0 in my favor off the luckiest bad-luck card for me ever. Below is a recreation of the board state, which is a wonderful thing to behold. 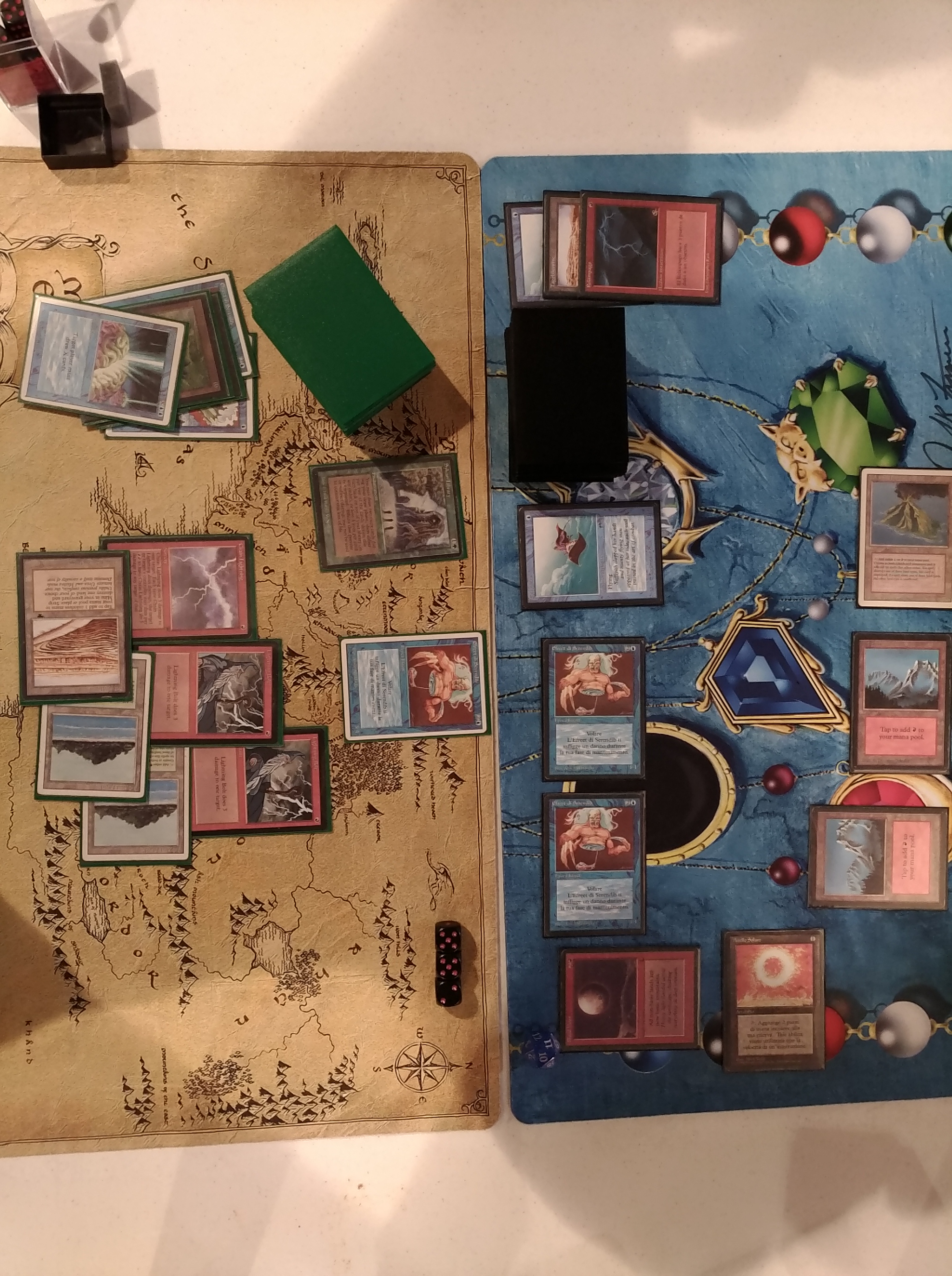 Now, if you’re counting, AND if you’ve been keeping up with my italicized references throughout this report, my record wound up being a respectable 2-3. I would have squeezed in more, but “Grapeshot Catapult” and “Hurloon Minotaur” are tough to work into a pun.

It was overall a wonderful event and an incredibly fun time. The guys in St. Louis are extremely nice and put on a smooth event with fun prizes at a rockin’ venue. I can’t wait to go up for the next one. After the event, me and the rest of my more successful Nashville crew retire to our B&B. There, I once again agonize over the choices in my deck. After considering my deck’s weaknesses and what I want it to do, followed by much tinkering and goldfishing, I believe I have settled on the list I’ll be testing for the next few weeks. You’ll see it in some form or fashion at the Bootlegger’s Ball this Summer. And you can be assured you’ll see ‘ol Foriys. 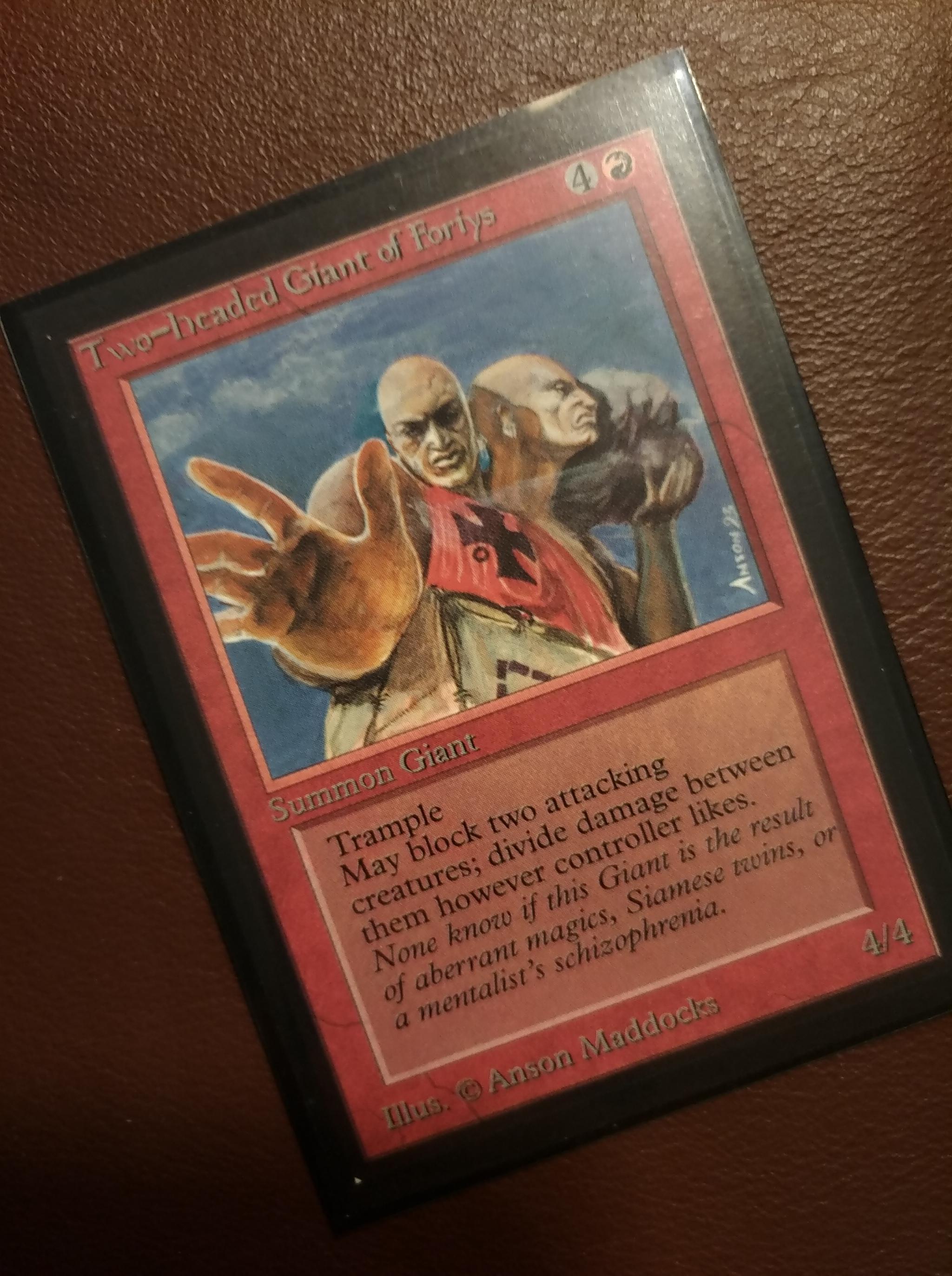 Til next time…
-Cayce