Deep in the waters….

When my brother and I gave up Legacy for good and decided to solely dedicate ourselves to Old School, we didn’t know how deep the 93/94 waters really were. We just dived in, like most people I’d imagine, with a Mono-Black deck and a Mono-White deck.

My Mono-Black deck started pretty good, with an Unlimited Mox Jet and a Juzam but also a Sorceress Queen and a Word of Command. My brother’s deck was a modest pile dollar wise but contained eight knights that didn’t give a fuck about any of the above and maindecked two City in a Bottle. (So who’s the evil one again?) 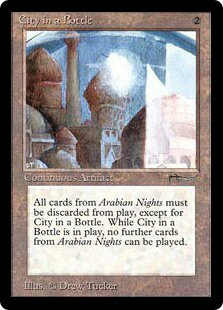 I simultaneously love and hate this card.

It became apparent to us early on that White Weenie was strong. Like really fucking strong. His whole deck cost less than my Jet (it was mostly Unlimited with a few Beta, we’re big fans of Swedish aesthetics with EC rules) but would regularly curb stomp the shit out of me.

It’s been pretty tuned and tested at this point into some kind of White Midrange. I think the newest innovation is, well I’ll just write out the list:

Looks pretty similar to most lists out there but the addition of the artifact mana and Trike make this a different beast. Gloom will barely set him back a turn, and the Trike will swing and shoot for seven even under The Abyss. The list goes bigger or right overhead in the mirror match, not to mention the three maindeck Preachers and four Javelineers that represent card advantage in a board stall. 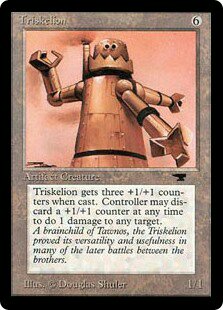 When you have a cheap (for Old School) deck that has a positive win rate against almost every deck out there, it’s easy to see why White Weenie is so popular. But I think there is room for innovation, and I’ve been Brainstorming some lists more interesting than your stock budget White Weenie lists.

Most stock White Weenie lists eschew any Arabian Nights cards in favor of some number of City in a Bottle. But most don’t play that either, for budgetary concerns I’d imagine. So why not play with some of the white cards from arguably the most powerful and flavorful 93/94 set?

Abu Ja’far was a leper in 1001 Nights who was cast out of every city and forced to live away from people. This is represented in the game by a kind of deathtouch that requires him to die as well. A 0/1 doesn’t seem that impressive but if your opponent plays any ground creatures at all you can think of him as Swords 5-7. It’s interesting to note as well that the Legendary rule wasn’t around until 1994 so you can have more than one of these guys in play at the same time. 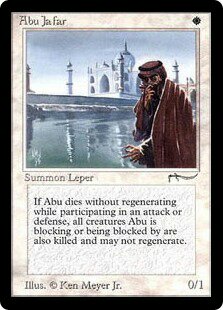 What the hell is he doing with his hands?

The one card you really don’t want to see as a White Weenie player is Earthquake. Repentant Blacksmith doesn’t give a fuck about an Earthquake. If you regularly play against Bolt decks this guy gives you a layer of protection against all that removal. It’s hard to say if this guy is better than White Knight but hey the Drew Tucker art is on point. 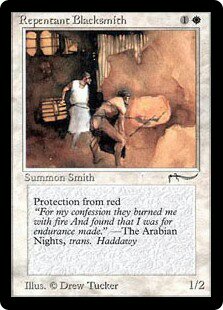 Moorish Cavalry is one of the few creatures in 93/94 with Trample, and while a 3/3 isn’t all that scary once you have a Crusade or Jihad on the table that’s one big Mack truck that will go right through a Mishra’s Factory. 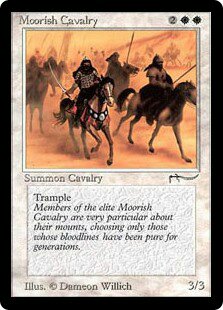 Here I’ll save you the time from having to look it up.

One thing I think this deck may have trouble with is actually the stock White Weenie lists with City. So I’d recommend sideboarding Righteous Avengers from Legends and maybe Wrath of God to break the mirror match. 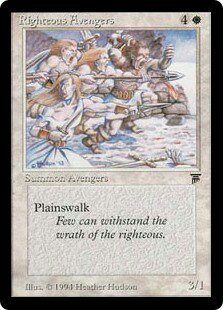 Now THAT is some tech for the mirror match!

If the flavor just isn’t enough for you yet, you could try out Dancing Scimitar, Flying Carpet, or Bottle of Suleiman. I think there’s some great choices in Arabian Nights that often get overlooked, and some may even be better than the choices in a stock list. 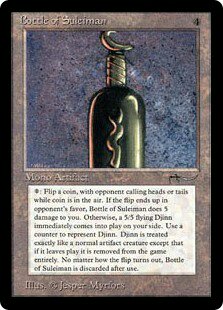 If you actually put one of these in your deck at Bootlegger’s Ball I’ll buy your first beer.

This deck I’d be pretty excited to see someone try and could probably be built for less than $200 if you skip the Mox Pearl for a Fellwar Stone or Mana Vault.

The idea would be to land a quick threat or two then keep all the opponent’s mana tapped down so they can’t ever really put up a defense. Use your Strip Mines to hit their untapped lands and Relic Barrier to untap your lands so you can swing in with your pump knights. I like Howling Mine here a lot because Land Tax will filter out your basic Plains and ensure you draw into your threats. 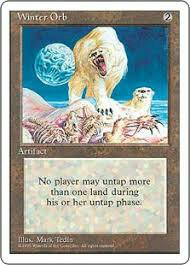 They just don’t make them like they used to.

I could see this deck having some bad opening hands, and having to take a mulligan. I think playtesting would uncover the right balance of threats and lock pieces.

Sideboard you could look at Meekstone, Kismet, and Black Vise to bring in against big creature decks or control decks and really put them out of the game. 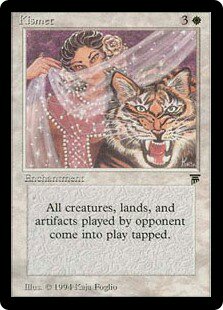 If you’re just starting out on a budget, White Weenie is a great choice. I’d rather play against White Weenie all day with good people than have nobody to play at all. But don’t be afraid to deviate from the norm. The 93/94 waters are pretty deep, and there are some great cards and strategies that can be executed even under a budget. Feel free to share your secret tech for White Weenie in the comments!