We held our first official Old School tournament this past weekend. Being a last minute decision to throw this thing, it ended up being just our group, minus 1. Despite having only 4 players and not much time to plan, it was a blast and a great way to end our first year. I’ve come to terms with the fact that I’m just not great at taking notes for a recap, but again, I’ll do my best here to try and give you a rundown of the first annual (hopefully) Gingerbread Jam (tentatively titled).

Since we only had 4 players, we decided that everyone would play everyone and the best record at the end would win. First up we had myself on Cheapguy red (sligh) vs. Zack on White Weenie. I was especially fearing this deck as I knew my mono red deck did not match up well against WW. Game 1 Zack kept a hand full of utility lands and stripped away my first couple of mountains and played 2 Mishra’s Factory. I played an early Ankh of Mishra and was able to deal with his factories and burn him out before he was able to snag a plains. Game 1 went to me on the back of Zack’s mana problems. Game 2 was a different story. I didn’t have a lot, or really any, decent answers for WW, so I boarded in Mana Barbs and a Flashfires. I knew he would bring in CoP:Red, so the Mana Barbs would help there, but the Flashfires was probably not going to do much, but it’s all I had. Nothing special for the first few turns. Zack played a land tax on turn 2 or 3, but I held off playing land with 3 mountains in play and kept the Land Tax from triggering. Zack seemed to need more land and was stalled at 3 plains for a while. I had burnt off all his threats and was bringing him down pretty quickly with a couple factories and goblins until he drew his fourth plains and cast Conversion, turning all my Mountains into Plains. My only removal for enchantments was Chaos Orb and that was in the graveyard. One of my three Mishra’s Factory’s had already been stripped and the other two were in play along with two Goblin balloon brigade. My only chance was to beat him with what I had out as I would not be able to cast anything else in my deck due to Conversion. I got him down to 4 before he finally dealt with both goblins and factory’s. All I could do was scoop. Conversion did me in. Game 3 Zack played an Icatian Javlineer’s on turn 1. This card is hard for me to deal with, so I was hoping to top deck some burn on my second turn, but no luck. I should have just cast a couple goblins for him to throw Javelins at, but I held them back hoping for burn that didn’t come. With another Javlineer’s on turn 3, Zack curved out and steadily cast creatures, eventually winning the match 2-1. 0-1 for me.

Where the hell is that 3rd mountain?! 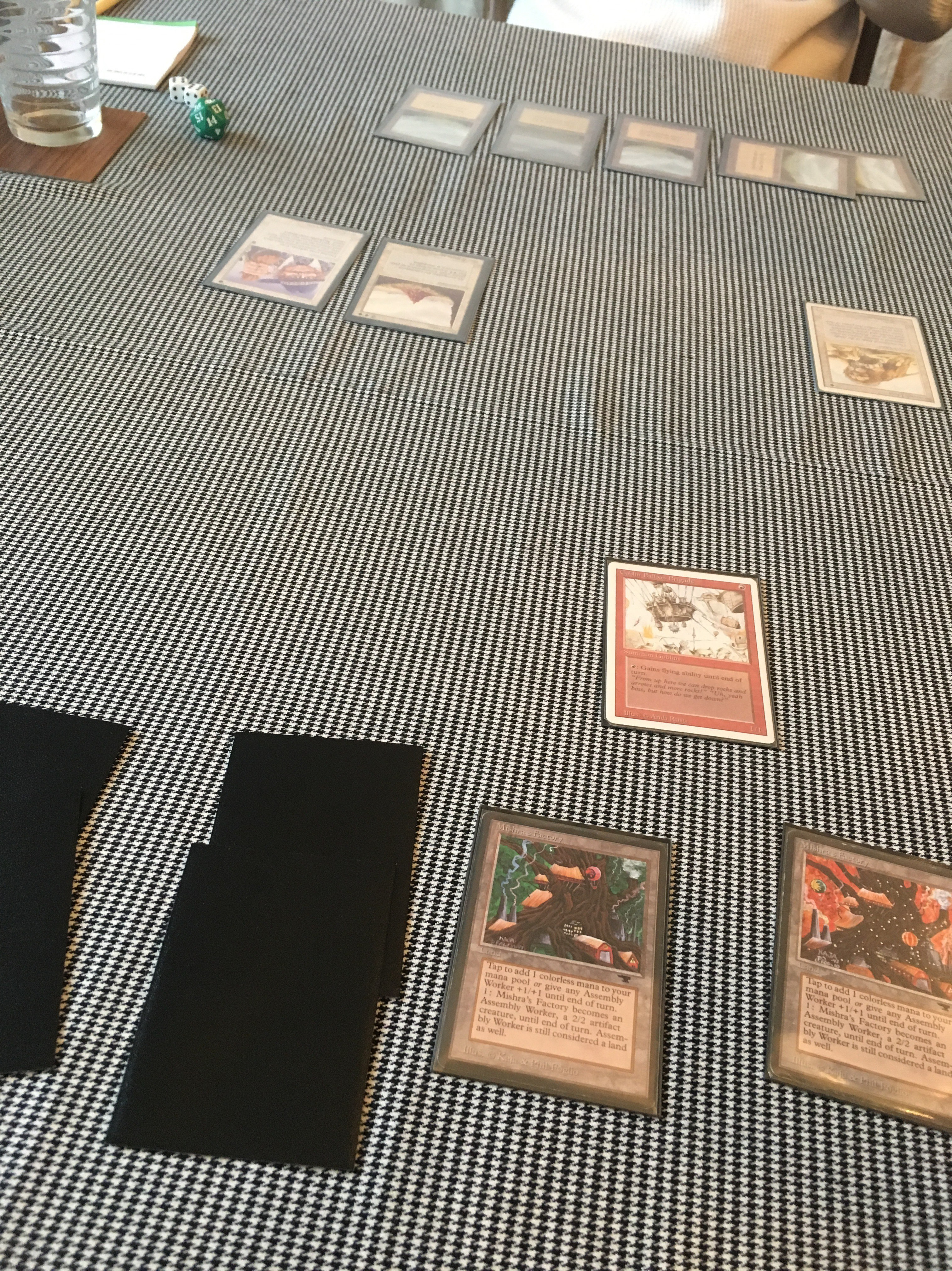 On the other side of the table Brendon was on UB Suicide beat down against Cayce’s UR Counterburn. Game 1, Cayce plays some newly acquired power and resolves an early turn 1 Serendib Efreet. Other things happened but I don’t know which things. I do know that those things were in Cayce’s favor and he got game 1. Game 2 Cayce was able to shut Brendon’s beats down with a blood moon for a short time until Brendon flipped and hit it with a Chaos Orb. Other than that, game 2 is a blur like most and went to Brendon. Game 3 ended awesomely. Brendon was down to 3 with Juzam, Mishra’s Factory, and a Hypnotic Specter on the beats while Cayce was at 8. Cayce cast a Lightning Bolt for the win, but Brendon responded with a Blue Blast. Cayce responds with a Counterspell. Brendon said no, and responded with a second Blue blast. Cayce passes and Brendon swings for a close win. 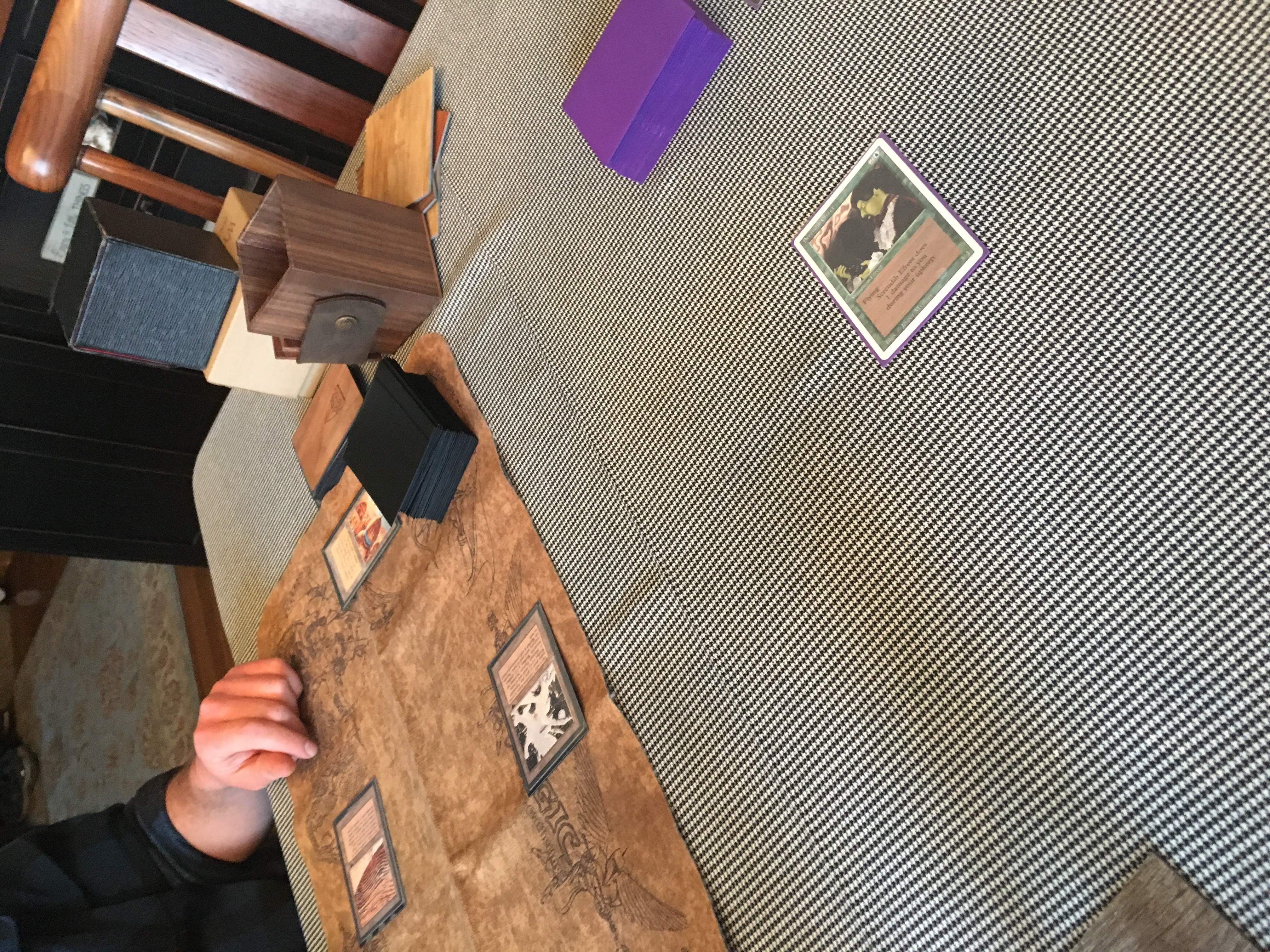 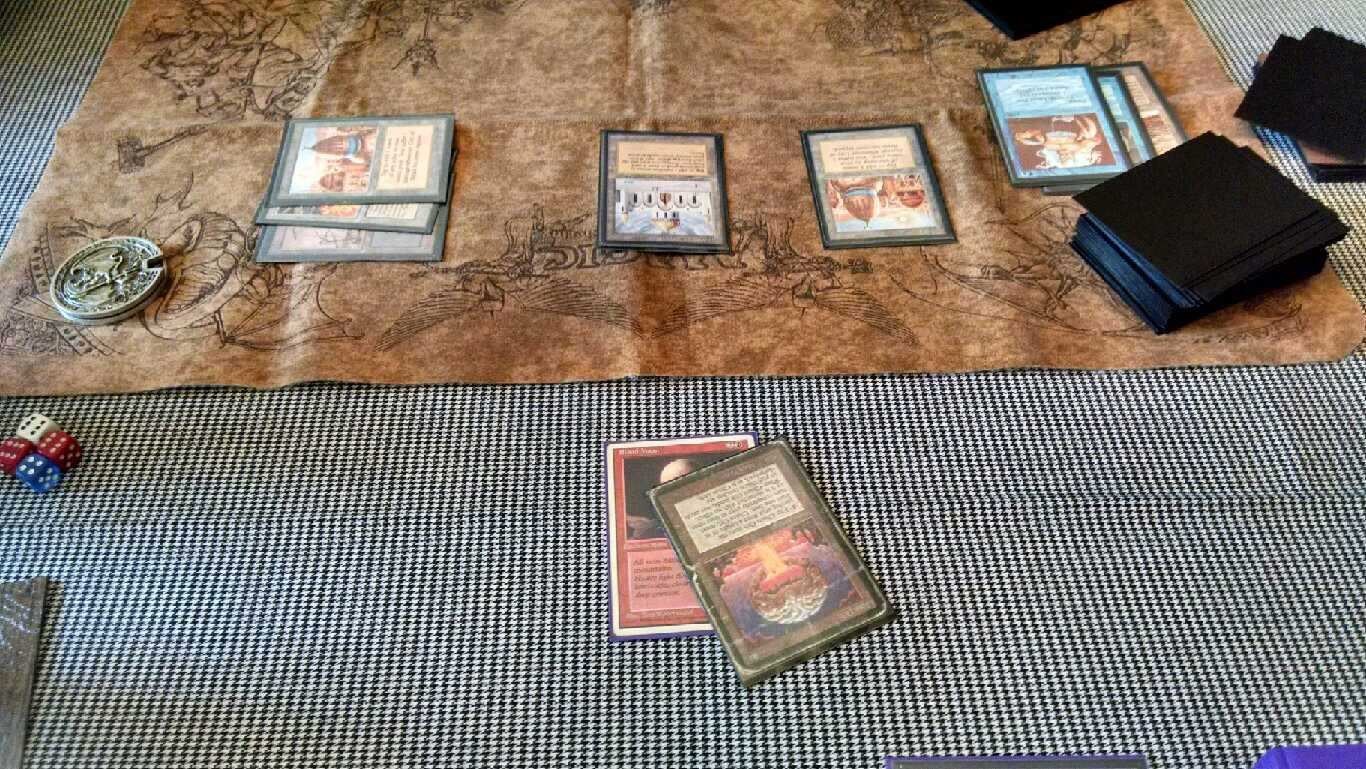 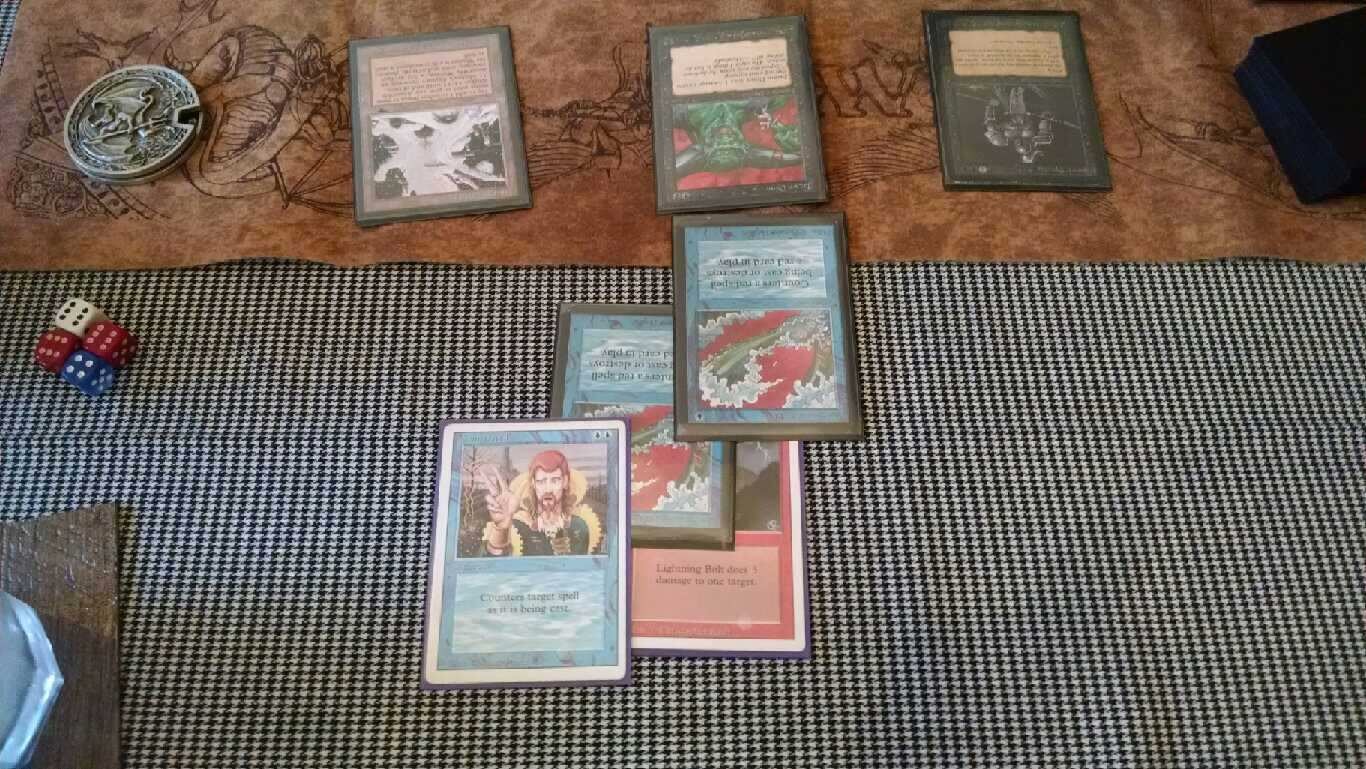 My second match was against Cayce on UR. I played especially cautious against this deck and it seemed to have paid off. Game 1 is a bit fuzzy, but I cast a couple of Mons’s goblin raiders early that stayed on the board for the whole game pinging him left and right. I bolted him a few times while he drew some cards and made me nervous with a full grip. I had two Goblin Grenades in hand waiting for him to tap out. He finally does, casting a Shivan Dragon at 9 life. He passes the turn and I throw 2 Goblin grenades at his face for the game. On to game 2 which is even fuzzier than the first, but it was more of the same. A bit more even this time until I had him down to 9 again. He decided to Chain Lightning me. I chained it back putting him at 6 life. I top deck a Chain Lightning to accompany the one sitting in my hand and resolve both. 2-0 and 1-1 overall for me. 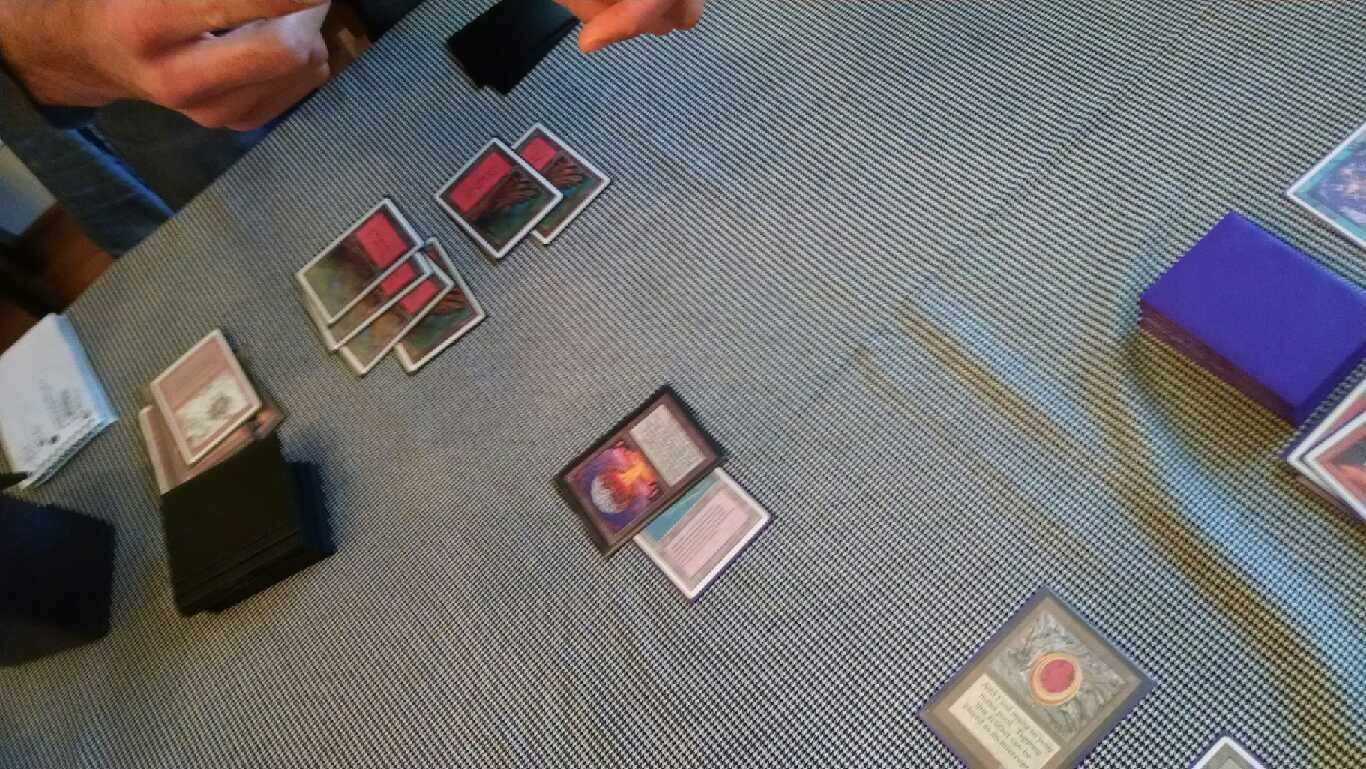 My Chaos Orb was burnin’ a hole in my hand, so I cast it for no good reason. Cayce then Shatter’s it, so I had to flip it on something.

It was a quick match so I was able to catch game 3 between the brothers Bowersox. This was probably the best match of the tournament, WW against UB. It went to 3 games and all of them were pretty grindy. Here’s what I remember. Game 1 I’m blank. Game 2, Brendon was happy with an opening hand and plays Mox Sapphire and strip mine, removing Zack’s only plains leaving him a lone Savannah lions on the board. Brendon then cast an Ancestral Recall during Zack’s upkeep. Zack then plays a Mox pearl and a land tax. Pretty good retort. Zack’s land tax did him well and he eventually assembled a strong army of weenies and a Serra angel, which was just enough to roll over Brendon and take it to game 3. Game 3 was a nail biter. After the smoke cleared, Brendon ended up at 2 life with a pestilence and Juzam Djinn in play while Zack sat at 5 with a Thunder spirit, CoP:B, and a pearl. Brendon top decks a Psionic Blast and cast drain life on the spirit, bringing himself back up to 4, hoping to pad his life total to use the blast and pestilence for the win as Zacks CoP:B was holding off his Djinn. Zack draws, plays a fourth plains, taps two for an Order of Leitbur and passes the turn with 2 land open for his CoP:B. The Juzam pings Brendon down to 3 life and he draws a strip mine which quickly deals with one of Zacks open plains. After some calculations, Brendon just couldn’t get around the knight and CoP:B, not to mention the blast and pestilence were still too much for him at 3 life. The match was Zacks at 2-1, putting Zack at 2-0 overall. We made fun of Zack for putting a Spirit Link on an Icatian Javlineer early on in that last game. It gained him one life, but in the end, it saved him. If he hadn’t gained that 1 point, Brendon’s Psionic Blast would have had him! 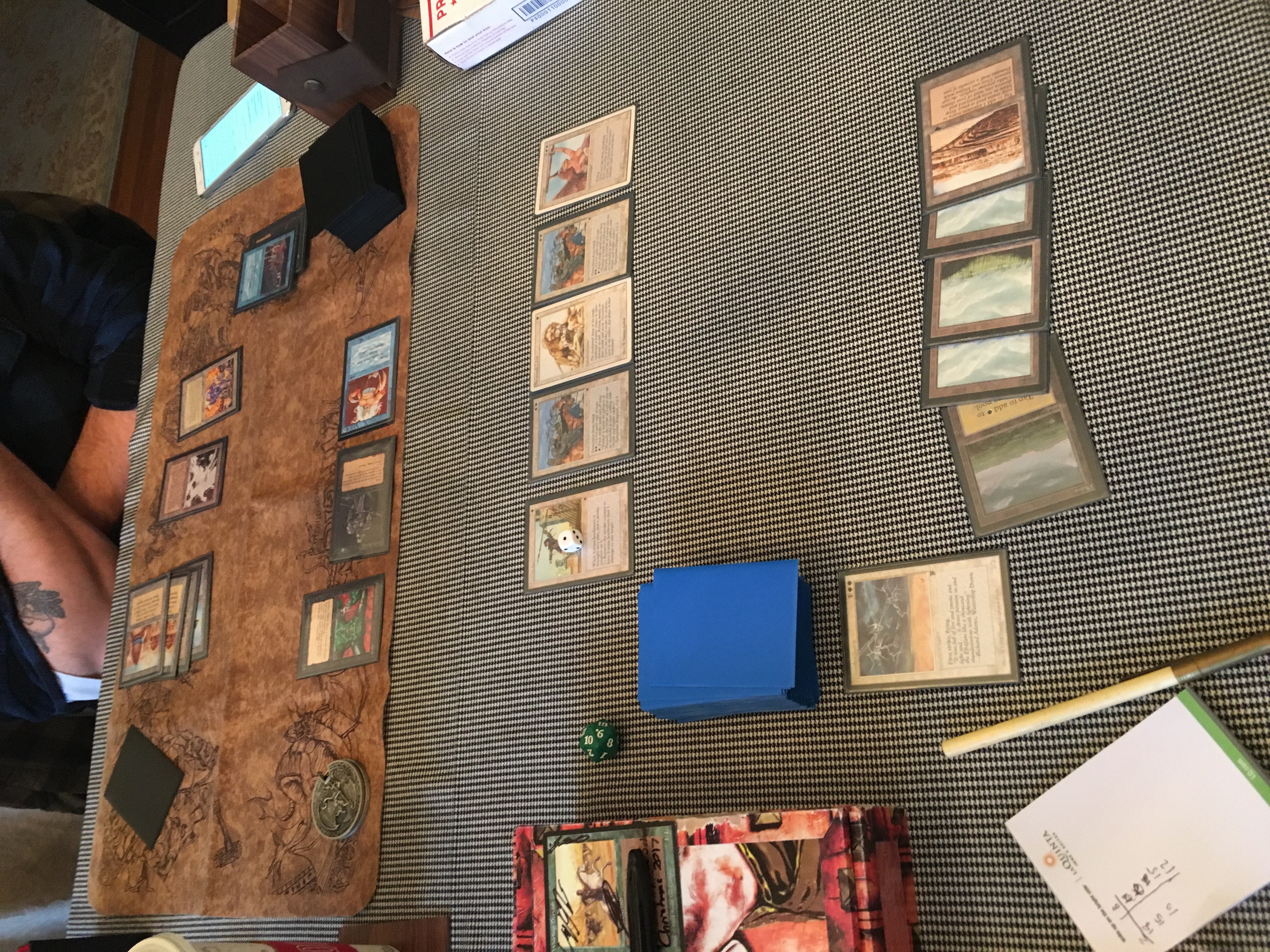 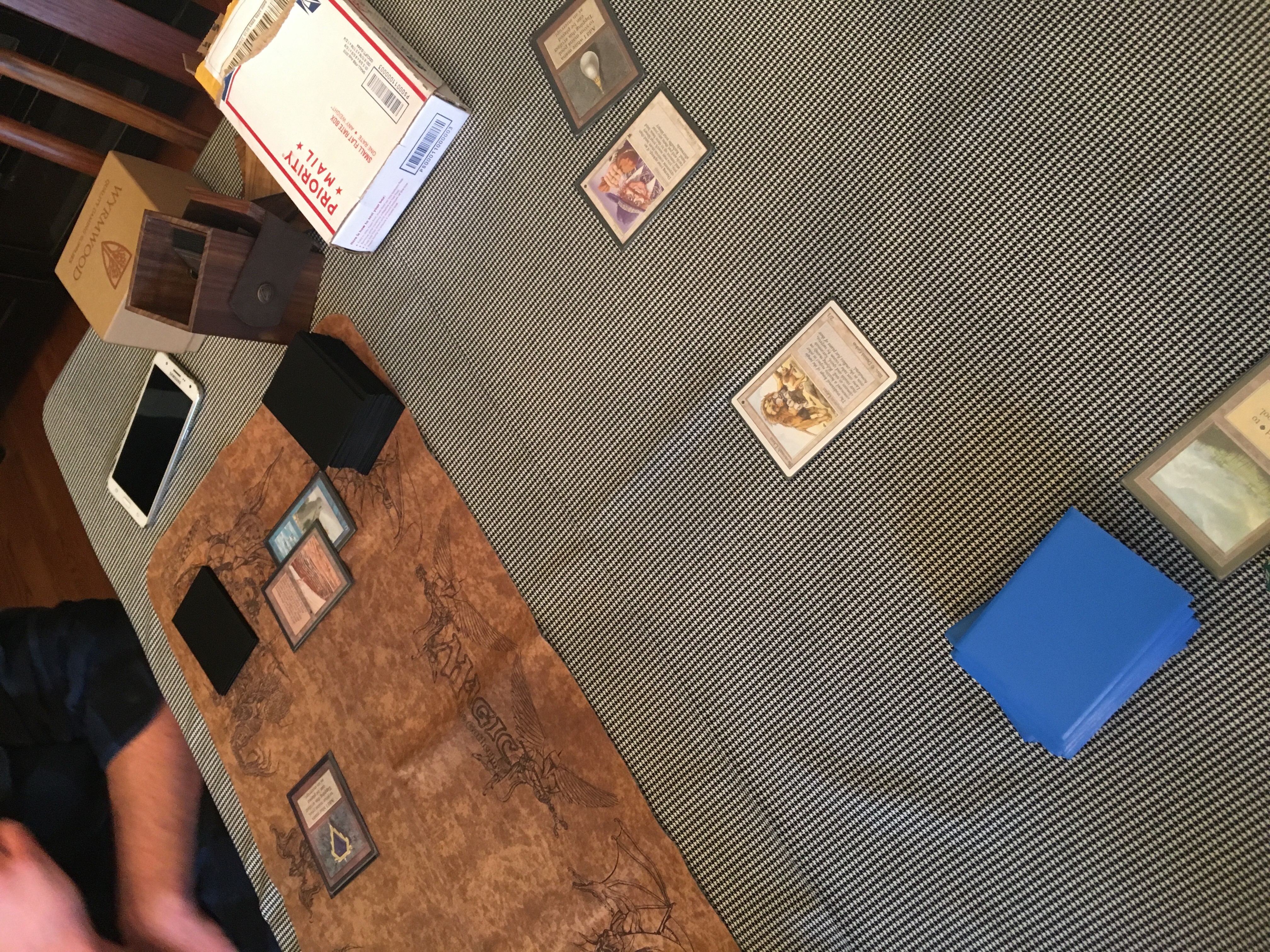 Neck and neck from the start. 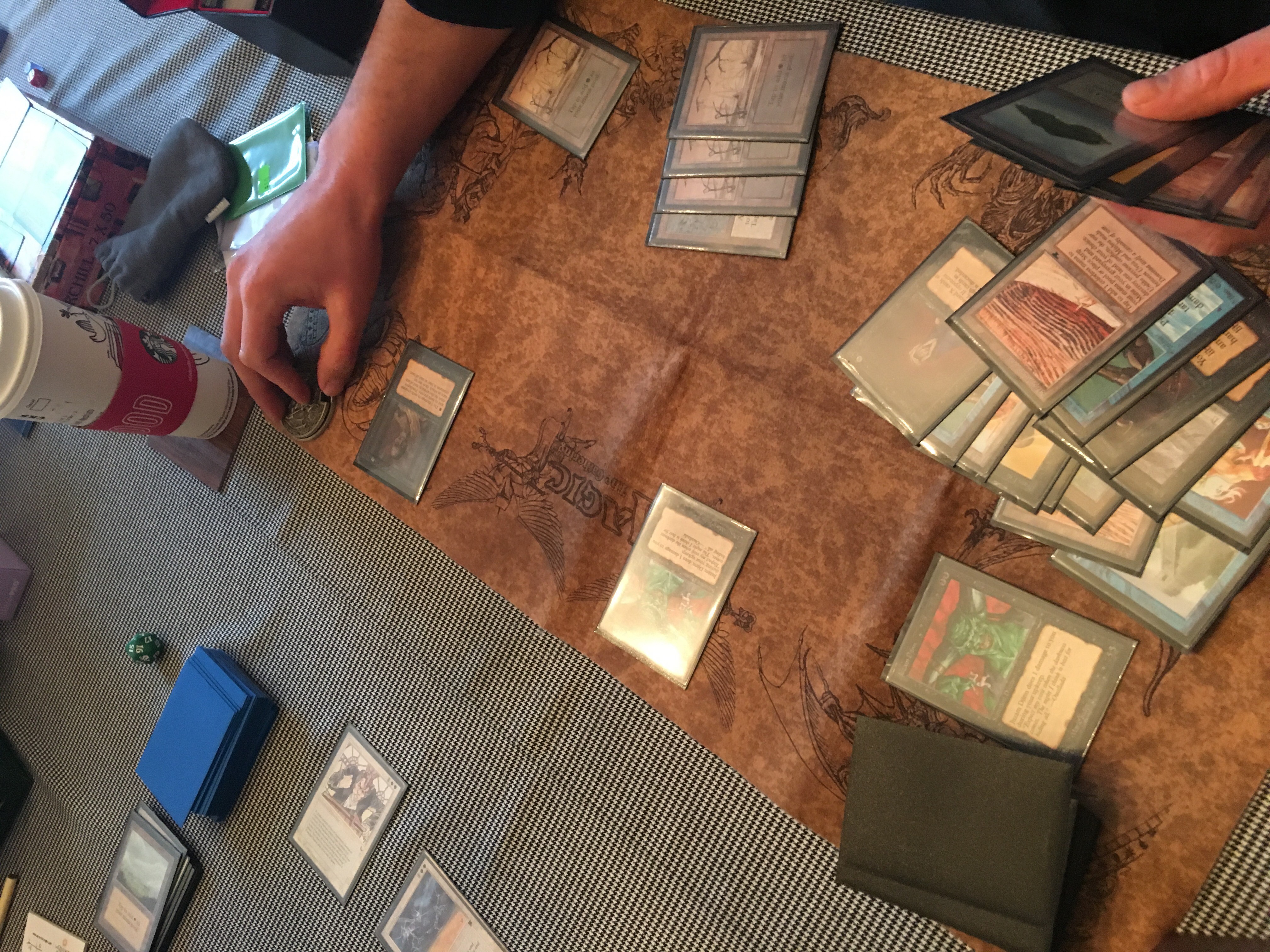 The Preacher and the Djinn. 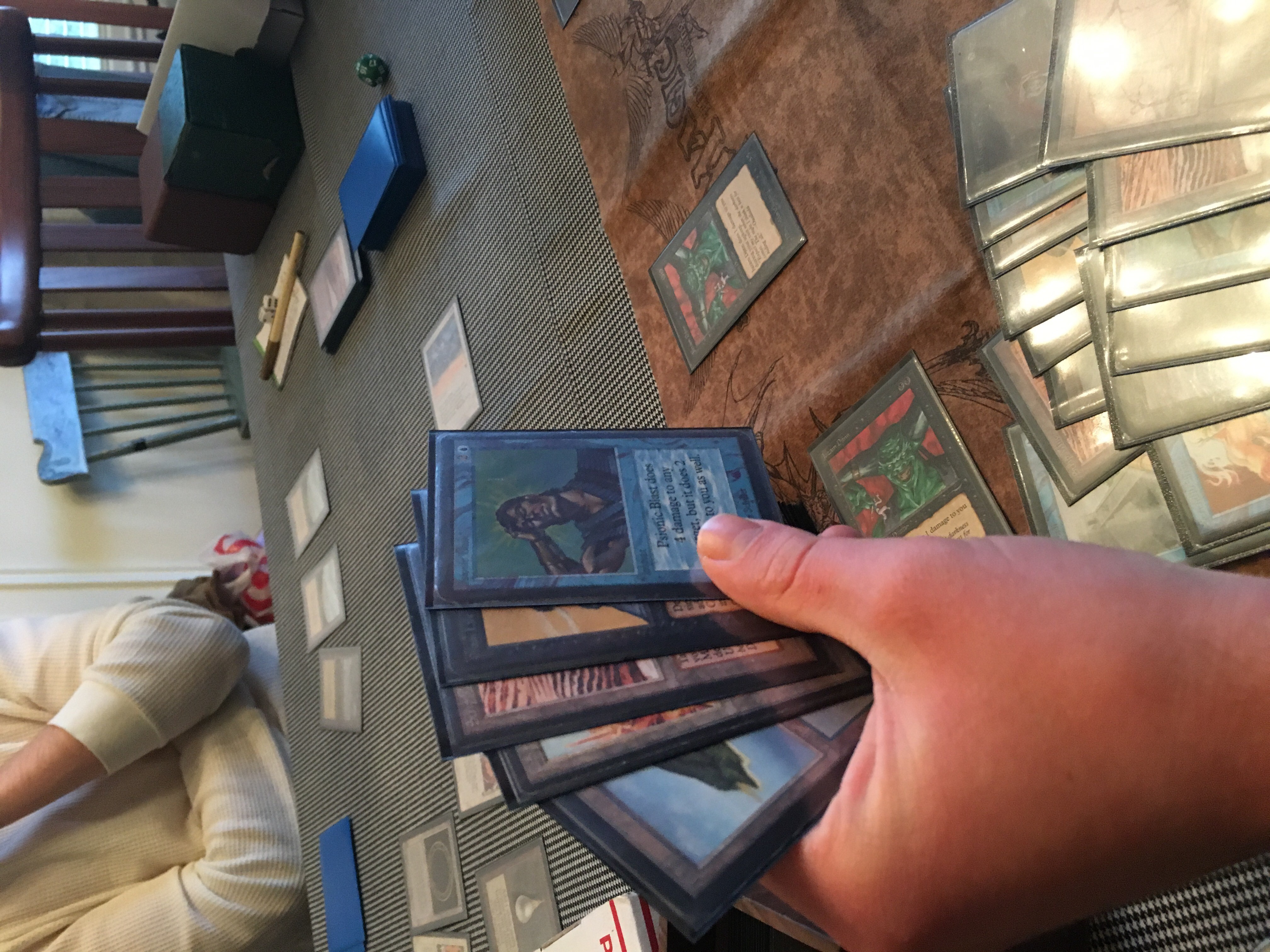 Brendon’s hand after he mentions that he needs to topdeck a Psionic Blast, but Zach is still just out of reach at 5 with CoP:B

Next up was me against Brendon on UB. Cayce was playing Zack and we both we’re hoping he would put a stop to Zacks madness. If he beat Zack 2-0, that would put the winner between mine and Brendon’s match in the finals. Right before our 3rd game of the match, we see that Cayce does in fact come through and stomps Zack’s army of weenies 2-0.

Game 1 of Sligh vs. UB. We go back and forth until Brendon finally gets an upper hand. He has a Juzam djinn on the board with a Hypnotic specter ticking the cards out of my already depleted hand. He casts a Greed and fills up his hand but, in the end he was too greedy (horrible pun), spending around 6 life for cards. I was able to deal just enough damage to him from burn that I top decked so that his Juzam Djinn got him in the end. Game 2 I boarded in Meekstone’s and Red Blast’s. My opening hand was weird. I mull’d and ended up with a better, but just as weird hand containing 3 strip mine, 1 mountain, and 2 creatures. Brendon started strong with a turn 1 Library of Alexandria. On my first turn I immediately hit the reset button and stripped his Library. Brendon then played Swamp, Mox, Sol ring, Dark ritual, and Mind Twist’s me for 4. I played catch up for the rest of the game and it ended in his favor. Game 3 was a blur. I do remember playing an early Meekstone and Ankh of Mishra though. At some point he casts an Energy Flux and I Red Blasted it as I couldn’t afford to lose either of the artifacts and I didn’t have the mana to pay for them and cast threats. Between the Meekstone, Ankh, and a little help from my goblins, I was able to do him in and take the match 2-1. 2-1 overall and on to the finals. 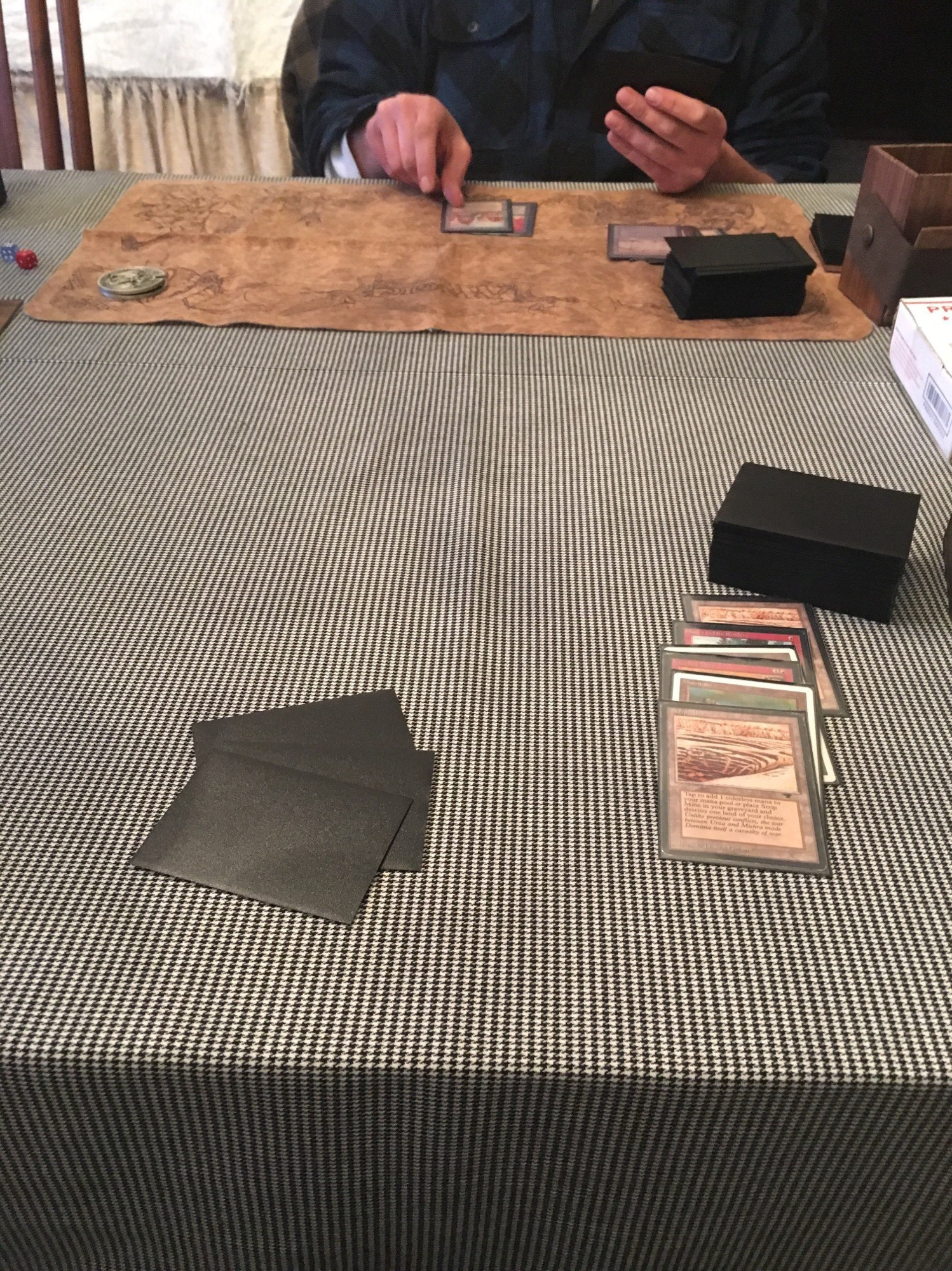 Sorry ass turn 2 board state after a mind twist.

The finals were me (Sligh) and Zack (White Weenie). We decided to have some fun and take it to sudden death Chaos Orb flip’s! I won the die roll and got to go first. We ended up flipping for 11 rounds (1 round being 1 flip each.) We both hit for the first 3 rounds and I missed my fourth. Luckily, Zack did too. Finally, I hit my eleventh flip and Zack just missed. 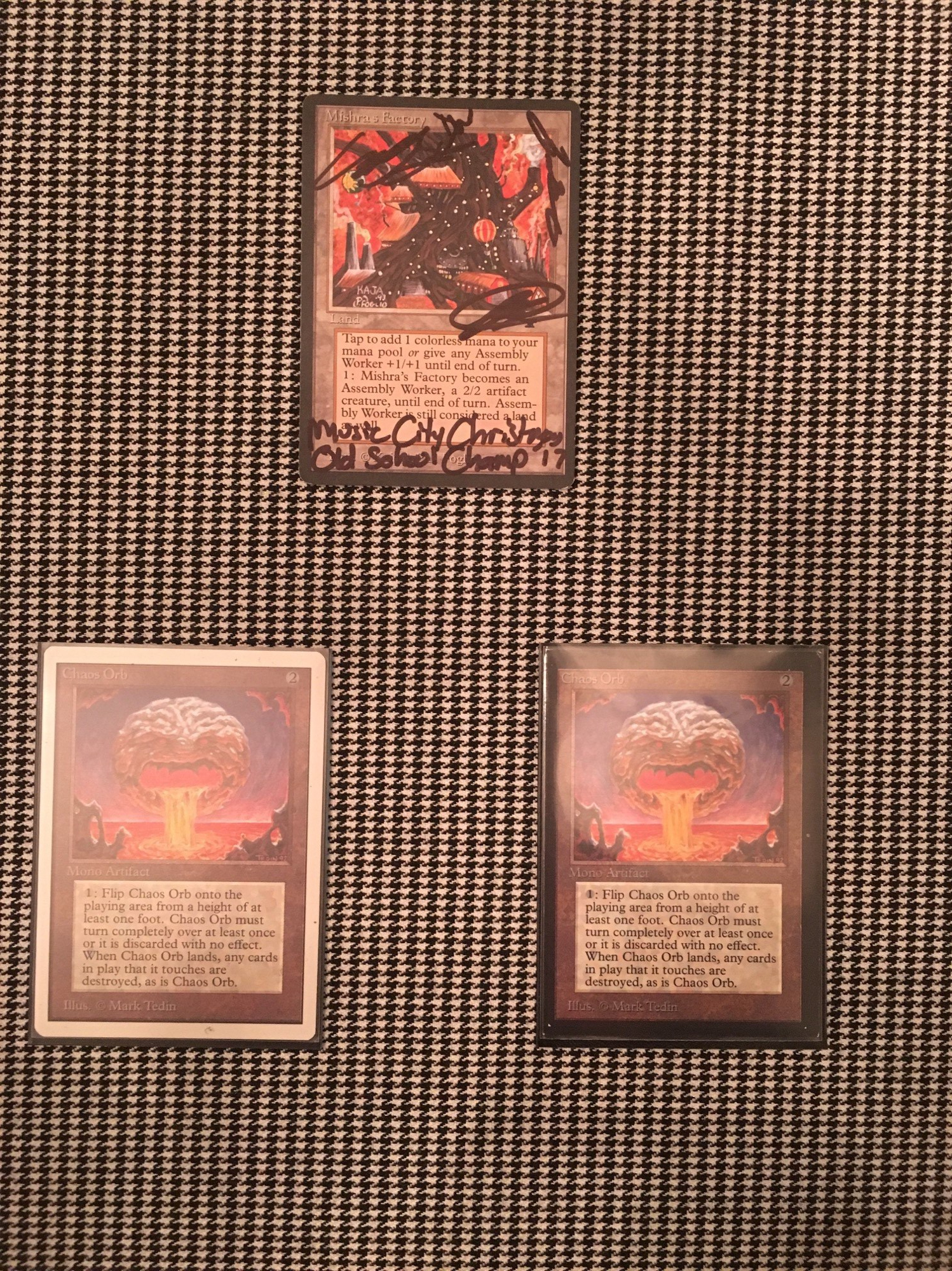 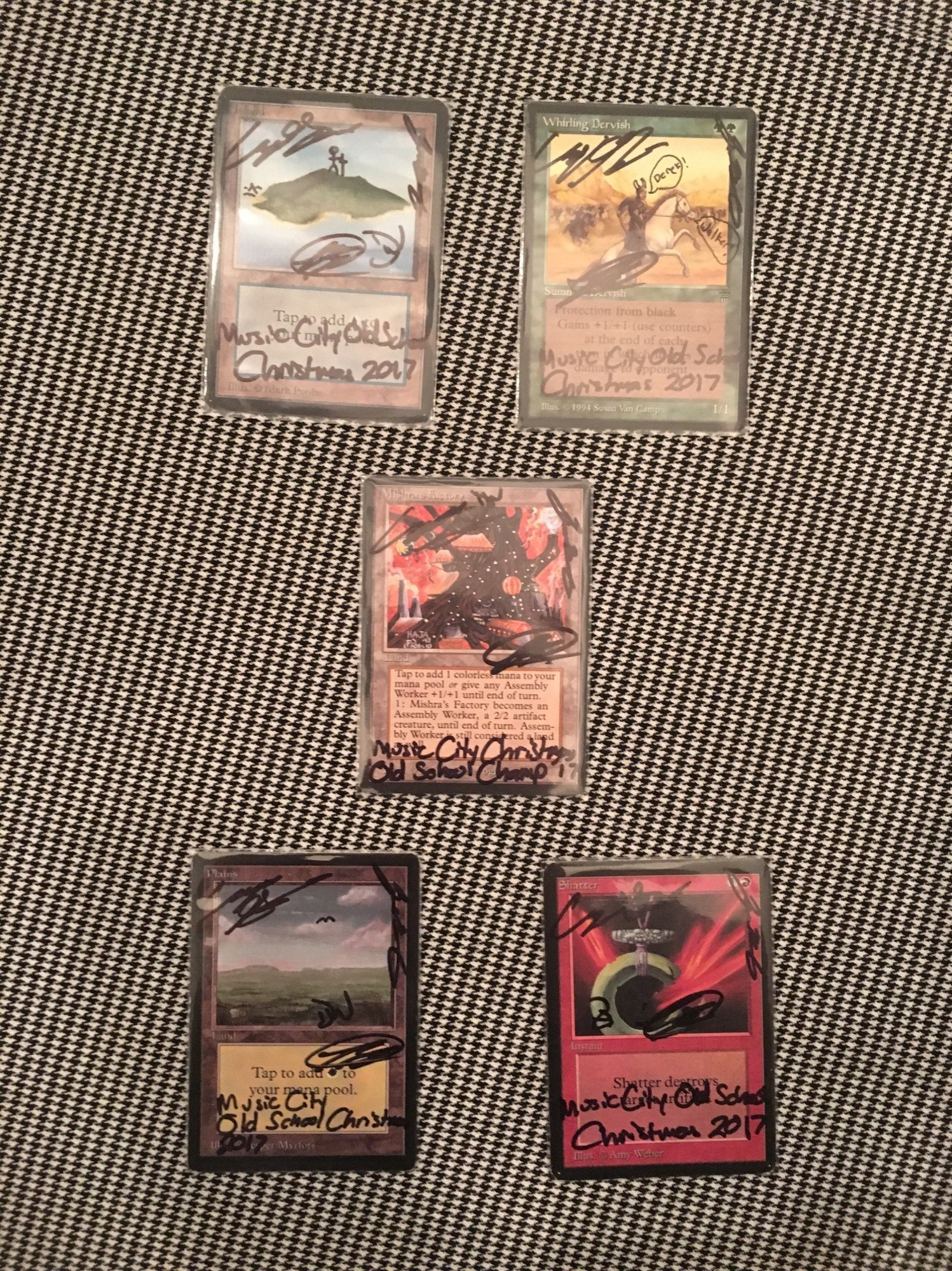 When Brendon found a bit of time to throw together this tournament, I just saw it as another chance to get together with good dudes and play Magic. I’m the least competitive person I know and I for sure didn’t expect my deck to do all that well, but it was fun to win with an un-powered mono red deck with a bunch of orcs and goblins. I’ll go ahead and get a little cheesy by saying Brendon is the true Gingerbread jam champ though. He was kind of enough to provide some of his own Alpha commons to give out and for everyone to sign. Each card tailored so that we’re able to use them in our existing decks, as well as a fall Mishra’s Factory for the winner. He also provided the venue as well as some true southern fried food to grub on after the games. That was very cool of him to give back to the group and it meant a lot, so a big thank you to Brendon! Also, for our entry fee, we all brought donations for Center of Hope charity. It’s great that these old school communities are giving back, so we’re happy to follow in their footsteps. I think I prematurely “capped off” the year in my previous post, so I won’t linger. But, like I said before, we had a great first year. Hopefully we can throw another tournament in 2018 and get some more participants from in and out of town. I know we have some close-ish old school groups in the Tax Men out of Atlanta, and the Lords of the Pit in Chicago. But, even though we only had 4 players, I don’t think it could have been any better. It was a cheers to ourselves. With that, I hope everyone has a great holiday. Drink egg nog and give people cool things. Deck lists and pics below. 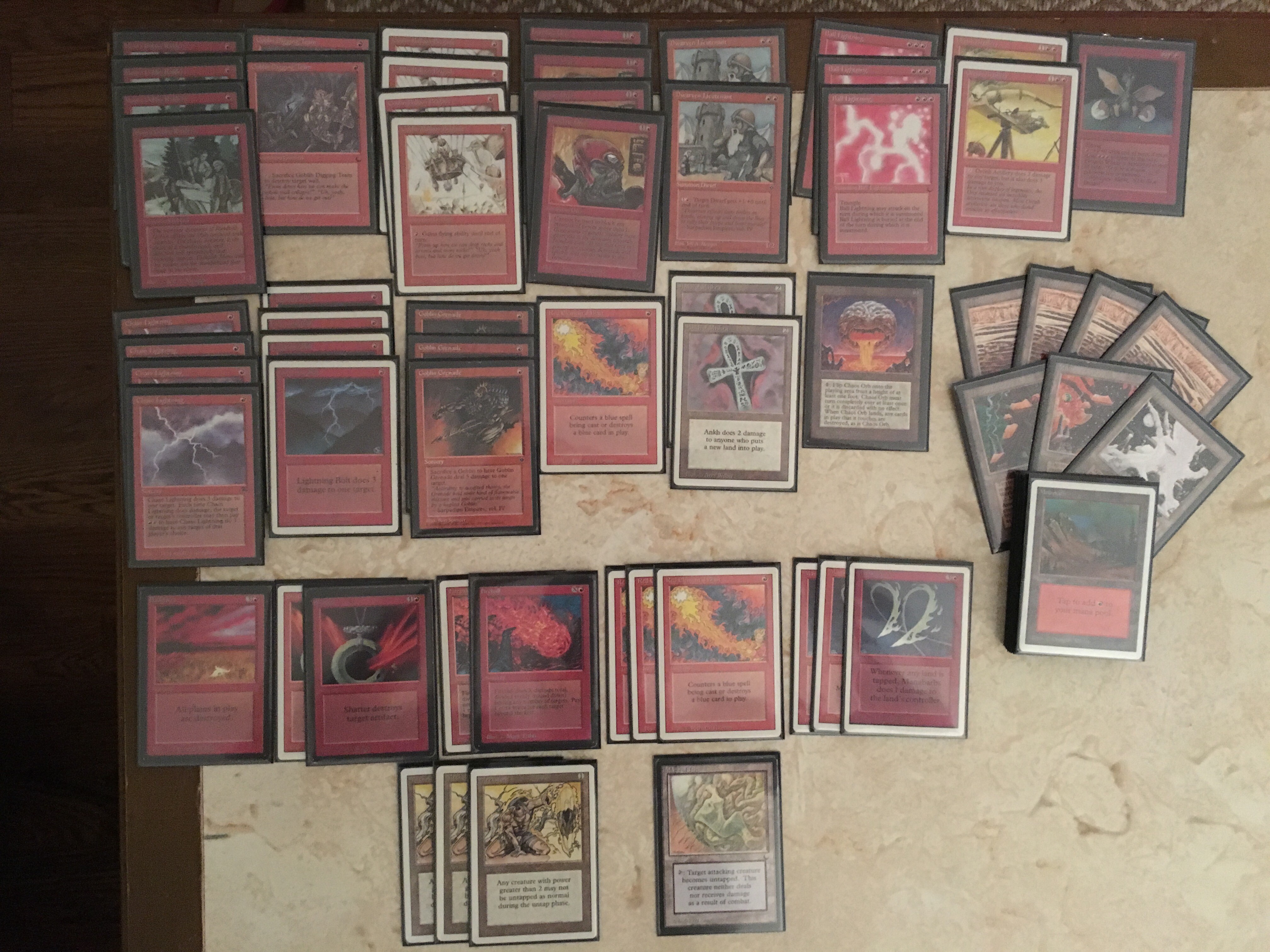 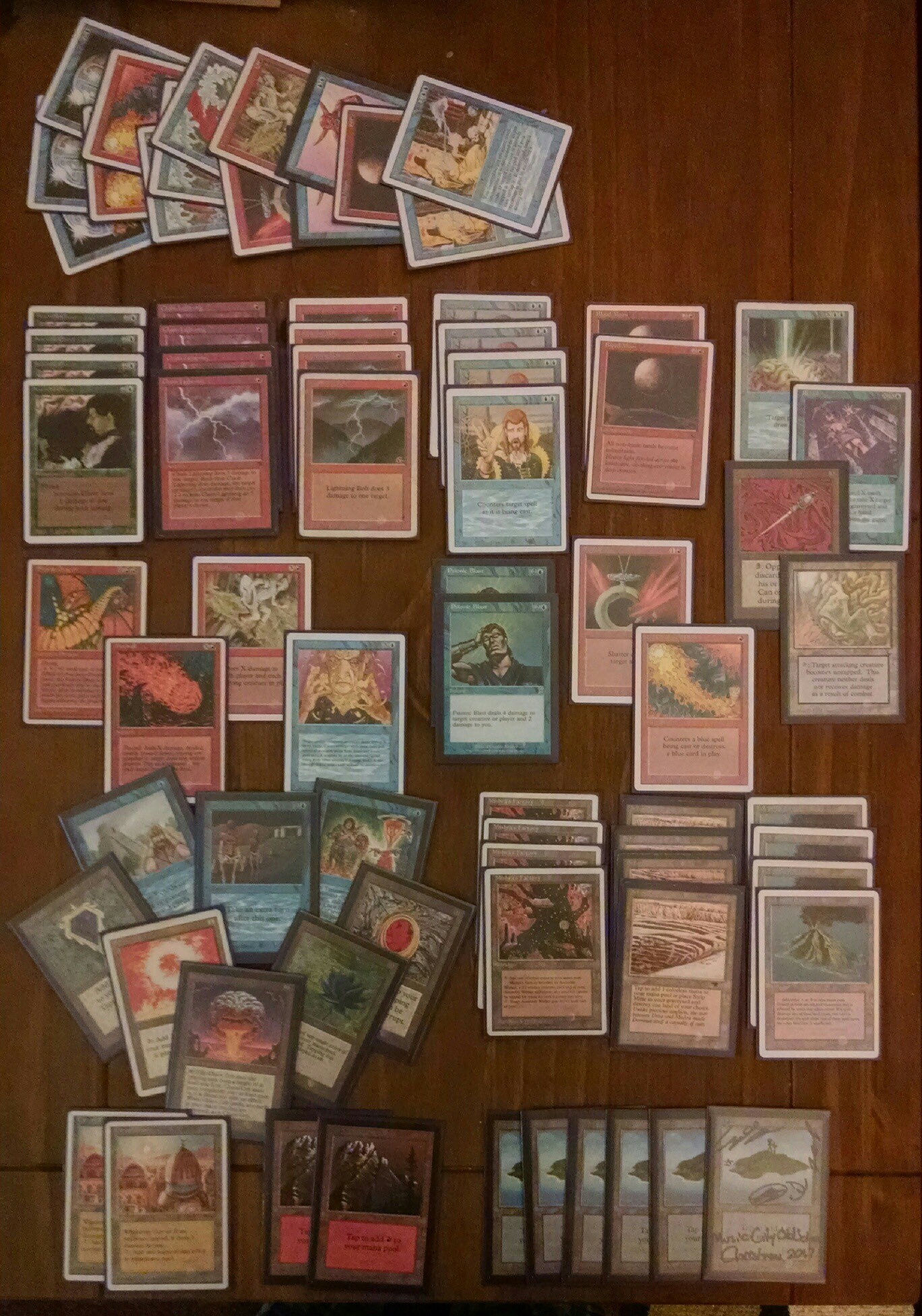